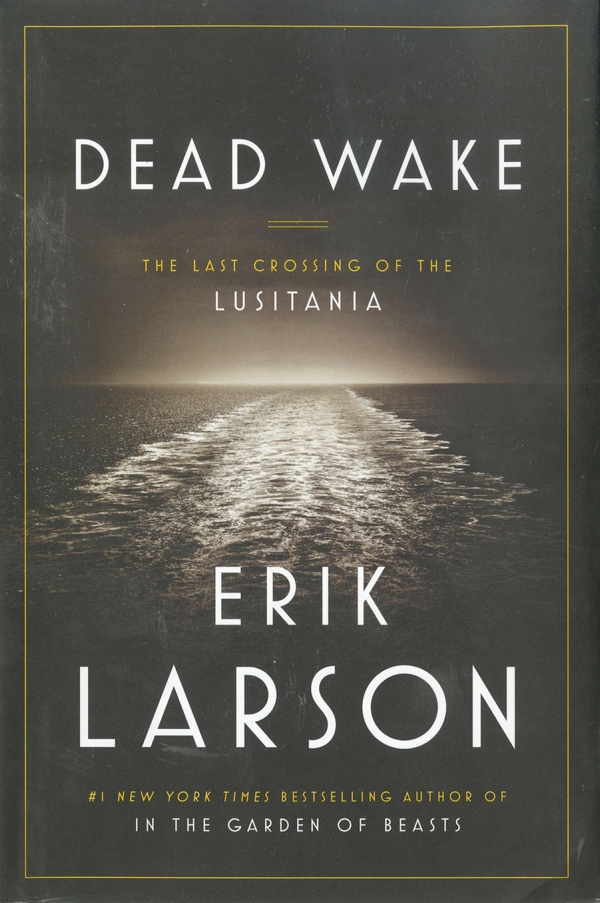 For the final book in the 2015 Summer Reading Challenge, “Dead Wake” is a humdinger.

Very few people know the details about the sinking of the Lusitania. Instead, we have obsessed about the ill-fated Titanic.

But the Lusitania’s sinking, the result of a German U-boat attack, was far more personal. Far more dastardly. The Titanic struck an iceberg. Lusitania was just miles from shore when a German torpedo hit and explosions rocked the ship. In a calm but cold sea, hundreds of people died, some from hypothermia, others from drowning, some from heart attacks.

And no one came to the rescue. Hundreds might have been saved had there not been an order not to rescue ships due to the menace of the German Unterseeboots — U-boats.

The entire incident might have been avoided had the intense secrecy surrounding the British intelligence services’ Room 40 been only slightly relaxed.

Lack of communication, lack of preparedness and lack of understanding plagued the voyage. Like the Titanic, it was believed nothing could sink the Lusitania, and, like the Titanic, something did.

Larson begins with a history of World War I, starting in New York, as nearly 2,000 passengers and crew members prepare to board the ship for a crossing to England. He tells about the strong character of Capt. William Turner, a man who has guided many ships and survives two shipwrecks. Turner will later be blamed by the British Admiralty for the loss of the Lusitania, though the fault lay in numerous hands, chiefly that of Kptlt. Walther Schwieger, commander of U-20, who torpedoes the passenger liner.

Larson tells us a lot about Schwieger, a demon to us, but a war hero to Germany. And Larson makes clear that the submarines of World War I were barely more than metal cans with engines. As often as targets were struck, torpedoes missed. One turned back toward a U-boat, its trajectory suddenly a circle. U-boats had but seven torpedoes, and were instructed to maintain two for their journey back to the Fatherland.

In fact, the author has done such a tremendous job of research in this masterful piece of nonfiction that the story becomes almost surreal. A combination of circumstances, of good and bad luck, of last minute decisions, propels U-20 and the Lusitania on the course that will lead to disaster.

The book also details the political climate of the year 1915 in great detail. Britain is busy spying on Germany, and has cracked the code to their military messages, but they cannot reveal their knowledge for fear of losing what they’ve gained. One could argue now that knowledge is useless without action. War had become a very dirty business, indeed, unlike any war previously fought, with men dying in trenches not just from attack, but from disease and neglect.

Kptlt. Schwieger, as other U-boat captains, is largely detached from what he does. He fires the torpedo, then carefully sticks his periscope up to see the results from a relatively safe distance. U-boat captains do not pick up survivors, for the most part, so it’s a shot, an explosion and an escape, lest the U-boat be spotted and attacked. Several U-boats are spotted, and because they move so slowly, a swift vessel can ram the submarine and sink it.

Schwieger looks a little longer at Lusitania, first pleased he has hit a boat of such huge tonnage. When he begins to see people pouring into the water, including women and children, he has to turn away.

Meanwhile, Woodrow Wilson is grieving the death of his first wife and determined to remain neutral in this European war. The country is not far from the devastating Civil War  — the last thing peaceful Wilson wants is war.

Larson’s descriptions of Wilson’s favorite activity, going out for a drive in his Pierce Arrow, seem remarkable today. Imagine a president going out for an unattended drive. Later, when Wilson finds widow Edith Galt a solace and a sounding board, they go for afternoon drives. Such a courtship would be impossible now. Larson suggests Wilson’s mind was not fully on the presidency, but on the loss of his wife, who was his chief adviser, and then on his new object of trust and affection.

As the boat sails the Atlantic, Larson tells us about the passengers, from Charles Lauriat, a famous publisher, to the family who travels with their six young children. We meet progressive women like Theodate Pope, who was a friend of author Henry James, and Dwight Harris, traveling to England to get married.

They all become real to the reader, a collection of normal people going about their normal lives. Were they afraid of the warnings they had heard about U-boats off the coast of Ireland and England? Most were unconcerned. After all, the Lusitania had a top speed of 25 knots — one of the fastest boats afloat. It could easily outrun any slow-moving U-boat. Plus, hadn’t Capt. Turner reassured them about the sturdiness of the hull?

A few passengers held on to their concerns, and were more prepared than others when the attack occurred. Even that did not guarantee their survival.

The details of life aboard a U-boat create the smoky, hot, damp atmosphere aboard. Diesel engines move the boat and charge batteries needed for underwater movement. The odor hung in the air, along with the scent of cooked food, sweaty bodies that had not been bathed in weeks and cigarette smoke. Occasionally, the ships had to surface to bring in fresh air. A prolonged dive could lead to massive condensation problems, as the ship was hot and sea was cold, leaving yet another smell — mold.

Closed in their own world, as the Lusitania existed in its own world, the U-boat adhered to its mission, sinking boats that might be supplying the British. The Lusitania, for its part, was carrying guns and ammunition in its hold, along with luggage and supplies.

The Lusitania was moving along well, but nowhere near 25 knots, as one of the four boilers was not in use to save money. And the hull, loaded with coal for the boilers, was emptying as the ship made its way.

While the ships move through the Atlantic, tensions run high in Britain as the war continues. Room 40 held secrets even the British government was not made aware of. Here we meet a younger Winston Churchill, part of the intelligence service. Larson teaches us about what’s going on in Europe and America, why America is so reluctant to aid its allies in the fight.

When the ship is hit, and begins to sink, Larson uses those 18 minutes — just 18 minutes — to tell us what he has learned about the passengers floating in their life vests, huddled in one of the few boats that were launched properly, about people holding on to bits of debris, about desperate searches for loved ones in the chaos. Time moves in slow motion for some, others panic. Some resolve themselves to meet death, while others struggle to survive. People sacrifice themselves to help others.

Most of the children, whose small bodies could not stand the cold, die. Some passengers are sucked into the vortex of the sinking ship. Some pop back to the surface, some do not.

A ship moves from harbor to rescue them, then turns back with the warning that more U-boats are likely. It was a calm, clear, warm spring day, beautiful, by all accounts.

Survivor Margaret Mackworth thought she might already be dead. “I wondered, looking round on the sun and pale blue sky and calm sea, whether I had reached heaven without knowing it — and devoutly hoped I hadn’t.”

After the disaster, Turner is immediately charged and aggressively prosecuted, but is cleared. America hesitates a bit longer before reluctantly joining the war. Survivors return to their lives. Sadly, some never recover mentally or emotionally. One commits suicide. The horror they lived through is too much to live with.

Publisher Charles Lauriat wrote a book about his experience, “The Lusitania’s Last Voyage.” It became a bestseller.

“Dead Wake” is a fascinating piece of history that most Americans know little about. Larson puts the myriad pieces together into a compelling and complete narrative that puts the reader on the deck or in the submarine, in Wilson’s Pierce Arrow and floating in the calm, cold sea.

Join us Tuesday, Aug. 18, 7 p.m., at Rowan Public Library for a discussion of ‘”Dead Wake” lead by Steve Cobb.