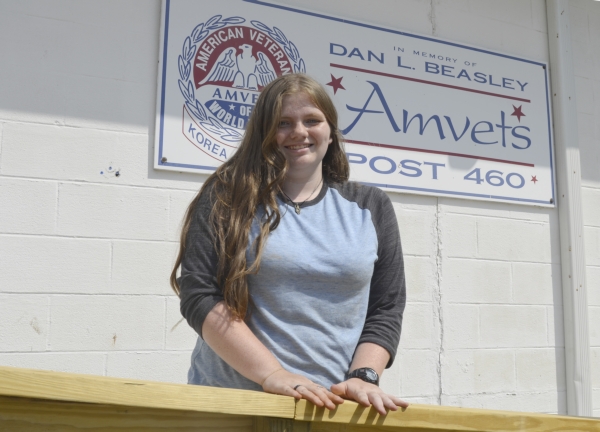 Amelia "Millie" Small stands at a wheelchair ramp at the AMVETs Post 460, located off Goodman Lake Road, which she was instrumental in coordinating for her Girl Scout Silver Award project. The 15-year-old spent two months on the project and completed it on Friday. Shavonne Walker/Salisbury Post

A few months ago Amelia “Millie” Small looked out of her school bus window and noticed a deteriorating set of steps and handicapped ramp leading up to front door of the AMVETs Post 460 when she was struck with an idea.

The Post, located off Goodman Lake Road, needed an updated set of steps and a ramp and Millie needed an idea for her upcoming Girl Scout Silver Award project. Two months ago, she contacted the veterans and began putting her plan in motion.
The project, similar to a Eagle Scout project for the Boy Scouts, needed to be something the Scout could complete from concept to finished product. Millie’s project needed to be 50 to 60 hours and needed to be something that would be a life altering experience or event for someone else.

She submitted her paperwork in March and received approval from her Council — Hornets Nest of Kannapolis.

Millie, along with the veterans at the Post, held a barbecue fundraiser and raised about $1,100, she said.

Her parents, Frank and Conita, also were a big help, even helping to finish the wooden handrails and replanting the flowers and shrubbery in the front of the building.

She began the project by obtaining permits for the impending work, which included wooden handrails and concrete ramp.

Of what she’s learned through the process, Millie said she’s learned about handiwork, the permit process and about running a small business.
She didn’t realize how much work would be involved. Later this month, Millie will attend an award ceremony with others who have also completed Silver Award projects.

“She’s worked diligently on her part and we are very appreciative,” said Jim Bean, Post commander.

He said the work that Millie put into the project meant a lot to the veterans.