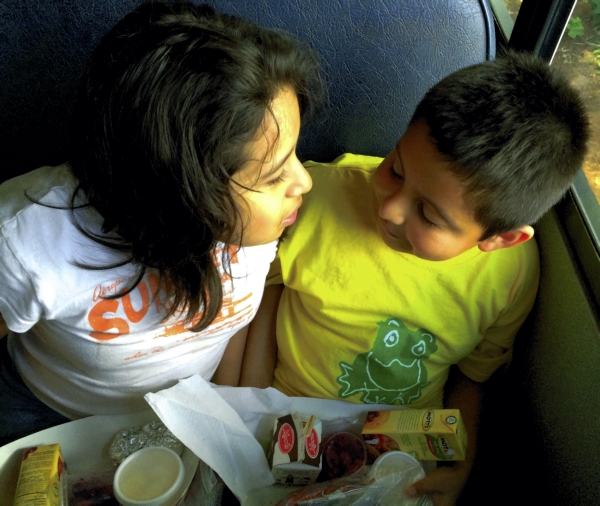 Ichel Hernandez and Tadeo Hernandez said they like the food they get through the summer meals program. Jeanie Groh/Salisbury Post

The E-3 (Extraordinary Eating Everyday) bus will join Rowan-Salisbury’s Summer Meals Program next year. The inside has been gutted and now includes small cafeteria tables for children to eat their lunches. Jeanie Groh/Salisbury Post

Next year, the Summer Meals Program will have a cool, new addition. The E-3 bus will hit the streets to deliver meals to children.

The bus was retired from the school system’s bus fleet last year, and was donated to the Child Nutrition program.

But it doesn’t look like a yellow school bus anymore. The passenger area of the bus was gutted and half-sized cafeteria tables were installed. There’s room at the front of the bus for food containers, warmers and coolers, and side seats will be installed for food service workers to ride along.

The outside was painted by inmates at the Rowan County Detention Center, then it was wrapped with a colorful design by Richard Childress Racing. The design, which features cartoon fruits and vegetables, was designed by Child Nutrition employee Debbie Isley.

Altmann said she’d love to install a horn that plays “The Wheels on the Bus Go Round and Round” to “give it an ice cream truck effect.” She also plans to play music to create a fun experience for the children.

“We want the kids to enjoy the bus,” Altmann said.

“We hoped to get it out this summer,” she said. After one day on the road, however, they realized they needed air conditioning before they could put it to use.

She added that use of the bus isn’t limited to the Summer Meals Program. They’re in the early stages of talking about different ways to use it, she said. It could be used for virtual fieldtrips or nutrition education in the schools.

On average, the program’s staff distributes 1,500 breakfasts, 1,850 lunches and 650 snacks every single weekday.

Making and delivering that food is no easy task – it takes 24 staff members, two buses, five moving trucks, a van and a truck each day.

“You come through the door and start running,” Wanda Pender said as she explained their daily routine.

They cook or prepare both breakfast and lunch at Carson High school, individually wrap it, divide it, load it and send the vehicles out. After breakfast, they reload the vehicles with lunch and send them out again. Both hot and cold food is packed in special cooling or heating containers to keep the meals at a healthy temperature.

When the vehicles go out to the sites, one driver and two staff members are on board each. They hand out the food and supervise the children while they eat.

Because the USDA grant specifically states that the food must be eaten by the children, they are required to eat their breakfast or lunch at the Summer Meals site.

“We don’t have many leftovers,” she said, but added, “We never run out.”

If one group is running low, they’ll call the others to bring them more food.

Altmann said their numbers soared this year mostly because of the hard work of school nutrition managers Carolina Hernandez and Cindy Trexler.

The pair went door to door in the neighborhoods near their Summer Meals Program drop-off sites and handed out fliers to families with children.

They also added sites after realizing that families were traveling to one particular site to feed their children.

Meals are served in a one-week cycle. There are three hot and two cold lunches served each week. Originally, there were more cold lunches, but they adjusted when they realized the children liked the hot meals better, Altmann said.

There’s an overall sense of gratitude at each of the meal sites. The Summer Meals Program coordinators are grateful for the opportunity to bring meals to local children in need.

“We see them (the students) hungry all school year,” Altmann said. “We worry about them.”

She added that it’s good to know they’re being provided with meals.

The students and parents are also thankful for the meals.

Southeast Middle School seventh-grader Claudia Pineda said her family found out because Hernandez knocked on her door to tell them about the program.

“We came because it was free,” she said.

She added that her favorite meal is the burgers they get each week.

“The food is good,” she said as Claudia translated.

“She said she can’t feed us all at the same time,” Claudia added for her mother.

Knollwood fifth-grader Mayrani Lopez said she comes to the Summer Meals Program each day with her brother and sister. She said she knows to come out when she hears the bus horn.

Hunger is much more than missing a meal, Altmann said. It’s a symptom of a much deeper problem – poverty.

“I think we’ve only hit the tip of the iceberg,” she said.

In the city, pockets of poverty are saturated, and easy to reach. In the more rural areas of the county, however, they’re more spread out and harder to identify.

Altmann added that the Summer Meals Program is doing a good job of reaching the southern and western areas of the county, but there remains a lot of need.

“There’s definitely a big need in the eastern part of the county,” she said, adding that their goal is to eventually have three or four buses delivering food each day.

SALISBURY — Addie Glover Ketner seemed to part of a lot of firsts. She belonged to the first graduating class of... read more