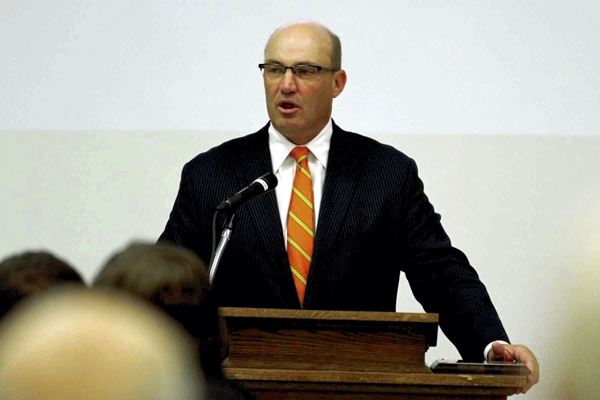 Kendall Alley, former North Rowan and Clemson student athlete, accepts his induction into the Salisbury Rowan Sports Hall of Fame at the Civic Center. James Sipes, for the Salisbury Post

SALISBURY — Salisbury-Rowan Sports Hall of Fame inductions took place at the Civic Center on Sunday, and a favorite topic of pre-ceremony conversation was guessing how long the speech given by inductee Bob Hundley would last.

Hundley is widely known for two things — coaching North Rowan’s 1986 state-championship basketball team and for being a man of few words.

“Bill Kesler and I were talking,” said Bobby Hundley, Bob’s son. “Bill said Dad wouldn’t speak over two minutes. I told him I’d bet everything I own he wouldn’t come close to two minutes.”

The son knows the father. Bob Hundley’s acceptance speech would have fit comfortably on a napkin.

“All of you who know me know I’m not going to give a speech,” he drawled, shortly after taking the podium. “Thank you very much.”
Most of the folks assembled knew Hundley well and they roared with laughter.

It was a day filled with humor and included Hall of Fame committee chairman Wilson Cherry dunking an imaginary basketball over the shoulder of 6-foot-5 inductee Andre Godfrey.

But on a day when the Hall of Fame welcomed seven new members — Hundley, Godfrey, Kendall Alley, Ralph Kitley, Dean Sheetz, Ralph Ellis and the late Oatten Fisher — there also were solemn moments.

Fred Evans, one of the most passionate and dedicated members of the Salisbury-Rowan Sports Hall of Fame committee and one of its founders, passed away in June. His contributions as a civic leader and outstanding coach were acknowledged and his family was honored with a plaque.

Fisher’s induction brought both joy and sadness, as one of Salisbury’s sports legends — football, baseball and wrestling — lived in an era of limited opportunity for black athletes.

A 1943 graduate of Salisbury’s J.C. Price High, Fisher was one of the first blacks to play professional football in Canada. He was an all-league tackle three times in the 1950s and had a dazzling, 92-yard interception return that once made him Interprovincial Rugby Football Union Player of the Week.

Fisher’s son lives in California and was unable to attend the ceremony, but he sent a letter thanking Salisbury for remembering a great athlete “born too soon.”

Godfrey may be the county’s greatest late-bloomer. After averaging 8.7 points per game for Hundley as a North Rowan senior in 1985, he entered military service.

“He was a little, skinny guy in high school, but then he got bigger, stronger and better,” Cherry said.

The record book doesn’t dispute that. Godfrey is in the Catawba Sports Hall of Fame.

Playing for Sam Moir’s Indians from 1988-1992, Godfrey scored 1,673 points (fourth all-time) and ranks third in school history in scoring average. He stuffed stat sheets. He also ranks in Catawba’s all-time top 10 for rebounding, steals and blocked shots. Godfrey was the SAC tournament MVP in 1991 and the 1992 SAC Player of the Year.

Hundley, who coached North Rowan to 136 baseball victories and 274 basketball wins (second in Rowan boys basketball history), had the distinction of coaching two of Sunday’s inductees in high school. Besides Godfrey, he coached Kitley, the 6-foot-10 son of a Methodist minister.

Kitley is now the principal at Northwest Guilford High (his 14-year-old daughter will be one of his pupils this year) and gave credit for his post-basketball success to Hundley.

Kitley made a bad decision to skip a class during the 1985 season, and to his dismay, Hundley benched him for the North Piedmont Conference tourney championship game against North Davidson.

Recruited by dozens of schools, Kitley went on to Wake Forest. He played in 108 games for the Deacons.

Kitley had a 22-point game against N.C. State, but his biggest thrill was winning that 1986 state championship at North Rowan. The Cavaliers were 29-2, with both losses, including one to South Meck, by a single point.

Alley excelled at North Rowan in football and baseball and also played basketball for a year.

A Shrine Bowler in 1978, Alley caught passes from Bobby Myers and was the Cavaliers’ first 1,000-yard receiver. He also starred at safety.

Alley was a receiver on Clemson’s 1981 national championship football team and played on two more top-10 Clemson teams in 1982 and 1983. In that championship season, he made two key receptions in a win against defending national champ Georgia.

Alley has been ultra-successful in the banking industry after football and is a regional president at Wells Fargo.

“My North Rowan coaches and Coach (Joe) Ferebee with American Legion baseball taught me values,” Alley said. “Sports have been instrumental in my business career.”

Sheetz was an athlete at China Grove High in the early 1950s when the China Grove-Landis rivalry was fierce in southern Rowan, and the Landis roster included legend Billy Ray Barnes.

Barnes and Sheetz had their battles on baseball diamonds and in basketball gyms. Sheetz was small but fast and scored 20s and occasionally 30s for a fast-paced China Grove hoops team that tied for second place behind Landis in 1953, his senior year.
“Standing room only whenever we played Landis,” said Sheetz, smiling at the memory.

Like Godfrey, Sheetz blossomed after high school. He became a dynamic athlete for Piedmont College in Demarest, Ga., and is in that school’s Hall of Fame.

Sheetz also accomplished a lot on golf courses. He won the Charlotte City Amateur three times. He had strong finishes in the N.C. Amateur and U.S. Senior Open and he’s been a winner in the Labor Four-Ball Memorial Tournament at the Country Club of Salisbury.
One of Sheetz’s playing partners in the 1990 U.S. Senior Open was Jack Nicklaus, who was making his Senior debut. Sheetz overcame understandable butterflies to shoot 74, and he led Nicklaus at the turn.

“I was good friends with Horace Billings,” Ellis said. “So this award means a great deal.”

Ellis was a multi-sport athlete at West Rowan in the early 1970s before graduating from Livingstone.

He’s contributed to youth track all over Rowan County and he’s been an integral part of West Rowan athletics as a football, basketball, tennis and track coach.

Ellis told the story of how Fred Evans got him his first teaching job coming out of Livingstone — and he’s never stopped coaching and mentoring young people.

Ellis is starting his 34th season of coaching football at West. He claims this will be his last.

“When I don’t show up next year, I guess they’ll know I’m not coaching,” said Ellis, drawing one last laugh from the crowd.
The new inductees bring the Hall of Fame’s membership to 94.