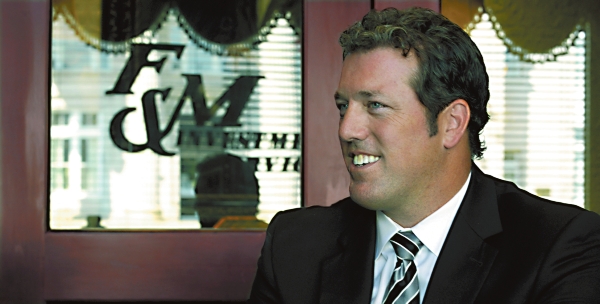 Steve Fisher strides into the conference room, wearing a black business suit with gray striped tie, and a sheepish grin on his face.

“I need a haircut,” Fisher admits.

To be sure, he still claims a full head of curly dark hair, only showing a touch of gray. But Fisher, 49, has also had a full schedule since taking over as chairman of F&M Bank on May 28. He’d added the CEO title two years before.

In joining the bank, Fisher became the third generation of his family do so, after his grandfather, J.E., and his father, Paul.

Yet working at the bank was never in his plans.

The 1984 East Rowan grad left Rowan County bound for the University of North Carolina at Chapel Hill. He later received dual business and law degrees from Wake Forest University, then lit out to Atlanta to find his fortune.

His thought back then was the same of many peers in his generation: This town can’t hold me. It’s too small.

Along the way, he married Robin Ennis, his high school sweetheart, and joined a law firm in Buckhead. Things were going great. One son had been born, another was on the way, and Fisher was offered a partnership with his law firm.

Fisher and his wife knew that Atlanta was not the city in which they wanted to raise their boys. He knew he had a choice to make.

So he called his father back in Salisbury — and asked for a job.

“I was pleased,” Paul Fisher says. “I did not have any expectation he would come back home.”

“I loved what I did in Atlanta,” Steve Fisher says. “But in my job, I moved large amounts of money out of one corporation to another. At the end of the day, I had nothing to show for the work. I hadn’t done anything to make the community better.”

He wanted a place he could make a difference, and that place was Salisbury and Rowan County. Fisher joined F&M in 1998 as senior vice president and general counsel.

A third son was later born, and the Fishers’ boys are now teens: Banks, 19, Max, 17, and Jack, 14. They’ve all grown up on the soccer field, and Banks plays soccer for UNCC.

It’s what Fisher wanted for his boys, a life of coaching them and being with them and getting in the car every weekend to go to a game.

“I love being that dad,” Fisher says.

If he’s not at work, he’s typically with his family, Robin Fisher says. “Right now, we are raising three teenaged boys. Between his responsibilities at the bank and community involvement, that’s all we have time for.”

Early this week, she’d already had a full morning of shuttling the boys to soccer practice.

Robin Fisher met her husband at East Rowan when she was 15, and they dated for 11 years before they got married.

“We grew up together,” she says. “He’s always been fun, and definitely a leader. He has a knack of knowing who good people are. Mr. Paul set up a lot of that as well.”

Robin Fisher notes that Fisher has “an enormous about of respect for his father. Mr. Paul has a passion for the community, and Steve has that passion, too.”

Robin Fisher, too, says she loved their time in Atlanta.

“But I’m a homebody,” he says. “As you get older and a little bit wiser and have children, you gravitate back to home. It was a good opportunity, and we decided to take that leap.”

The Fisher boys have grown up around both sets of grandparents, Paul and Sue Fisher, and Big George and Rita Ennis.

“The value of grandparents in the lives of our children is immeasurable,” Fisher says.

As his family has grown, so has F&M. The bank, which employs some 150 people, has 11 branches through Rowan and Cabarrus counties, as well as the Financial Center in downtown Salisbury, the Trolley Barn and a lending office in Raleigh.

The Fishers have put together a senior management team that will serve the bank — formed in 1909 — well into its next 100 years.

Honeycutt and Fisher have been lifelong friends.

“He’s just a great person,” Honeycutt says. “He’s very much like his father, in that he’s very passionate about F&M and our business. He genuinely cares for our employees and people in general. I see a lot of Paul in him.”

Father and son worked well as a team.

“The transition could not have been any smoother,” Paul Fisher says. “Our team is also excellent. It was very easy for me to walk away, because I was leaving it in good hands. It’s just a great team of people.”

“We are keeping our same core beliefs,” Fisher says. “We are always seeking to balance convenience of banking through technology, but with service and stability.”