Here’s a promise Obama kept — but not as intended 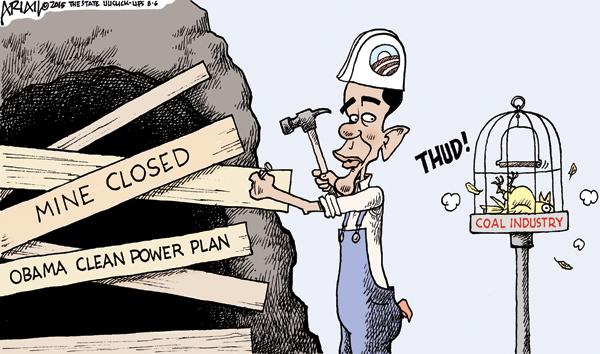 During the 2008 presidential campaign, Sen. Barack Obama said: “…if somebody wants to build a coal power plant, they can. It’s just that it will bankrupt them…” He added that under his now defeated Cap and Trade bill, “electricity rates would necessarily skyrocket.”

In 2010, Cap and Trade died in the Senate, but the president’s goal of bankrupting the coal industry never waned. Monday he announced that the Environmental Protection Agency will impose new regulations throughout the country limiting carbon emissions from power plants powered by fossil fuels. Several states are challenging the EPA rules “that aim to cut carbon emissions in the power sector by 32 percent.”

EPA Administrator Gina McCarthy, testifying before Congress, was asked about claims that the new EPA plan would only impact global warming by a measly .01 degrees Celsius, to which she replied, “…I’m not disagreeing that this action in and of itself will not make all the difference we need to address climate action, but if we don’t take action domestically, we will never get started…”

The Washington Post, which believes the Earth is warming and humans are responsible, acknowledged the regulations have “shortcomings,” but endorsed them because they set a good example for the rest of the world.

So, these regulations are likely to cost jobs, raise electricity prices and have a minimal effect on global temperatures, but they will set a good example? Is that the new policy standard?

Among many reasons Americans should be suspicious of this climate change push is that Administrator McCarthy has refused to release the “secret science” her agency used when drafting the new regulations. This “most transparent administration in U.S. history” has now added to the secret side deals with Iran, secret scientific “evidence,” which may not be evidence at all. Cults do that by suppressing any information and facts contrary to the imposed orthodoxy.

After the initial fusillade from critics, the president fired back, arguing that addressing “climate change” is a moral obligation and a matter of national security.

It would be helpful to know the president’s standard for determining what is moral and what is immoral, especially since he has said nothing about those Planned Parenthood videos in which high-level employees are shown explaining how the organization can abort babies in ways that preserve body parts. And there is ISIS, which continues to operate and appears not to have been “diminished and degraded,” as the president promised it would. Is ISIS not a bigger national security issue?

Instead of attacking coal plants and other users of fossil fuel that have produced electricity and elevated the American lifestyle, the president should have launched a campaign to deprive terrorists and Islamic fundamentalists of oil revenue. Instead of picking the controversial “climate change” horse to ride roughshod over Congress and a skeptical public, the president might have embraced an alternative fuel agenda that would have achieved his desired end without the crushing blows that almost certainly will impact states where fossil fuels have provided jobs that probably will evaporate,.

The EPA regulations are likely to reach the Supreme Court. In 2007, while the Court did grant authority to the EPA to regulate carbon emissions (Mass. v. EPA), it said it was not giving the agency an unrestricted license to do what it wants. It ruled that costs and outcomes must be taken into consideration as part of its regulatory mandates. The Court decision was one of two rebukes it has delivered to the EPA in the last two years for exceeding its statutory powers.

As the Court noted, “When an agency claims to discover in a long-extant statute an unheralded power to regulate a significant portion of the American economy, we typically greet its announcement with a measure of skepticism. We expect Congress to speak clearly if it wishes to assign to an agency decisions of vast economic and political significance.”

These are bound to be the issues should the EPA regulations again reach the Court, as they should.