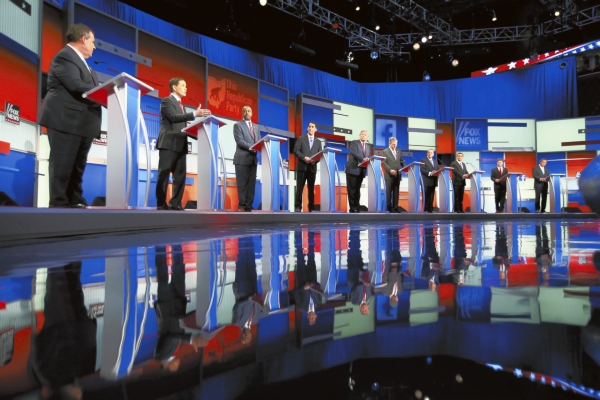 Who won? Who lost? Does it matter?

Republican presidential candidates on Thursday battled for the public’s vote in two of the first scheduled debates during the 2016 election season. The first debate included less popular candidates in polls. Thursday’s second debate was for those in the top 10.

With short periods of time allotted for answers, candidates squeezed in answers and a bit of banter between one another. Following the debates, however, it’s not immediately clear one winner emerged.

“I really liked her and thought she was an articulate, gifted and well-versed candidate,” Fisher said. “I hope she gets a chance to move to the top tier.”

“He put in the kind of performance that none of the other candidates seemed to match,” Bitzer said.

“It gave everyone the chance to see what the players and the teams looked like, to feel them out,” Kidd said.

The first question asked by moderators may have been the most important for Republican voters, according to Kidd.

Seconds after candidates were introduced during the main debate, moderators asked them to raise a hand if they might withhold support of the eventual nominee from the Republican Party and go on to run as a third-party candidate.

BusinessmanDonald Trump was the only one to raise his hand.

“In everybody’s mind, as Republicans, you want to believe that no matter who the party chooses, that these gentlemen and lady will support the one that ultimately wins,” Kidd said. “To see that one of those candidates was unwilling to commit to doing that, I think, stood out to everybody.”

Like most debates, candidates occasionally sparred with each other, resulting in heated exchanges.

Prior to the exchange, Christie was questioned about previous comments assigning blame to Paul — who’s taken up ending metadata collections as a primary issue — in the event of a terrorist attack. Christie upheld his stance, and Paul later intervened to clarify he’d only want to collect less phone data from “innocent Americans.”

The argument soon devolved into a discussion about Christie giving President Barack Obama a hug.

Christie fired back by saying Paul posts speeches online from the U.S. Senate chambers just to raise money for his campaign.

Kidd characterized testy statements and heated debate as candidates trying to differentiate themselves from the rest of the large field. Fisher said that passion is sometimes needed in candidates.

“One of the things that people forget is that politics is an advocacation of passion,” Fisher said.

Bitzer said those types of heated exchanges can be important and resonate with votes.

“It’s not just the substances, but also the stylistic approach that one takes,” he said. “Then again, it all depends on how aggressive one gets as to how effective it is.”

Initial parts of the debate may have been more about the showmanship, but talk soon delved into candidates’ stances.

When given the chance, all candidates expressed opposition to the Affordable Care Act.

Trump attempted to clarify his past support for a single-payer healthcare system, which involves government instead of private insurers paying for all health care costs. Trump said he’d prefer to see a private system without artificial lines. Paul, however, cut him off.

“News flash,” Paul said, interrupting Trump. “The Republican Party’s been fighting against a single-payer system for over a decade.”

Other substantive debate covered the war in Iraq, economics, education and immigration.

At one point, Trump claimed the Republican candidates wouldn’t be talking about immigration if it wasn’t for his campaign announcement, where he said Mexico was sending criminals to America.

U.S. Sen. Marco Rubio, R-Fla., claimed that the majority of people coming across the border are from Guatemala, El Salvador and Honduras rather than Mexico.

Bush, defending previous comments, said America needs to control its border. He said illegal immigration comes when people have no other option and need to provide for family members.

Wisconsin Gov. Scott Walker said he no longer supports a pathway to citizenship for illegal immigrants because he “actually listened to the American people.”

For months leading up to North Carolina’s primary election — currently expected to be held in March – polls will judge which candidates are doing the best among voters. The polls may not exactly reflect the final results of the 2016 Republican primaries, but they certainly mirror the amount of time candidates spoke during Thursday’s main debate.