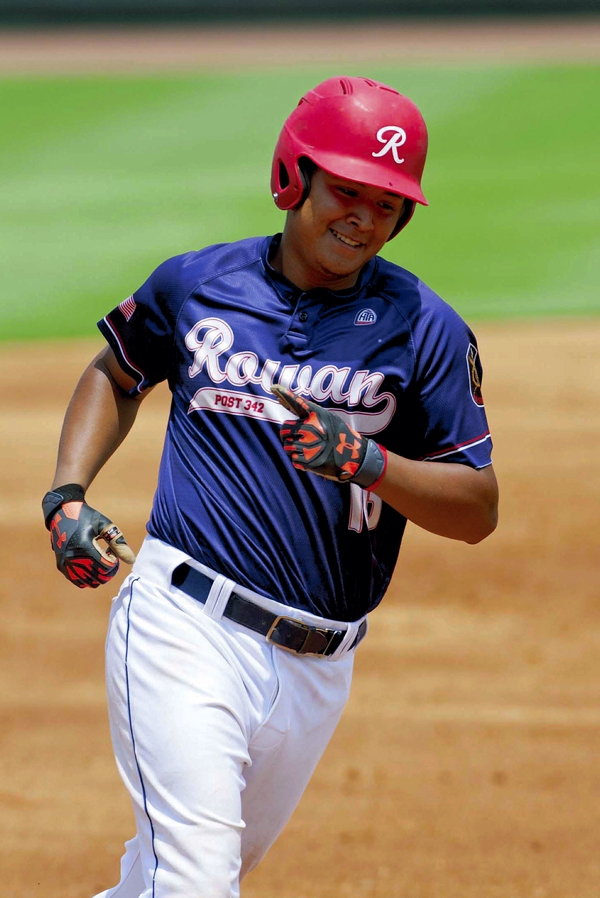 ASHEBORO — Rowan County found a way to stay alive on Friday afternoon, walking off at McCrary Park on a bases-loaded walk (on a 3-2 pitch) to patient No. 9 batter Lee Poteat.
“The best thing Poteat did was what he didn’t do,” quipped relieved Rowan coach Jim Gantt.
Down 2-0 early and 3-2 late, Rowan pulled out a 4-3 victory against Columbia, the Tennessee champions to survive and advance in the American Legion Southeast Regional Tournament.
It was a game played at a fast-break pace, with Rowan right-hander Riley Myers and Tennessee righty J.D. Davis filling up the strike zone, pitching to contact and mowing down hitters on routine grounders and fly balls.
“Guys were rushing through their at-bats like the batter’s box was on fire,” Gantt said. “Their pitcher was good. He knew what he was doing.”
Four base running blunders, including two pickoffs, helped put Rowan down by a run as the elimination contest sprinted into the bottom of the ninth inning.
Three outs from seeing a special season end, Rowan (32-7) sent Heath Mitchem to the plate to start the ninth. Rowan desperately needed a break and got one when Mitchem’s routine grounder to third base was bobbled. Mitchem, not the speediest of runners, beat the throw to first by an eyelash.
“That was the hardest I’ve ever run in my life,” Mitchem said.
He was running hard again five seconds later, stealing second to the amazement of everyone in the ballpark. The peg to second base beat Mitchem. Somehow he took evasive action and zig-zagged around the attempted tag.
“He never touched me,” Mitchem said cheerfully.
Juan Garcia comes through often and he delivered again with his team-leading 47th RBI of the season. He didn’t hit the ball hard on a 1-and-2 pitch, but he steered a ground ball through the right side, just past the diving second baseman. The ball was deflected, slowing it down. That helped Mitchem rumble home easily with the run that tied the game 3-3.
“All we needed there was a little hit,” Garcia said. “Just a lousy little single gets it done a lot of time. (Third base coach) Seth Graham reminded me not to try to do too much. Just get a hit, he told me, and that’s what I tried to do.”
Dustin Ritchie wanted to sacrifice Garcia to second but wound up flying out.
Then Hunter Shepherd slapped an opposite-field single to advance Garcia, carrying the winning run, to second base. After Kacey Otto struck out, Jeremy Simpson kept the inning going by taking the walk that loaded the bases.
Poteat was witnessing the decisive rally unfold like he was watching a movie on fast forward.
“Sitting in the dugout, I was feeling some nerves,” Poteat said with a smile. “But when I walked up to the plate I was able to stay calm. Well, at least I can say that now.”
The count went full. Then Poteat took the ball that forced in the winning run. He saw the pitch all the way. Everything inside him wanted to swing, but he didn’t.
“It was a fastball — up and out,” Poteat said. “It was a ball.”
Rowan was down, 2-0, going to the bottom of the third, but Mitchem’s two-run single — one of his patented bouncers through the left side — scored Harrison Baucom and Michael Caldwell and tied the game.
Willie Norwood’s RBI-single in the sixth was just out of a diving Otto’s reach in center field and gave Tennessee (32-11) a 3-2 lead, but Myers faced only 10 batters in the seventh, eighth and ninth, put three more zeroes on the scoreboard and gave Rowan a chance to rally on its final at-bat against Davis and reliever Ben Wright.
It wasn’t a pretty effort, but no one seemed to care. It’s all about survival at this point.
“For eight innings, I felt like cussing them,” Gantt said. “But then in the ninth, they showed patience and put a lot of pressure on their pitcher.”
Rowan County will play again at 4:30 today against host Randolph County. Shepherd is the most likely hurler, although Tyler Scruggs is a possibility.