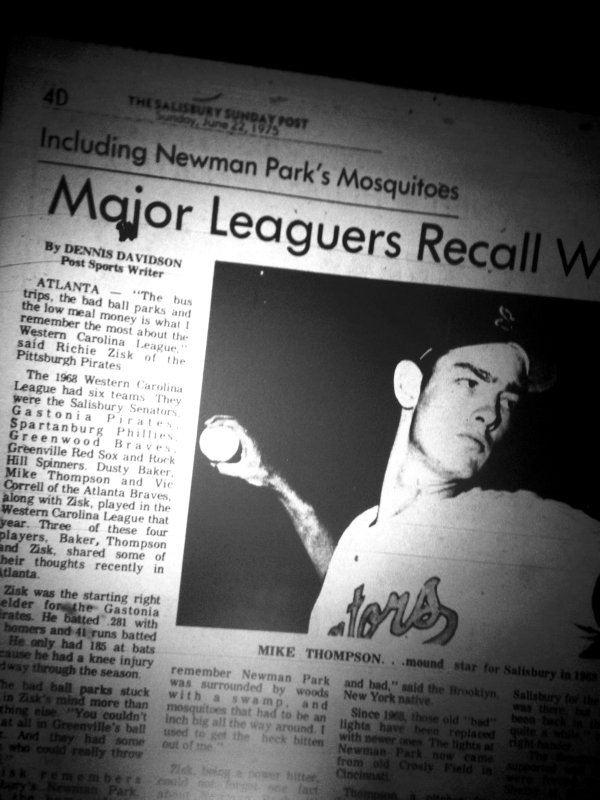 Image of an article written by new sports editor Dennis Davidson in 1975. Though he was just 16 at the time, Davidson went to Atlanta to interview major leaguers who had played at Newman Park during the 1960s.

Who’s that kid in the Atlanta press box?

I may have dreamed of being sports editor at The Salisbury Post but I can’t remember for sure. However, one my first experiences at the Post is etched vividly in my memory.

In June 1975, I was a 16-year-old rookie at sports writing — not even having earned the title of sportswriter yet. But there I was, sitting in the press box of the original Atlanta Stadium, now the parking lot for Turner Field.

To get there, I pulled a bold move that I’m not proud of, even though it had positive results. But I should have been more respectful of my boss, Post Sports Editor Horace Billings. I just couldn’t take “no” for an answer.

I had started working part-time for Horace in March of that year, so by the summer months, I thought that I was a big shot.

A family friend had planned to take a few young guys to Atlanta to see the Braves play the Pittsburgh Pirates on a Saturday night and Sunday afternoon. My brother, Todd, was a Pirates fan and the Braves were my team. I thought, as long as I was going, why not try to interview some players and write a story?

I knew that there needed to be a local connection, and I figured that one out. Salisbury had a Western Carolina League team during the 1960s and attending the Salisbury Senators’ home games in 1968 with my sister, Sharon, had really begun my love of baseball. The Senators played in Newman Park, sharing it with the American Legion team.

I checked the rosters and knew that several of the old WCL players had made their way up to the big leagues, more notably, the Braves and Pirates.

In fact, a Salisbury Senators alum, Mike Thompson, was now a Braves pitcher. And one of the Braves’ stars, Dusty Baker, had played for Greenwood and would have been a visiting player at Newman Park in the summer of ’68.

The Pirates had Al Oliver and Richie Zisk, both of whom had battled the local Senators for the Gastonia Pirates. So the stage was set to ask Horace if he could get me a press pass.

“No, you’re too young, you know it?” said Horace, in his patented delivery.

So … I shouldn’t have, but I looked up the Braves’ press director in a media guide at The Post (no Google back then) and gave him a call. My age never came up. I told him that I work at The Post and was going to be in Atlanta and he said, “just pick up your pass at Will Call … you’ll have to show an ID, but that’s all there is to it.” Then he hung up.

Will Call? What’s a Will Call? I remember excitement and fear at the same time, that I had actually pulled it off. But what would Horace say?

I confided in assistant sports editor Ed Dupree about it and, after he stopped laughing, he said something to the effect of to not worry about it. Just go and write a good story and Horace probably wouldn’t think anything about it.

So I did. Picked up the pass when we arrived on June 14, with my five-month-old driver’s license and off I went to the press box.  I remember keeping a low profile during the Saturday night game, but all the while, planning my attack for the next day. Thompson started on the mound in front of 29,308 fans on bat night, a huge crowd for the Braves back in the day. Perfect timing, even though Thompson was the tough-luck losing pitcher in a 2-1 Pirates win.

On Sunday, the first stop was the locker rooms for both teams.  “How cool is this,” I thought to myself, “I’m in a major league locker room!” Just a year earlier, I still had a dream to be a major leaguer myself until I saw the Braves and Cardinals, this time from the seats, and came to the realization that I was nowhere near good enough.

Thompson seemed surprised that I would ask about the Senators, as that season was now seven years in the books. Maybe it was my youthful appearance, but he seemed somewhat withdrawn about his Salisbury days. It was probably because he had lost the night before or that he was 7-13 on the mound that summer for Salisbury.

However, I hit the jackpot with Zisk and Baker, who glowed with stories about Newman Park, never questioning why a kid was interviewing them.  I’m sure they had no idea, as I’ve always looked older than my age. Baker even remembered a home run that he hit at Newman Park and running on the asphalt track (now a street), behind the fence.  Zisk mentioned being bitten by large mosquitoes.

I avoided Oliver, who had recently been benched and was not speaking to the media. A Pittsburgh beat writer was trying to get Oliver to talk and pitcher Dock Ellis starting yelling at the reporter. “Always trying to kick a man while he’s down!”

Ellis had a few more words, even louder, and I thought it best to take my teenage self on to the press box. The Braves lost a slugfest that afternoon, 8-6, before a slim crowd of 8,352. That shows the growth of MLB. No team currently would have a crowd that small on a Sunday afternoon.

I tell you this story because if you had asked me that day if I would ever be sports editor at The Post or anywhere else, I most likely would have said yes. I mean, here I was covering a Braves game at 16, so it only stands to reason, right?

No so fast, young man.

I left this newspaper in 1983 and started a career in college athletics that lasted nearly 30 years.

I never thought that I would be here but I am and I am thrilled and thankful for the opportunity.

Horace never held my daring move against me and I have to think that he maybe was impressed by my ingenuity. We became great friends and shared many Catawba games together, sometimes riding to away games side by side. It was a pleasure to help honor him on his 50th anniversary as Post sports editor in 1998 at a Catawba football game.

When I returned to work here as a copy editor last November, I found an old black-and-white 8×10 glossy of Horace in a nearby storage box. It has been on my desk ever since and will remain there. Horace Billings died in October 2013 at the age of 85.

I plan to work hard to live up to the standards set by Billings, Dupree, Mark Wineka, Steve Phillips, Ronnie Gallagher, and the two most recent sports editors — Ryan Bisesi and Adam Houston. Not to mention the current heart and soul of the sports staff, Mike London, a truly great writer.

Again, it’s a honor to be here, you know it?