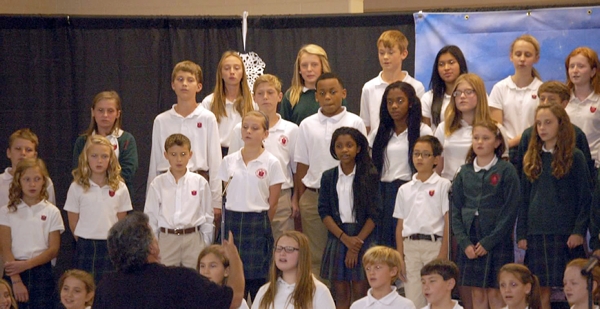 The educations of many Salisbury-area students are soon to take on an additional musical dimension, as Salisbury Academy opens a music conservatory for private music lessons at the start of the new school year.

Headed by Dr. Dwayne Robertson, known to students and staff as Dr. Rob, the conservatory will offer lessons in piano, beginning voice and saxophone. Lessons are open to both Salisbury Academy students and students from the larger community.

“Dr. Rob has an impressive set of career accomplishments, and a true gift for connecting and engaging musically with students,” said Beverly Fowler, head of school for Salisbury Academy. “We are honored to have him on board, and excited about the work he will do at Salisbury Academy’s music conservatory.”

A professional musician, performer, educator and author from the Statesville area, Robertson first came to Salisbury Academy in the 2014-2015 school year. Having retired in 2013 after a 30-year career as a school administrator and music specialist with Iredell-Statesville and Rowan-Salisbury school systems, Robertson found himself restless in retirement.

When Robertson learned of a position for a resident music specialist at Salisbury Academy, the next phase of his career began to unfold.

“I fell in love with Salisbury Academy from the beginning, as it had everything going for it: great leadership, respectful and bright students, and a human-centered culture filled with positive vibes,” he said.

School parents, too, were energized by Robertson’s programming. And as parents made requests from Robertson for private music lessons for their children, the plan for a music conservatory took shape.

“The music conservatory will make a powerful supplement to our school curricula,” said Fowler. “We look forward to seeing Salisbury Academy’s students and those of the larger community grow as musicians.”

Private music lessons will begin at the start of the new school year on Aug. 19 and will be held in the music cottage, an outbuilding on Salisbury Academy’s campus which serves as the school’s music facility. In addition to after-school private lessons, Robertson will offer lessons during school hours one or two days a week for college students, adults and home-schooled students.

Robertson stresses the importance of exposing children to music at an early age, as well as the need for a strong musical component in the holistic education of a child.

“If musical skills such as rhythm are not developed at a young age, these skills will never be fully realized in a student,” Robertson said.

Robertson has a number of accolades and accomplishments in his career, from performing piano concerts in venues such as the Biltmore House and the governor’s mansion to, most recently, winning first place in the performance arts category of Rowan County’s SliverArts competition.

Robertson looks eagerly upon his upcoming endeavors at the Salisbury Academy music conservatory. “As an ol’ piano player of yesterday, I find it very enriching that I still can have impact on the adults of tomorrow,” Robertson said.

Contact Robertson at rrobertson@salisburyacademy.org with inquiries on private lessons at the Salisbury Academy music conservatory.