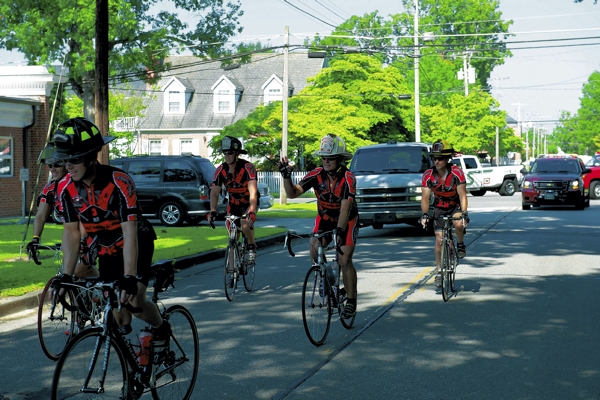 SALISBURY — Jay Baker, a battalion chief for the Salisbury Fire Department, has some hot, sticky, muscle-straining days ahead of him this week as he and his bicycle cover the 596-mile route encompassing the fourth annual Carolina Brotherhood Ride.

Baker left Burlington Monday morning with more than 25 other bicyclists made up of police officers, firefighters and first-responders. Their final destination is Charleston, S.C., Saturday.

Along the way, the Carolina Brotherhood riders have planned stops in Yadkinville, Marion, Monroe, Manning, S.C., and Myrtle Beach, S.C.

Carolina Brotherhood’s mission is to provide emotional and financial support for the families of police officers, firefighters, first-responders and forestry personnel who lost their lives in the line of duty in 2014. The ride aims to honor them and build awareness and appreciation of the sacrifice the individuals have made.

For Baker, who has been on each of the four Carolina Brotherhood Rides, it’s also a way to keep in his heart Justin Monroe and Vic Isler, the Salisbury firemen lost in a March 2008 fire at Salisbury Millwork.

Though the ride can be physically demanding, Baker said during a lunch break in Kernersville Monday that “it’s always about the mission, and for me it comes back to doing something for Justin and Vic.”

The riders have individual fund-raising goals on their way to raising a total of $20,000.

Their 83-mile route from Burlington to Yadkinville Monday was actually the easiest leg of the week’s ride.

The riders stay overnight in places such as fire departments, community centers and recreation centers. Baker judged about half of the participants are four-year veterans of the ride, as he is, while the others are “first-timers.”

The line-of-duty deaths being recognized by this year’s ride include the following men and a K-9:

Baker, 49, also serves as chief of the Spencer Fire Department. He said he stuck to his normal training routine to prepare himself for this year’s ride, which is supported by about 20 volunteers. Though he faces close to 600 miles, Baker thinks he will hold up well, “as long as we stay out of the mountains.”

A couple of other cyclists with local connections are riding with Baker. They include Bingham Hefner, a retired Charlotte fireman who now lives in Mooresville, and Ben Wooten, a former Rowan Countian who is now a fireman with Mebane Fire Department Engine Co. 37.

You can keep up with the cyclists progress on social media and on the group’s website at carolina brotherhood.com. Baker still is accepting donations on the website at http://participants.carolinabrotherhood.com/sponsor-a-rider/user/9/

Is something big in the works for Granite Quarry?