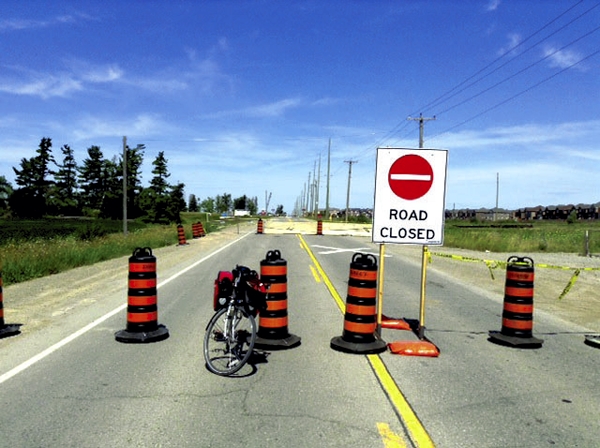 The signs and barrels said "Road Closed" as David Freeze was coming into Mississauga. He rode straight through this one, he just had to move a barrier or two.

I will start with a few more tidbits about my room from Saturday night. First thing, I was very lucky to have it because hardly a room has been available along my trip today. Not that I needed one this time, but the availability sure is thin. There are not a lot of motels anyway because the population is scarce until you get near the bigger towns.

There were a few rules given to me last night that will be memorable. The most important one was “Don’t do anything in the bathroom.” I couldn’t anyway because the door to that part of the apartment was locked. The next rule was “Don’t adjust the controls on anything.” And also, “Don’t leave anything.” The owners of the motel had rented me the front room of someone’s leased apartment who just happened to be out of town. I followed all the rules and will be eternally grateful to them for helping me out.

The same scenario won’t be the case tonight, Here is how today has developed so far. I started out this morning on Route 10 headed back toward Orangeville on the same road that I had used in late July. Then, after a stop at my favorite McDonald’s with the fireplace, I headed on through Victoria and toward Mississauga on Mississauga Road. To start with, it was a beautiful rural road with lots of farms. Then I started passing many more of the housing developments where the houses all look the same and are jammed in close together. Then the traffic started to pick up as I neared the city, though the cars always allowed me plenty of room. Soon I was in the big Canadian city of Mississauga, right next door to Toronto.

I am staying tonight with Andrew Ross, the cyclist who offered me a room if I needed one when we saw each other back in Burlington, Ontario. Andrew is registered on Warm Showers, a service for long-distance cyclists who may need a room when passing through. These hosts are all over the world and offer a way to take some of the mental strain out of a long trip. In fact, I am going to check in on doing the same thing myself.

Here are a few things that I have seen and not yet mentioned. Nearly everywhere in Canada, bathrooms are called washrooms. Old names for us like Rexall and Esso are still very popular here as well. I stopped last night to get some food before heading for the motel and made one of my visits to the local grocery store in Shelburne. I took my yogurt and fruit to the counter and was told that I could not use my Visa debit card. The clerk said that Visa takes 10 percent of all purchases in Canada, which may explain why the stores always ask if my card is Visa.

Then I went over to Tim Horton’s, the very popular Canadian restaurant chain, and was told that they don’t carry fries, only a thicker potato chip. The store person said they never have carried fries, which came as a big surprise to me. Also, just today, I found Diet Mountain Dew and peanut butter crackers in a convenience store, but it carried only very small amounts of both.

Tonight, I will be able to get a shower and clean up. But I will also have time to reflect on the end of this trip. I will ride into Toronto tomorrow morning on a very scenic route along the water. In fact, I am sitting beside Lake Ontario now as I write this. I have seen parts of Lakes Erie, Huron and Ontario, and am amazed every time.

A storm is building from the west and there is a chance of rain tomorrow as well. No matter, nothing will dim my delight at having traveled this route by bike for 34 days and close to 2,300 miles. I will share more about this tomorrow and Tuesday.

My ride today was a fun 57 miles, and tomorrow’s ride will be much shorter. I will visit another big city when I enter Toronto, but Andrew has told me that motorists expect to see bikes. Then I will be parking the bike and getting it ready to ship home. There will be some pictures of Toronto sites too, especially after my daughter Amber gets here around midday.
So with that, I will close for today and see you again tomorrow.