Saleeby-Fisher Y lifeguards ‘Shut Up and Dance’ for video contest 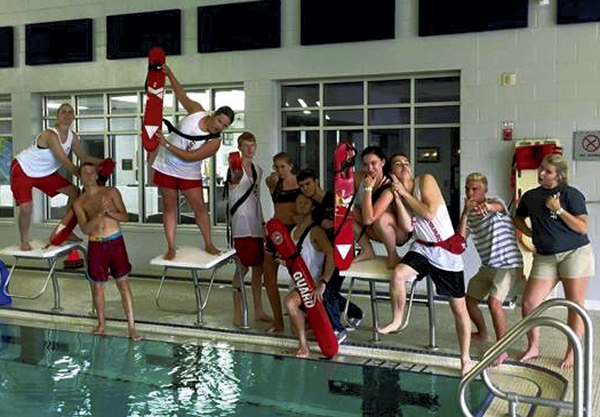 A group of lifeguards from the Saleeby-Fisher YMCA in Rockwell clown around for a video they created for the Good Morning America "Shut Up and Dance" contest. The group did not win, but had fun creating the video. Submitted photo

ROCKWELL — It’s not rude to tell someone to shut up and dance — well, only if it’s the name of a popular dance song and the theme of a video contest. A group of lifeguards from the Saleeby-Fisher YMCA paired the “Shut Up and Dance” song with a short video for the Good Morning America show.

The local lifeguards did not win the contest, but say they were proud to participate. The winner of the contest will win $10,000 for their organization.

The contest — the Lifeguard Surf & Turf Showdown — was open to lifeguards across America who could try their best at lip-synching to the featured song. The song, which has an 1980s instrumental beat, is by alternative rock band Walk the Moon. The song is an anthem for letting go of frustrations and having fun.

The video had to be one minute and feature actual lifeguards from the organization. The submissions also required a 200-word essay about the organization and how it planned to use the money. The YMCA planned to spend the $10,000, if its team won, on providing scholarships so that people in the community could learn to swim at no cost, and the money would’ve benefited the organization’s Pop Basinger Road community garden.

The submitted videos were narrowed down to the top five. Good Morning America viewers will choose the winner.

The Saleeby-Fisher branch spent two hours after work coming up with a video concept and just about the same amount of time filming the video. The video begins with lifeguard Kaleb Robinson, 18, telling fellow lifeguard, Wyatt Zander, 18, he can go on break.

While on break in the locker room Zander has a dream he’s saving a drowning victim’s life. The “victim” is none other than fellow lifeguard Katlyn Smith, 19, who then breaks out into dance. The video cuts to lifeguard Carmen Lowe, 21, who can’t help but dance. Zander awakens after his “crazy” dream.

The lifeguards learned about the video contest from Chief Operating Officer Amanda Hesse, who saw a promotion for it while on vacation. She brought the news to her staff, which includes Bridget Dexter, the aquatics director and associate executive director.

During a staff meeting, Dexter told the lifeguards about a “cool project” they had in mind. The lifeguards and staff loved the idea, and they began planning and brainstorming immediately. Although the only four lifeguards are shown, about 20 people helped with the video, including the day camp staff.

“It was a group effort,” Zander said.

There was lots more footage, Lowe said, but the video had to be cut for the contest. Sports Director Joe Finney, who also owns Tre-J Media, a videography and film production company, edited the video. The video began with 80 clips that were reduced to 15, Finney said.

One of the scenes that had to be edited for brevity showed a group of teens fighting near the pool, and someone falls in. There was also a synchronized swimming routine.

Zander said the larger video clip where Lowe is dancing actually shows her blocking the way, making it harder to save Smith’s life. Zander wasn’t even originally supposed to be in the video, but by a stroke of luck he was the only person who had a pair of earbuds handy. He became the main subject of the video.

The group had one week to create, film and edit the video. GMA producers scaled the contest entries down to five, and the local group believes they were in the running to be one of those five. They received emails and phone calls from producers who wanted to obtain more details about the staff, including who from would fly to the morning show if the group were chosen.

Robinson said they took the video very seriously. They even trained for it.

Lowe said the lifeguards underwent 30 minutes of skills practice where they worked on rescue techniques and other routine lifeguard training.

“We tried to do crazy kind of stuff,” Lowe said.

“We had a lot of fun. We may not have gotten into the finals, but we had substance,” Lowe said.

“It was fun and interesting. We were excited for New York,” Smith said.

Robinson said the video created a lot of buzz in the community. The group promoted the video on the organization’s Facebook page and other social media pages.

The YMCA video on Youtube had been viewed 700 times. To watch the video, go to https://www.youtube.com/watch?v=YO7dVdpBR2s or view below.

Undaunted by their standing in the contest, the group is on to its next opportunity. They’ve planned to enter another contest sponsored by Microsoft. The “Upgrade Your World” contest is open to nonprofits. The organization that garners the most votes will receive a $500,000 donation, plus technology and support from Microsoft.

They have until Aug. 23 to gain votes via social media platforms Facebook, Twitter and Instagram. Voters must tag the organization and use the hashtags #UpgradeYourWorld and #Vote to make the votes count. Voting can only take place once a day on those social media channels.

Voters can also include text, photographs, video, voice or other media that describes how the voter or the charity they are choosing upgrades the world in big and small ways, according to Microsoft. Essentially, voters can tell Microsoft about why their particular organization is special.

Visit www.windows.com/upgradeyourworld for more details about this contest.