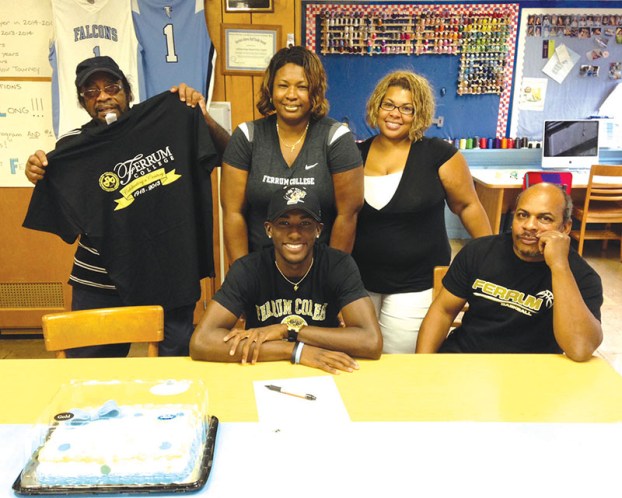 MOUNT ULLA — Celexus Long’s white and Columbia blue No. 1 basketball jerseys hung on the wall and a chalkboard listed his lengthy parade of accolades, including 2014 Sam Moir Christmas Classic MVP.
Teammates, friends and family offered hugs and smiles, and emotional West Rowan coach Mike Gurley said his goodbyes and thank-yous to a three-time All-Rowan County Player.
There was doubt deep into the summer as far as Long continuing his hoops career, but he’ll start college this fall at Ferrum, a 1,500-student Division III school in Virginia. The school is 70 miles north of Greensboro and 35 miles from Roanoke.
While he’s slightly built at 5-foot-9, 140 pounds, Long is quick and has an accurate 3-point shot. He could be an immediate contributor for the Ferrum Panthers.
“Better late than never,” Gurley said. “Less than 3 percent of high school players go on to college basketball, so we feel good about Celexus getting an opportunity. That’s two for us this year.”
Long’s high school classmate Greg Joseph will be playing for North Carolina Wesleyan, one of Ferrum’s rivals in the USA South Conference.
The hard decision for Long was whether to go to Ferrum and keep basketball in his life or to enroll at Campbell or East Carolina as a regular student.
“Ferrum is a chance for me to keep doing what I love most,” Long said. “And I’m still going to be able to what I want to do as far as a career. My goal is to be a physician assistant. I’m going to double major at Ferrum in nursing and health sciences.”
Long is still a modest, yes-sir youngster even after scoring in double figures 51 times for the Falcons. He topped 20 points 13 times in his prep career, including a 30-point outburst against Hickory Ridge during his junior season.
It was another game against Hickory Ridge as a senior that impressed Ferrum head coach Bill Tharp, who was on hand in Mount Ulla to watch the Falcons beat the Ragin’ Bulls 72-70.
“I was told before the game the Ferrum coach was there to see me,” Long said. “But that didn’t affect me. I didn’t try to show out. I just played my game. We won a tough game, and I shot 7-for-8. It was kind of a silent 20-point night.”
Gurley remembers it.
“Ferrum’s coach told me it was the quietest 20-point night he’d ever seen,” Gurley said. “He was impressed.”
Gurley also remembers the last game Keshun Sherrill played for West Rowan in 2012 (a loss to Concord) and how he spoke to Long, a freshman, after he came off the court.
“He kind of passed the torch to Celexus and told him it was his turn,” Gurley said. “Celexus became a heckuva ballplayer.”
Long averaged double figures three straight seasons and is No. 14 on West Rowan’s career scoring list with 990 points. He would’ve gotten 1,000 routinely, but he missed a game as a senior with an injury, and then the South Piedmont Conference Tournament was wiped out by weather.
“There were a couple of games where I was sick and couldn’t play the way I wanted to,” Long said. “But what really hurt was not getting to play the tournament. That kind of drained something out of the whole team.”
In the record book, Long fell 10 points shy of 1,000, but Gurley has placed an asterisk next to Long’s 990.
“I’ll never forget the night we were floundering at East Rowan, and then Celexus scores nine points in a minute,” Gurley said. “In my heart, Celexus was a 1,000-point guy.”