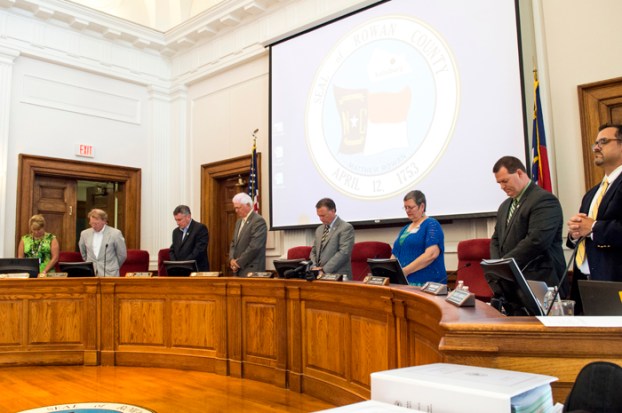 A matter of faith & law

Who should give the invocation or prayer at public meetings? Board members? A chaplain? Anyone?

Does the government restrict what can be said in those prayers?

Do the guidelines that apply to Congress apply to all public bodies, from the nation’s capital down to the local tree board?

These and other questions may be answered as the Rowan County Board of Commissioners appeals U.S. District Court Judge James Beaty’s ruling against the county. Beaty ruled in May that Rowan commissioners created a “coercive environment” and violated the Establishment Clause of the Constitution by consistently opening their meetings with Christian prayers. Commissioners don’t accept that ruling.

Three local citizens, with the help of the ACLU, filed suit against the county over the prayer issue in 2013. The hubbub that followed was impassioned. In revival-like fashion, people filled the commissioners’ meeting room, the hallways outside and even the sidewalks to urge commissioners to stand up for prayer — to stand up for Christianity. Comments from some of the demonstrators seemed to bear out the plaintiffs’ concerns that commissioners’ meetings had become an unwelcoming environment for anyone who didn’t share board members’ Christian beliefs.

This year, the rhetoric has toned down, but the central issue is the same — the tension between commissioners’ freedom to speak and pray how they want, vs. constituents’ freedom from government-imposed religion. Courts have ruled on several versions of the public-prayer issue, but none of those cases were exactly like Rowan’s. Once commissioners decided to fight the original lawsuit, they were virtually committed to fight any lower court ruling that didn’t go their way. The county’s position had been staked out.

So the appeal has been filed. Public boards everywhere will follow this case, since so many hold invocations of some kind. To some, it’s a meaningless formality. To others, it’s a matter of faith.

Editorial: Progress in the West End

They can’t declare mission accomplished; fighting crime is a constant job. But Salisbury Police can take satisfaction in knowing that... read more