The Life of Riley: When Carl Hubbell was king 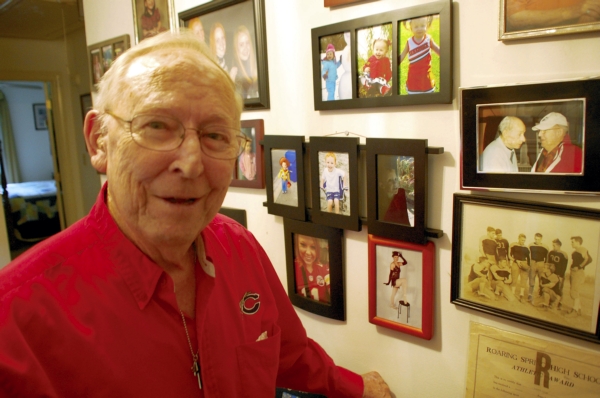 Mark Wineka/Salisbury Post Joe Riley stands among some family photographs in the hallway of his Salisbury home.

SALISBURY — Anyone who knows 91-year-old Joe Riley recognizes the man as a storyteller, and a pretty good one.

We spent  some time together the other day because Riley wanted to talk baseball and share his childhood memories of two New York Giants greats, Hall-of-Famers Carl Hubbell and Bill Terry. Riley roped me in when he mentioned the word “baseball.”

Riley’s father had been born and raised in New York City, when the teams were the Yankees, Giants and Brooklyn Dodgers. His dad, a Giants fan, ended up married and living in Syracuse, where Joe was born. When Joe was 3, the family moved to Newton Falls, a paper mill village of less than 1,000 people not terribly far from the St. Lawrence River and the Canadian border.

Nearby Canton, N.Y,, was and still is home of St. Lawrence University, and it was there a family friend named Leo— Aunt Gladys’ brother — took Joe to see one of the Giants’ last preseason games before the start of the 1931 campaign. The Giants played the St. Lawrence college team

The big thrill for Riley, who would have been 7 at the time, was to see Giants first baseman Bill Terry in person. He had been the National League Most Valuable Player in 1930, when he batted .401 with 254 hits in 154 games.

“We saw him in person,” Riley still says with a tinge of awe.

As Riley remembers it, the Giants were killing the college kids that day and somehow he and some other boys made it to a place, possibly the locker room, where they hoped to meet Terry and get his autograph.

When Terry came walking in, one of the boys ran up expecting him to sign something. Riley repeated the words Terry said next in a booming voice, the way Terry delivered them.

“Get away from me, kid,” the player said.

Little Joe Riley stowed away any dreams he might have had about talking with Bill Terry.

It should be noted that Terry was the last National League player to hit .400, and his 254 hits in 1930 is still tied with Lefty O’Doul for the most hits in a National League season.

Terry would go on to be a player-manager for the Giants, then just the team’s manager. Under his direction, the club won the World Series title in 1933. That’s little solace for Riley, who can only think of the brushoff Terry delivered in 1931.

“Bill Terry apparently was a royal pain in the ass,” Riley said.

Riley was a bit older when he saw Hubbell pitch a game. It was during his senior year in high school. In the seventh grade, his family moved to another paper mill town — this one in Roaring Spring, Pa., near Altoona.

For a senior trip, Riley’s class elected to travel to New York City, which was great with Riley, because he met an uncle in the city, and they went to the Polo Grounds, home field for the Giants. Hubbell was pitching that day, but it was his hit in the eighth inning that led the Giants to a 2-1 win.

“That was one of the great moments in my life,” Riley said.

Hubbell was a big deal. Baseball historians always mention his performance in the 1934 All-Star game when he struck out five future Hall-of-Famers in a row, including Babe Ruth, Lou Gehrig and Jimmie Foxx.

Hubbell, dubbed by sportswriters and fellow players as “King Carl” or “Meal Ticket,” was known especially for his screwball. Riley says the southpaw threw it so much during his career it permanently deformed that arm.

I’ll have to take his word on that.

Hubbell pitched in three different World Series, was the National League Most Valuable Player twice and an All-Star nine times.

Riley downplays any talent he had for baseball as a kid. In Newton Falls, the family house was on Overlook Avenue, in an area known as Gobbler’s Knob. On their property was just enough room to have a small baseball diamond, Riley said.

Maybe the real baseball talent in his family belonged to his older brother, Riley said.

“He was a show unto himself,” he added.

The brother played third base and could stop, with his chest or glove, anything hit his way. “The real show,” Joe says, “was when he threw to first base. He had an arm like a Howitzer. He had a gun that was completely unreal — and completely unreliable.”

In high school, Riley starred mostly in football and track. As a high school senior, he remembers, Riley ran the 440 in 51.3 seconds at a district track meet in Altoona.

“I could have been possibly Olympic material,” Riley said, figuring he would have gotten even faster as he matured. “I could run like hell.”

In years past, I’ve recounted how Joe Riley came to Catawba College in 1941, left for his stint with the 344th Bomber Group in World War II and returned to Salisbury and graduated from Catawba after the war.

He went into banking here, working for Wachovia for 23 years and Northwestern for 14 before retiring in 1984. Along the way, Riley became an American Legion baseball fan, though he can’t make the games any longer.

During the Rowan County American Legion team’s run to the World Series in 1955, Riley recalls listening to the games on radio in his boss’ backyard. He also was a fan of the old Salisbury Rocots town team.

Riley and I talked about many other things in our recent visit. When he started out in banking, he was an adjuster — basically a guy sent out to collect from people not keeping up with their loan payments. On two different occasions, guys pulled knives on him, but he wasn’t hurt.

Riley golfed a lot, from his college days into his 80s. “You are in the presence of the worst putter who ever played the game of golf,” Riley said, describing how he never lined up a putt correctly.

I didn’t mention this to Riley, but I was in the presence of Carl Hubbell as a kid, too. My dad pointed him out to me while we were attending a minor league game in York, Pa.

York had a Double A team then, and Hubbell apparently was looking at some prospects in his role as the Giants’ director of player development. I remember being surprised at how impressed my dad was of Hubbell and even more surprised when he walked down to his box seat and said hello.

As I remember the white-haired Hubbell was gracious and humble, nothing like that pain-in-the-rump Bill Terry.