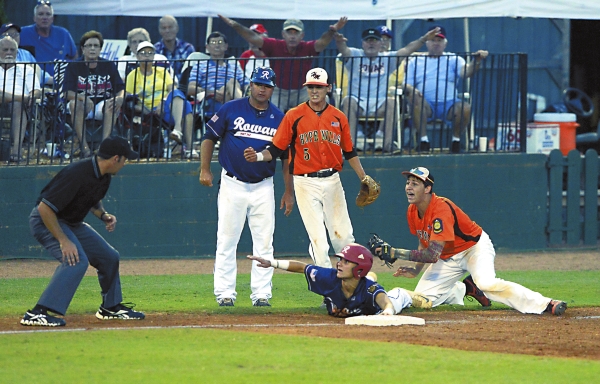 Despite the pleas of Rowan County fans and baserunner Michael Caldwell, the umpire makes the out call after Caldwell was tagged in a 2015 American Legion ball game. Wayne Hinshaw/For the Salisbury Post

Rowan only unbeaten team after rallying past Hope Mills

SALISBURY — Hope Mills sent 46 batters to the plate, pounded out 19 hits — and lost.

It was arena baseball at Newman Park late Sunday night where Hope Mills dropped a 12-8 decision to a Rowan County squad spurred on by a huge, excitable crowd.
“I’m proud of my guys,” exhausted Hope Mills coach Mark Kahlenberg said. “That was a back-and-forth battle between two really good baseball teams. We were a hit away and a break away from winning it.”
The victory put Rowan County in prime position to win the state tournament for the first time since 2009, although the double-elimination affair is a long way from over. Hope Mills returns to action in an elimination game on Monday at 1 p.m. against High Point, while Rowan plays Caldwell County at 7 p.m.
“That was a roller coaster, a heckuva battle,” Rowan’s Riley Myers said. “I was up and down all night. I hit a home run. Then I struck out three times. Then I ended up closing it out. It was crazy out there, but I feel like the best team prevailed. I still feel like we’ve got the best team.”
Rowan County (28-6) trailed, 8-6, going to the eighth inning but scored six unanswered runs, as relievers Heath Mitchem and Myers shut out Hope Mills (22-6) during the final two innings.
Rowan starting pitcher Hunter Shepherd lasted into the seventh inning, despite a stream of sharply struck singles by Hope Mills. Shepherd’s outing included escaping a jam in the sixth with two strikeouts and a popup to strand Hope Mills runners at second and third bases.
Rowan coach Jim Gantt also pointed at the job Rowan reliever and winner John Owen did in the seventh inning when Rowan had two defensive misplays.
“He kept his cool and made some good pitches,” Gantt said. “They scored four runs in the seventh, but if he lets them put up a six-spot there, well, it’s probably over.”
Down 8-6, Rowan put together a three-run eighth inning that finally swung the see-saw game for good. An RBI-single by Kacey Otto pulled Rowan within 8-7 and walks to Harrison Baucom and Michael Caldwell filled the bases. When Juan Garcia rapped a ground ball to second, it appeared Hope Mills might turn an inning-ending and lead-preserving double play, but the relay to first got away. Otto scored the tying run and Baucom steamed home from second base with the go-ahead run on a bang-bang play.
“I just ran with no let-up and (third base coach) Seth Graham was sending me,” Baucom said. “That was a big run, but every run was big. We were lucky to come out on top in the most emotional game I’ve ever played in.”
The bottom of the eighth contained a season’s worth of suspense with Mitchem on the mound. It began with a single by Trey Jacobs and a walk to Logan Hales. Then Trey Davis bunted. Mitchem calmly bounced off the mound and got a huge force out at third base on a close play.
“If that bunt’s a little more toward the line, we’ve got bases loaded, no outs,” Kahlenberg said.
Mitchem acted as if the fielding gem was no big deal.
“We work on that play so much in practice, I thought it was just routine,” he said. “But then, when I got back to the dugout, everyone was telling me what a good play it was.”
The next play was even bigger. A hard bouncer right at Myers at third base. He stepped on the bag and fired across the diamond to first baseman Juan Garcia for a rally-killing double play.
Rowan got breathing room in the ninth when No. 9 hitter Lee Poteat delivered a clutch two-run triple with two men out. That was the backbreaker.
Mitchem and Otto had three hits each for Rowan.
“But Hope Mills had one of the better staffs we’ve faced,” Mitchem said. “All three pitchers they used were good.”
Justin Huggins had four hits for Hope Mills, while Garrett Johnson had three, including two doubles.
Hope Mills starter Gatlin Pate pitched into the seventh inning. Austin Warren, who began the game at shortstop, took the loss.
“I honestly don’t know how we won,” Gantt said. “We played against a good team that competed like crazy. Fortunately, we competed hard too — and the crowd really helped us.”

SALISBURY — With two on and no outs in the fourth inning, Wilson’s Luke Taylor rapped a ball up the... read more