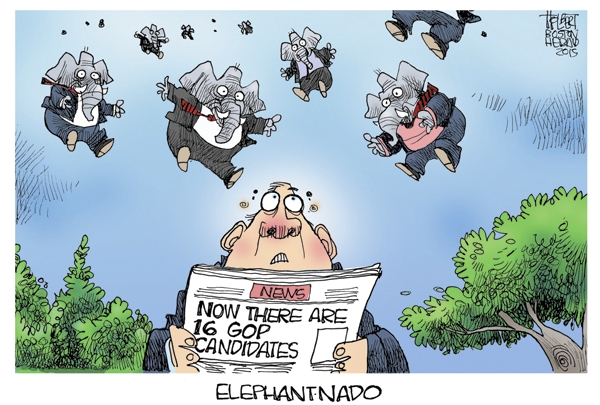 RALEIGH — After months of debate, North Carolina seems finally to have set a date for its 2016 presidential primaries. It won’t be in February, right after the South Carolina primary, as originally scheduled. It won’t even be during the first week of March, when more than a dozen states will hold primaries or caucuses.

Instead, the General Assembly is poised to set the primary for March 15. Why? Because state legislators have decided not to blow North Carolina’s role in the presidential race out of proportion.

Yes, that’s a pun. Lawmakers still hope to make our state relevant to the presidential field, and more particularly to the seemingly endless parade of officeholders and wannabes running for the Republican nomination. But after looking more carefully at the primary calendar and considering the effects of Republican National Committee rules, they’ve decided that joining Florida, Illinois, Ohio, and Missouri for a March 15 contest is North Carolina’s best play.

States like North Carolina that had sought to leapfrog their way into the February calendar were credibly threatened with the loss of most of their convention delegates, as well as candidate refusals to buck their national party by campaigning vigorously in miscreant states.

Once North Carolina leaders realized that a February date wasn’t feasible, they could have joined nearly a dozen states planning to hold a “Super Tuesday” on March 1. But this set of contests, commonly referred to as the “SEC Primary” because most of them are in Southern states, will still be constrained by national party rules that require delegates to be allocated on a proportional basis. States can’t hold winner-take-all primaries until mid-March.

While these matters will probably be moot with regard to the Demo-Clintonic Party, the GOP field is so large — and so full of candidates with attached super PACs to keep them afloat even if hard-money donations fall short — that proportional allocation of the February and early March contests might not prove decisive. There could well be four or even five major candidates truly still in contention by March 15.

If so, a delegate-rich state holding a winner-take-all primary on March 15 could end up with more real influence over the nomination than a state holding an earlier contest. Of the five states now tentatively slated for March 15, only Illinois is planning to use proportional allocation.

Imagine a scenario in which Jeb Bush, Marco Rubio, Scott Walker and Rand Paul have all snagged significant delegate counts during February and early March. (I’m assuming Donald Trump, currently playing the role of Bozo the Clown, will be a non-factor by then. If I’m wrong, it probably means GOP voters have decided to let Hillary Clinton sleepwalk into the White House.) North Carolina, Ohio, Florida, and Missouri would then loom large. Awarding all the Florida delegates to either Bush or Rubio (presumably) might well have the effect of knocking the other out. All candidates would fight tooth and nail for the other three.

These four states wouldn’t just be huge caches of winner-take-all delegates. Florida, Ohio, and North Carolina are clearly battleground states for the fall campaign, with Missouri leaning Republican but not by all that much. A GOP candidate thinking about the general election will have an extra incentive to invest time and resources in the March 15 states.

By initially trying to put the primary in February, North Carolina Republicans played a game of chicken with the national party. The RNC didn’t blink.

Now, wisely, state leaders have come up with a better plan, one that makes the North Carolina primary potentially important without incurring costly penalties.

The downside? We’ll have to put up with presidential candidates traipsing through our state. I suppose it’s for a good cause.