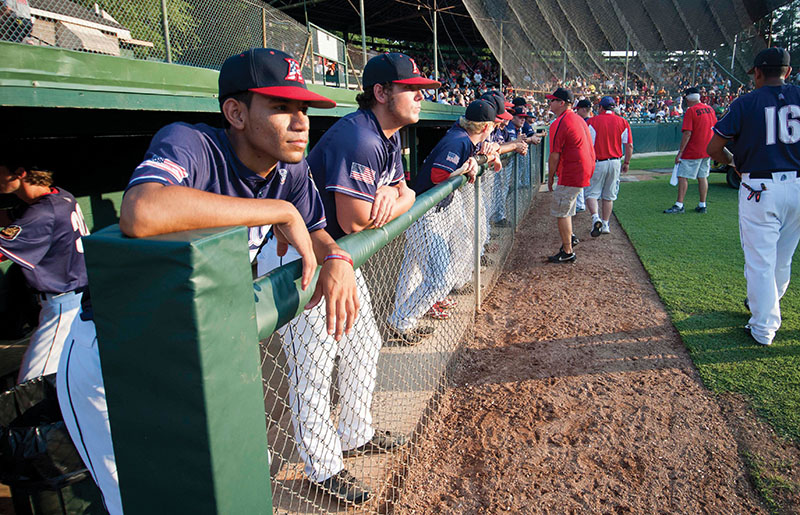 SALISBURY — Right from the start, pitching was a chore for Rowan County’s Omar Bautista.

The easy-going right-hander with the gentle smile realized as much Friday when his initial delivery was laced for a double down the left-field line, the first of four two-baggers he yielded to Wilson Post 13 at Newman Park.

“Nothing was easy,” Bautista admitted after Rowan prevailed it’s state tournament opener. “But then, I knew this was going to be a tough matchup. I tried to work with confidence and do my best. But yeah, it was a tough night.”

It was, perhaps, more arduous than it had to be. Bautista was not himself on the mound, though he persevered through 5 1/3 innings — working his way into and out of trouble in each dehydrating inning. His fastball was in the cool zone and meandered at times. His curve had only cement-truck spin. Yet there he was in the post-game winner’s circle, celebrating his fifth victory of the season.

“He competed, he bowed up,” said catcher Dustin Ritchie. “All those baserunners, that didn’t get to him. He was a bulldog out there.”

He had to be. Bautista leads a Rowan pitching staff that has optimism and assuredness coursing through its veins. He’s an ace on a team with three legitimate aces. And last night, for whatever reason, he looked downright ordinary.

“He puts pressure on himself, if that makes any sense,” Rowan pitching coach Sandy Moore said after Bautista’s 90-pitch adventure. “But he doesn’t get rattled.”

The large, boisterous crowd served as front-row witnesses. They watched Bautista escape the first inning unscathed by inducing a groundout and fanning Wilson’s No. 3 and cleanup hitters. In the second the Area I co-champions put two runners aboard before Juan Garcia an inning-ending double play. In the third, when he issued the first of four walks following a misplayed single to left, he was pure teflon, sliding out of another mess.

But without doubt, Bautista’s greatest escape act came in the Wilson fourth.  Rowan was nursing a 7-0 lead when he suddenly lost sight of the plate. His pitches were all over the shop — up-and-in, high-and-outside, low-and-away — as he walked Nick Sanders and Jake Taylor on a total of nine pitches to open the inning.

“I just lost the strike zone for a little bit,” Bautista said afterward. “I was probably thinking too much. Then I looked up and there was Ritchie, telling me settle down, get a strike and keep pitching.”

Ritchie said Bautista lost some of his command, possibly due to the tropical playing conditions. “I figured he was getting a little tired,” he explained. “Maybe he was sweating too much and couldn’t get a grip on the ball.”

This time Bautista’s defense bailed him out. Wilson’s Luke Taylor smashed a none-out ground ball that seemed destined for the center-field lawn, only to be foiled by Rowan second-baseman Michael Caldwell, who dove to his right and started a 4-6-3 double play.

“That ball went past me like lightning,” Bautista said. “As soon as I turned I saw (Caldwell) dive and make what I’d call a major-league play. Right then I knew I had to bear down and keep pitching.”

Ritchie, for his part, missed the excitement. “Omar blocked my view,” he said. “I’m probably the only person here who didn’t see that play.”

Bautista ran into double trouble in the top of the fifth when Wilson plated its two runs. Post 13 was threatening to score more when Bautista snagged a foul pop-up in front of the Rowan dugout. “Usually the catcher or first-baseman would take charge on that ball,” he said. “But no one did so I went after it. Then I thought it might be a mistake because I was using a brand new glove tonight and it wasn’t really broken in.”

It was after he squeezed the ball for the second out. “There was something about that glove,” Ritchie said. “Warming up in the bullpen I kept throwing the ball back to him and he kept dropping it, right off the palm. I called it ‘New-Glove Syndrome.’ He did his part. We made the plays behind him. He’s not the Player of the Year for no reason.”

He was, even if he wasn’t himself.