David Freeze: A spectacular ride to the Empire State 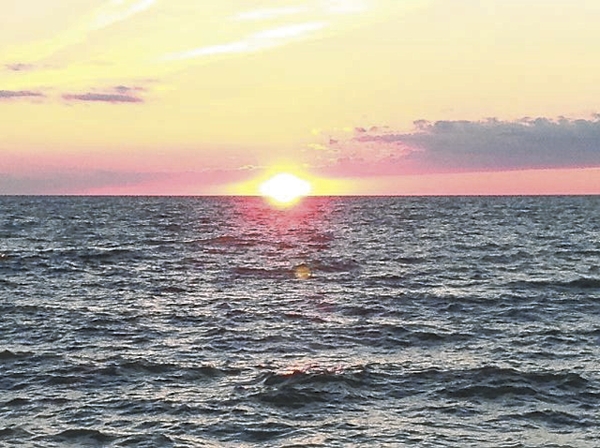 david freeze/for the salisbury post The sun sets over Lake Erie, as seen from Presque State Park in Erie, Pennsylvania. More views of the water came the next day.

When I left you last evening, I went out to Presque Isle State Park to capture a sunset on Lake Erie. I love sunsets anyway, and those that dip in the water are to be cherished in my opinion. It was chilly and very windy last evening when I got out there, but the sunset was spectacular, just as I knew it would be.

I left the Riviera Motel this morning in Erie, Pennsylvania, and headed back out to the park. My goal was to ride out at least far enough to see the Presque Isle lighthouse. Lighthouses fascinate me, too, especially those that have such great stories. This one was built in 1872 and operated on the lonely island with just the lighthouse keeper and his family. A road was not built to the lighthouse until 1927. It is currently maintained by the Coast Guard. The first lighthouse keeper called it “the loneliest job on earth.”
After seeing the lighthouse, I decided to go ahead and ride all the way around this beautiful park. If I hadn’t, I would have always wondered about it. Presque Isle is another of those places not to miss, like the Land Between the Lakes in Kentucky. Presque Isle has a 13-mile paved trail that passes bunches of beach area, an ecological preserve, a monument to Commodore Perry, and plenty of picnic and recreational areas.
Alice at the Riviera told me about the park yesterday, and I just had to see it all. Especially after having an unused heart-shaped jacuzzi in my room all night.
Next I rode through downtown Erie. It is a city of more than 100,000 people, but traffic was very reasonable, unlike many of the bigger cities. I had bike lanes nearly everywhere and plenty of room. Just a little more on Commodore Oliver Hazard Perry. After ships were built in Erie to prepare for battle with the British in the War of 1812, Perry took command of the fleet. Known for being incredibly lucky, Perry defeated the British, the first time that the dominant sea power had been beaten by the Americans. Perry’s luck ran out when he died of consumption in his 30s.
Back on the road, I knew that the map called for an eastern route that followed the coastline of Lake Erie. I can’t get over how big it is. The day was spectacular, with lows last night in the 50s and a high this afternoon around 75. A good tailwind rejoined me after going missing for a couple of days. I got many glimpses of Lake Erie while pedaling a rolling terrain, nothing too steep. There was new pavement on Route 5 while in Pennsylvania, and I was probably having too good of a time. Pretty soon, thousands of acres of grapevines lined both sides of the road in the winery district.
There were two lasting memories from today. One was climbing higher than I had all day to have a spectacular view of Lake Erie while looking over the fields of grapevines. The next was a crossroads that was called Barcelona, New York. Yes, I had passed into New York as I continued to head east. I knew that Barcelona was about the only place for a refreshment stop in the last 50 miles of riding today, but I didn’t expect more. What I found was yet another lighthouse, protecting the same harbor that it had since I think the 1830s. I had a high view looking out over the harbor and imagined countless steamships arriving there during the 1800s. Both of these were definite “Wow” moments, made even better because they were unexpected.
I saw two motels way out from any towns that really tempted me to stop today. Both were just too early in the ride but both had spectacular views of the water. Perfect views for sunsets waiting to happen.
I pulled into Dunkirk, New York, late this afternoon. It was the first bigger town since Erie. So far, I have 72 miles on the day. Once again, I am going back out to try and capture the sunset. I know little about Dunkirk since I am having a hard time with any Internet service here. While making a quick run to the Save a Lot grocery, the worst chain of grocery stores that I have experienced, I noticed that the town seems to be predominantly Hispanic and all seem friendly.
A couple of other recent happenings have puzzled me. A good portion of the convenience stores don’t have ice. Also, many of the less busy ones are requiring high debit card minimums. One store had a $7 minimum.
There is a waterfront park close to my motel, and I plan to head that way shortly. Traffic was so light all day today, probably the lightest of my trip so far. I didn’t meet anyone special, at least not yet. My motel says it has Internet, but not enough to make WiFi work. But all in all, this was certainly one of the best days on the journey.
The map calls for going to Buffalo tomorrow. I plan to do some things there and go into Canada on Saturday or Sunday. Then this cycling journey goes international. With that, I will close for today and head out for another sunset. See you again tomorrow!