Fame monument may be exempt from state law 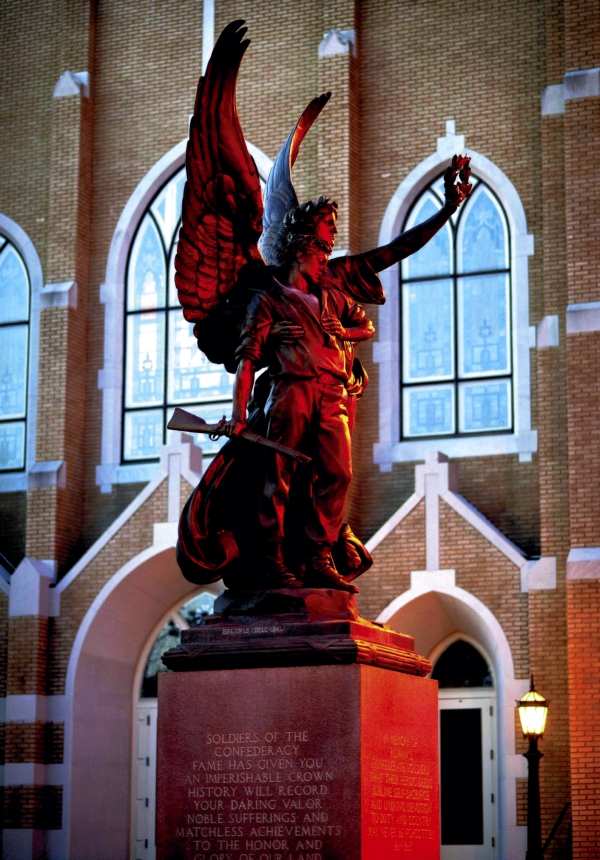 "Fame," the Confederate Monument in Salisbury, stands at the edge of the intersection of Church Street and West Innes Street at sunset, with streetlights illuminating its face. Jon C. Lakey/Salisbury Post

A bill in the N.C. General Assembly that restricts authority to remove monuments from public property may not apply to Salisbury’s “Fame” monument.

The North Carolina House on Tuesday gave final passage, by a 70-39, to Senate Bill 22 after two days of emotional debate about its implications. It would prevent certain monuments — including Confederate war memorials — from being completely removed from public view. Instead, the bill only allows monuments — called “objects of remembrance” — to be relocated to a site of “similar prominence.”

It passed the Senate in April by a unanimous vote. One month after a brutal shooting at a church in Charleston, S.C., in which nine people died, the vote count was closer in the House. State. Reps. Carl Ford, R-76, and Harry Warren, R-77, both voted for the bill. No Republican in the House voted against the bill.

“What’s ironic is that the bill didn’t change or become something different from the Senate to the House,” Warren said.

When asked about his vote, Ford described the bill as protecting all monuments, honoring veterans from all wars and giving respect to the state and national flags. In addition to the portion pertaining to monuments, the bill includes provisions relating to the handling of the U.S. and North Carolina flags. It also transfers custody of certain documents to the Department of Cultural Resources.

The bill now heads to Gov. Pat McCrory’s desk, where it would become law immediately after receiving his signature.

The most controversial portion of the bill, however, may not pertain to Salisbury’s downtown Confederate monument — called Fame — at all.

“I don’t think it does,” Ford said about the bill. “However, I’m also told its on a state highway. I don’t know.”

Property ownership — of both West Innes Street and the grassy median — may further exempt the monument from the bill.

In August of 1908, Mayor A.H. Boyden signed a resolution designating the grassy median at the intersection of West Innes and Church streets as the site of the United Daughters of Confederacy monument. It was later recorded in the Rowan County Register of Deeds Office. However, no formal deed or transfer of ownership for the property exists. Salisbury residents have questioned the validity of the resolution as an official transfer of property rights. Earlier this month, Rev. Robin Tanner, of Piedmont Unitarian Universalist Church, and Rev. Anthony Smith, of Mission House, requested documents from the city pertaining to the Salisbury monument’s history. However, minutes from 1908 city council meetings don’t exist, according to Salisbury City Clerk Myra Heard.

State Board of Transportation Member Jake Alexander, who represents Rowan, says the land beneath West Innes Street and the Fame monument don’t belong to a single entity.

“The right of way was never acquired,” Alexander said. “It’s actually not uncommon in North Carolina for roads that have been around for hundreds of years. It’s just always been a road.”

Typically, the Department of Transportation obtains land rights for roads it maintains. For some projects, land acquisition costs millions of dollars. In Salisbury’s case, West Innes Street is only maintained by the state. The City of Salisbury maintains the grassy median. No one owns the rights to property beneath the section of West Innes Street and the median. No parcel number exists, according to Rowan County tax records.

In an email to Alexander, Division 9 Engineer Pat Ivey said the Department of Transportation researched ownership of the property and couldn’t find a record of state ownership.

In the case of Salisbury’s Confederate veterans monument, the land may belong to no-one. Or, it could belong to everyone.