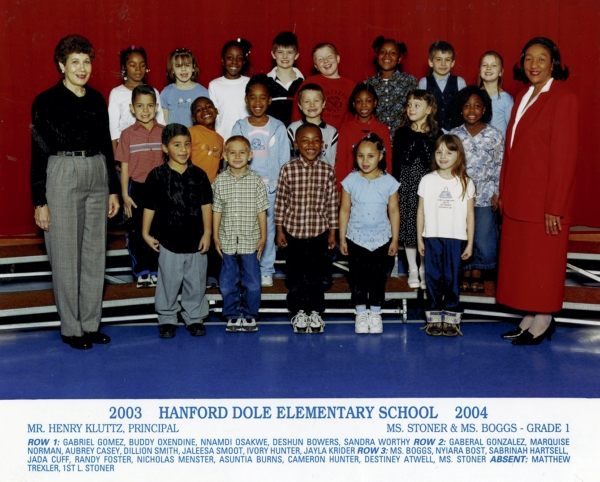 Photo submitted by Linda Stoner These students were first graders at Hanford Dole Elementary School in 2003-2004. Fast forward 12 years: they recently graduated from various high schools within the Rowan-Salisbury School System. Congratulations to the Class of 2015.

GRANITE QUARRY  — The Granite Quarry High School  lass of 1958 held its 57th reunion at Granite Lake  Park on Saturday, July 11, 2015. Hot dogs and hamburgers with trimmings were enjoyed by everyone, as well as desserts of all kinds.

Our next reunion will be decided upon at a later date since no business was discussed and just fellowship and memories were shared by all attendees.

The course is open to those 16 or older with an interest in being a water fitness instructor. Persons who are currently teaching but do not have credentials are strongly encouraged to attend. An advanced course will also be held on the same day for those with a minimum of one year experience teaching water exercise and at least 100 hours of actual experience teaching water exercise.

RALEIGH – Invitations have been issued to the 89th annual North Carolina Debutante Ball. The event will be held in Raleigh on Sept. 10, 11 and 12. The formal presentation of young ladies from across the state will highlight the weekend festivities.

The Terpsichorean Club, comprised of young gentlemen from the Raleigh area, was formed in the 1920s to sponsor an annual statewide Debutante Ball to present many of North Carolina’s prominent young ladies and to honor their families. The Ball has been held every year since 1923 with the exception of the World War II years.

During the Ball weekend there will be eight functions held in honor of the Debutantes, their families and their escorts. The formal presentation at Meymandi Concert Hall on Friday evening, Sept. 11, will be a focal point of the weekend.

The 78th Miss North Carolina Pageant, a state preliminary to Miss America, was held June 17-20 in Raleigh. There were 37 Miss North Carolina contestants and 42 teen contestants from across the state who participated in the competition, which included the phases of evening gown, on-stage question, talent, lifestyle and fitness and personal interview.

Mangum is the daughter of Jennifer Gaines of High Point, and she is a rising junior at East Carolina University. Her platform is “Take the Plunge: Volunteer,” which encourages everyone to find a cause for which they can work to enrich lives. She is active on campus as an East Carolina University Ambassador, and she recently raised enough funds on her own to purchase duffle bags for a program called “Together We Rise.” This program provides the duffle bags to children who find themselves in foster situations with no method of carrying their belongings. She organized a get-together of her friends and other local queens to paint each of the bags that were to be given to the children. Mangum distributed 44 bags, with a variety of items in them such as books and stuffed animals, to Youth Unlimited Therapeutic Foster Care in High Point. She has also raised funds for Children’s Miracle Network and participated in the distribution of the Christmas Happiness items and a Toy Drive sponsored by the Salvation Army. With her other local queens, including Wright, she volunteered to ring the bell this past holiday season for the Salvation Army. Mangum took Aubri Hill with her on her appearances and volunteer activities. Hill serves as Miss Rowan County’s Carolina Princess, which is a mentorship program through the Miss North Carolina Organization.

Wright is the daughter of Pam and Jason York and Steve Wright of Statesville. She attends the James B. Iredell AP Academy at Statesville High School, where she is a rising sophomore. Her platform is “The Love that Binds,” which provides the basis for a mentorship of children who are dealing with a separation or divorce of the family. She has spoken to several school groups around Rowan County, as well as met with guidance counselors and Communities in Schools personnel in the schools to promote her program. She has distributed a book, entitled “It’s Not Your Fault, Koko Bear,” for the school libraries, and donated tote bags with the book and a bear in them for students identified with a need by the counselors. Wright also raised funds on her own so that these bags and books could be purchased for donation. Each student who receives a bag also receives a folder with suggested activities for the parents to do with the children. The Miss North Carolina state project, in addition to Children’s Miracle Network, is the Lighthouse Family Retreat, an organization dedicated to helping families with chronically ill children enjoy family time in a beach environment. For her participation in this project, she provided gifts for the mothers of these children, such as toiletries and other items. Wright was also accompanied to the state competiton by a Carolina Princess, Gillian Keith.

The Carolina Princesses also participated in a production number during each preliminary night and each final competition. Each girl was featured at some point in the number, and also sat in a cheering section for her individual queen.

For more information about being a contestant or a sponsor for the Miss Rowan County Scholarship Pageant, email info@missrowancountypageant.org