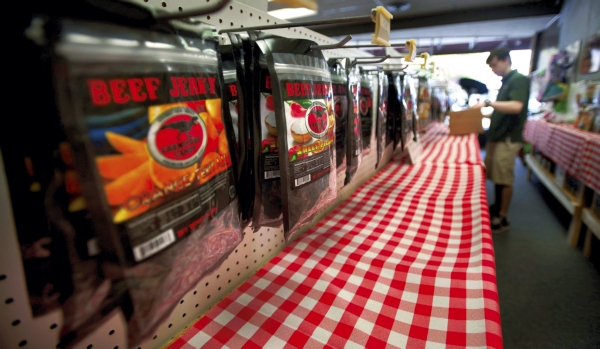 JON C. LAKEY / SALISBURY POST One of the newest downtown Salisbury businesses to open is the Jerky Station in the 100 block of South Main Street. Which offers a wide variety of exotic meat jerky. Brad McDaniel manages the store. Tuesday, July 14, 2015, in Salisbury, N.C.

Craving kangaroo? Jerky Station has that and a whole lot more

The word jerky comes from the Spanish word charqui, which means burn meat.

Salisbury now has a new store selling jerky from 23 different animals. Delmar McDaniel and his son Brad McDaniel are the proud owners of the new Jerky Station on Main Street. The store is where Family Books and Gifts used to be and has undergone quite the transformation.

The story behind the jerky store began when a friend of Delmar told him about the Beef Jerky Outlet in Tennessee. A visit to the outlet sparked their interest in all things jerky.

“We had never gotten into it before then, but now we’re into it,” Brad said.

The father and son considered possible store locations before deciding to set up shop in Salisbury. At some point, they hope to start stores in Boone, Mooresville and elsewhere.

“The store’s really better suited to a tourist area,” Delmar said, but given that he lives in Rowan County, he wanted the pilot shop to be local.

Although the McDaniels don’t make any of their own jerky, they have a total of 20 suppliers across the country from Florida to Oregon. They haven’t done much advertising, other than having a friend dress up in a chicken suit and stroll around downtown.

Upon entering the store, customers face several rows of handmade shelves displaying all types of jerky. Brad and his father built the shelves themselves, and placed checkered fabric over them, giving the store a slightly western feel. Along the walls above the shelves are a series of photographs showing the different types of animals they have as jerky. Some of these include elk, buffalo, shark, tuna, wild boar, turkey, salmon, kangaroo, alpaca and ostrich.

To the left of the entrance are a couple of chairs covered in cowhide and a tree stump table Delmar made himself. The chairs and table face a television screen which usually features a western film. When customers go towards the register, where they can also sample 30 different types of jerky, they look up at a large set of horns mounted on the wall.

Brad said that right now kangaroo is their best seller. He described it as “like beef, but more gamey.”

The brand “Buffalo Bob” is their most popular because it is “cheaper and has exotic meat in it” Brad explained. He also said the store gets a wide variety of customers, most of them being women.

Allana Ansbro is a student at the University of North Carolina at Asheville and a Salisbury Post intern.