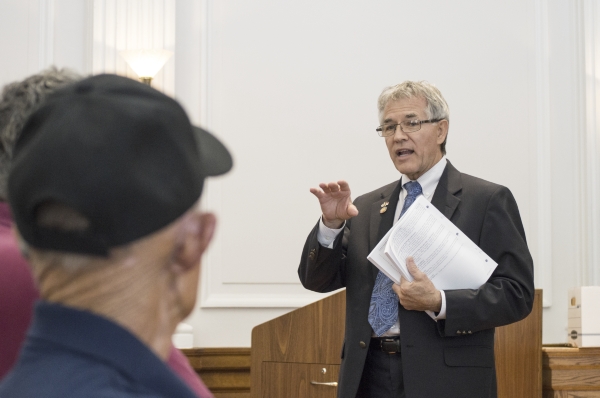 Warren, who crafted the bill, spent a large portion of the hour-long town hall meeting explaining his bill after being prompted by an audience member. Warren said he stalled the bill — titled the Highway Safety/Citizens Protection Act — in the House’s Finance Committee until he’s got enough support in the Senate. The bill was filed on March 23. The House’s last action on it was April 15 in the Finance Committee.

“I don’t want it to get to the Senate and just die,” Warren said.

His bill has been misconstrued through the use of inappropriate rhetoric, he said.

“To say that what we’re proposing is a drivers license would be like calling a tomato and a banana the same thing,” Warren said about his bill. “The only similarities between a drivers license and my proposed restricted drivers permit is that they can drive.”

Warren said a goal of the bill is to bring illegal immigrants “out of the shadows.” After going through a background check, fingerprinting, presenting proof of residence, passing a typical drivers license test in North Carolina and other measures, Warren’s bill would allow illegal immigrants to obtain the ability to drive. The bill wouldn’t change the status of immigrants to legal, he said.

Once caught, immigrants who don’t obtain Warren’s proposed permit would be charged with a felony criminal offense.

The reasoning for his bill, Warren said, is to take action on immigration while the federal government doesn’t.

It’s got support from both Democrats and Republicans, Warren said. The General Assembly’s website, however, only shows Republicans as primary or co-sponsors.

When asked by an attendee, Ford flatly said he wouldn’t support or vote for Warren’s bill.

“It’s not gonna pass the Senate, they’re not even going to consider it and the governor is going to veto it,” Ford said. “Furthermore, I think it opens the door. Some of the people that are supporting it scare me.”

Ford specifically mentioned La Raza — a hispanic advocacy group — as a group he was concerned about.

Before Ford could finish, his response prompted further explanation from Warren, who said he’d worked on the bill for three years.

Near the end of the meeting, Ford explained his stance in further detail. He agreed with Warren — that the federal government should do its job and deport immigrants in North Carolina illegally.

“Harry can laugh, but I can’t support this bill because it makes the problem worse,” Ford said. “Our sheriffs, because of North Carolina law, have complete autonomy. They can do what they want. They have to enforce laws, yes. But, there’s no incentive for them right now to enforce any immigration laws because the federal government is just going to turn them loose.”

Discussion on Warren’s bill came after an overview of the General Assembly’s budget process. Normally, Warren said, the state’s budget is expected to be passed by June 30. This year, the General Assembly passed a continuing resolution — allowing spending to continue at the same levels as the previous fiscal year — and recently selected conference committee members to sort out differences in the House’s and Senate’s versions of the budget.

Warren said all representatives who voted for the House budget were automatically appointed to the conference committee. Warren voted for the House’s budget. Ford didn’t support it with his vote. Ford’s reasoning partially included a number of sharp increases in fees across North Carolina.

The pair expressed some discontent with the 2015 budget process. Warren, who brought several budget revisions he received in a span of a few days to the town hall meeting, said it was tough to fully comprehend all measures in the budget with a short amount of time between revisions. Ford said he is only able to skim through some versions.

The pair agreed that several, major policy measures are included in the Senate’s version of the state’s budget that hadn’t been fully vetted in a committee.

‘A Few Good Men’ showcases a lot of good acting

By Deirdre Parker Smith deirdre.smith@salisburypost.com It’s unlikely you will see a more powerful performance this summer than “A Few Good... read more