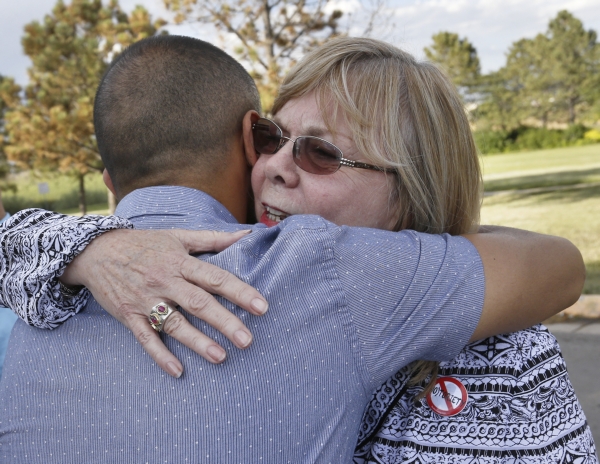 Sandy Phillips, right, whose daughter Jessica Ghawi was killed in the 2012 Aurora movie theater shootings, gets a hug from a supporter after attending the reading of the verdict in the trial of shooter James Holmes at the Arapahoe County District Court in Centennial, Colo., Thursday, July 16, 2015. A Colorado jury on Thursday convicted Holmes of killing 12 moviegoers and wounding others in suburban Denver. (AP Photo/Brennan Linsley)

CENTENNIAL, Colo. (AP) — Families of the 12 people James Holmes killed and the scores he injured in a packed movie theater were relieved that jurors only needed 12 hours to reject the idea that he was legally insane when he opened fire.

Now the trial enters a new phase as the jury decides whether Holmes should die for his crimes.

Starting next week, jurors will hear testimony about Holmes’ mental illness and his childhood. Prosecutors may counter with even more heartbreaking accounts from victims, ranging from those Holmes maimed to the father of his youngest victim, a 6-year-old girl who died in the 2012 attack.

There was a muted, heartbroken sense of relief Thursday afternoon following Holmes’ conviction on 165 counts of murder, attempted murder and other charges. Victims wept and comforted one another in the courtroom during the hour-long recitation of each verdict, holding hands and nodding their heads with satisfaction when their loved one’s names were read.

“We’re all really happy he’s guilty, but we’re all really sad to be here,” said Katie Medley, whose husband, Caleb, uses a wheelchair after being shot in the head during the attack.

The verdict came after 2 1/2 years of legal skirmishing between prosecutors and Holmes’ public defenders and 11 weeks of grueling testimony. The upcoming sentencing phase could easily take another month.

“I’m glad we’re at this point, but at the same time, we have a long way to go,” said Marcus Weaver, who was injured in the attack and whose friend Rebecca Wingo was killed.

Experts say the sentencing phase could prove even more emotionally wrenching as survivors describe the impact of the shooting on their daily lives. It will be a harder decision for jurors, who will have fewer instructions to guide them, said defense attorney Karen Steinhauser, who is not involved in the Holmes case. That jurors swiftly rejected Holmes’ insanity defense doesn’t mean they’ll come to a speedy conclusion about his punishment.

“They’re going to have to decide, for someone who is mentally ill, if a death sentence is the right punishment,” she said. “It ends up being a much more personal decision.”

If just one juror disagrees with a death sentence, Holmes, 27, will be sent to prison for life.

For almost an hour Thursday, Judge Carlos A. Samour Jr. read charge after charge, reciting the name of the victim, the offense and the word “guilty.” Dressed in a blue shirt and khakis, and flanked by his public defenders, Holmes stood impassively with his hands in his pockets the whole time.

The rest of the courtroom was bursting with emotion. Even before the verdict was read, jurors passed around a box of tissues and dabbed their eyes. The foreman attended Columbine High School during the 1999 shooting there that left 13 dead.

When Samour read the first finding — that Holmes was guilty of first-degree murder for killing Jonathan Blunk, a 26-year-old father of two who shielded his girlfriend from the gunfire — many victims’ families burst into sobs, trying to stifle the noise by pressing tissues to their noses and mouths.

When Samour read the name of another murder victim, Jessica Ghawi, her mother, Sandy Phillips, silently mouthed “yes,” and her husband wrapped his arm around her to pull her close.

“We’re very happy this animal, this monster, will never see the light of day,” Phillips said later outside court. “It feels good to have this weight off our backs.”

Holmes’ parents, Arlene and Robert, sat silently holding hands throughout the verdicts. After the final count was read, Arlene buried her face in Robert’s shoulder.

The verdict came three years after Holmes, dressed head to toe in body armor, slipped through the emergency exit of the darkened suburban Denver theater and replaced the Hollywood violence of “The Dark Knight Rises” with real human carnage.

The trial offered a rare glimpse into the mind of a mass shooter, as most are killed by police, kill themselves or plead guilty.

Prosecutors argued that Holmes knew exactly what he was doing when he methodically gunned down strangers as they fled. They painted him as a calculated killer who sought to assuage his failures in school and romance with a mass murder that he believed would increase his personal worth.

He snapped photos of himself with fiery orange hair and scrawled his plans in a spiral notebook he sent his psychiatrist just hours before the attack, all in a calculated effort to be remembered, prosecutors said.

The prosecution called more than 200 witnesses over two months, more than 70 of them survivors, including some who were missing limbs and using wheelchairs. They recalled the panic to escape the black-clad gunman.

The youngest to die was 6-year-old Veronica Moser-Sullivan, whose mother suffered a miscarriage and was paralyzed in the attack.

Holmes was arrested in the parking lot as survivors were still fleeing, and he warned police he had rigged his nearby apartment into a potentially lethal booby trap, which he hoped would divert first responders from the theater.

Holmes’ lawyers argued that he suffers from schizophrenia and was in the grip of a psychotic breakdown so severe that he was unable to tell right from wrong — Colorado’s standard for insanity. They said he was delusional even as he secretively acquired the three murder weapons and concealed his plans from friends and two worried psychiatrists.

The defense called a pair of psychiatrists, including a nationally known schizophrenia expert, who concluded Holmes was psychotic and legally insane.

But two state-appointed doctors found otherwise, testifying for prosecutors that no matter what Holmes’ mental state was that night, he knew what he was doing was wrong.

Jurors watched nearly 22 hours of videotaped interviews in which Holmes, using short, reluctant answers, said he felt nothing as he fired, blasting techno music through his earphones to drown out his victims’ screams.

CHATTANOOGA, Tenn. (AP) — A gunman unleashed a barrage of fire at a recruiting center and another U.S. military site... read more