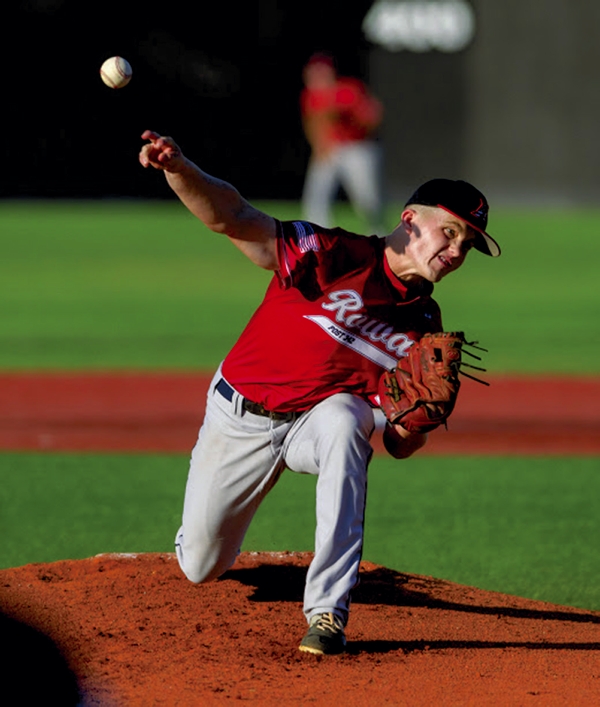 ASHEBORO — In baseball, there’s nothing like having a strong arm and a big inning in your corner. Wednesday night, Rowan County had both.

“I’m definitely tired,” said Myers, who gave up four runs on seven hits with four strikeouts and a walk before being pulled with two outs and a runner on first. “It’s exhausting throwing that many pitches. I had 113 when I left the game. Usually I beg to stay in.”

“It just builds,” Randolph County coach Ronnie Pugh said of the second inning. “You’ve got to make the routine plays. We’ve played well at times in this series.

Top-seeded Rowan County will face the winner of theNo. 2 High Point vs. No. 3 Eastern Randolph series for the Area III Tournament crown in a best-of-three series starting Saturday at Newman Park. Randolph County, seeded fourth, takes on the loser of that series in another best-of-three series to determine Area III’s third team at the state tournament.

“Clint Marsh was out of sight,” Pugh said. “He got us out of a jam in the second and he kept us in it.”

At the plate, Caleb Webster went 3-for-4 with a double and two runs scored for Post 45, while Nathan Reynolds went 2-for-3 with three RBIs.

Post 45 cracked the scoreboard in the bottom of the first inning. Reynolds hit a bases-loaded single to right field, sending home Webster and Kirby Lambert for a 2-0 Randolph County lead.

Ritchie led off with a double to left, and Shepherd singled to right and stole second. Jeremy Simpson looked to sacrifice in a run, but ended up reaching on an error while Ritchie scored. Lee Poteat singled to right, sending home Shepherd for the tying run. Kacey Otto’s single to left plated another run, and Poteat scored on an error to put Rowan County up 4-2. Baucom’s grounder to left plated Otto. Baucom then stole second, took third on Michael Caldwell’s bunt single and then scored on an error for a 6-2 Post 342 lead.

After a Juan Garcia ground out, Heath Mitchem walked to put runners at the corners for Ritchie. That led Pugh to pull Reid for Marsh. Ritchie popped out and Shepherd flew out, ending the top of the second.

With one out in the bottom of the second, Tristan Marsh singled to right, but Reece Daniel hit a liner to Myers, who thew to first for the double play.

Post 45 got a run back in the bottom of the third. Webster led off with a double to left-center field and reached third on an error. After Lambert flew out to left, Rorie and Morrison were both hit by pitches, loading the bases for Reynolds who hit a sacrifice fly to cut the lead to three.

After that, the scoreboard fell silent until the seventh when Ritchie led off with a walk and scored on an error to put Rowan County up 7-3. Rowan County tacked on two more runs in the top of the eighth, loading the bases twice and scoring two runs.

Post 45 tried a rally in the bottom of the ninth as Reynolds hit into a fielder’s choice and pinch runner Zach LaBranche took second on a wild pitch and third on a balk. He then scored on Richardson’s two-out single to right, leading Post 342 coach Jim Gantt to Myers for John Owen. Tristan Marsh popped up to short to end the game.