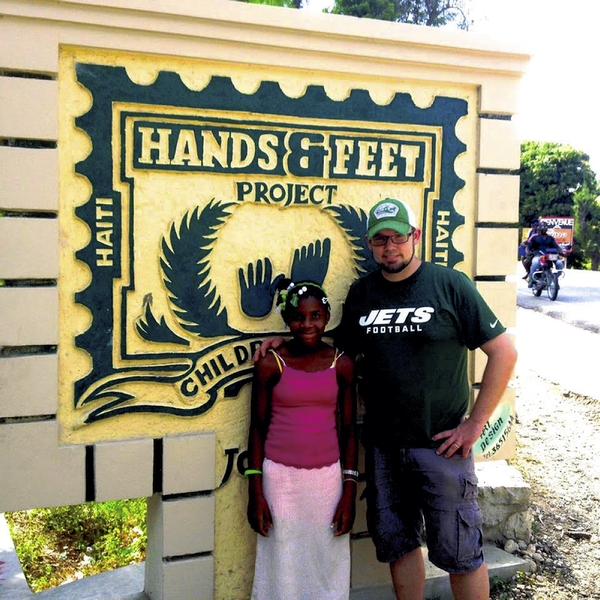 With Kettia, the girl we sponsor at The Hands & Feet Project's Grand Goave Children's Village

My life-changing and completely unanticipated connection with Haiti — the poorest country in the western hemisphere — was born out of my experience as the primary caretaker of my dad who passed away after a 16-month battle with brain cancer in 2012.

It was over the course of my his final 16 months that God led me to understand that addressing the needs of those who are the most vulnerable really should be a top priority for me as a Christian. I’d spent so much of my life focusing my time and energy on myself, but the experience of being the one person responsible for making sure my Dad’s needs were met as his independence dissolved and his needs grew, forever changed my understanding of what it means to be in need and how my actions have the potential to either positively or negatively affect another person’s life in a significant way.

The Christian principle of tithing is one that, up to the point when my Dad passed away, I hadn’t practiced. But, while sorting through my Dad’s modest estate, I stumbled upon James 1:27 and I was compelled to tithe a tenth of what we inherited to Christian organizations involved in orphan care. It was at this time in 2012 that I first learned about The Hands & Feet Project — an organization established in 2004 in Haiti, the poorest country in the western hemisphere, with the Christ-centered purpose of providing family-style, residential orphan care and sustainable solutions that fight against Haiti’s orphan crisis.

My family and I started sponsoring two children that live with The Hands & Feet Project right off the bat, but it was in January 2013 that a significant Holy Spirit-breathed turn of events took the story of my life, and my Dad’s legacy, to another level. As a part of the process of settling my Dad’s estate, my wife and I had the responsibility of selling his house, a modular home that he’d bought for a good price due to the fact that it had been foreclosed upon prior to his purchase.

My dad had moved from upstate New York down to North Carolina about five years prior to his passing in order to help provide daycare for our second child. We didn’t think it would be hard to sell the house and pay of his mortgage since he’d secured such a good deal on it when he bought it, but, after six months on the market, the highest offer we received was for roughly 60% of what was still owed on the mortgage. Throughout the time spent waiting for it to sell, we were stuck making monthly mortgage payments and it was beginning to look like we would be stuck with a significant debt.

Finally, in a moment of mounting frustration due to the circumstances, I collapsed on my bed in prayer asking God to just help us pay off the mortgage. It was in that moment of that prayer that I was inspired to donate any profit that we might get beyond the balance of the mortgage to the work of The Hands & Feet Project if God would connect us with a buyer.

Within one month of that prayer, after having already spent six months waiting on a substantive offer on the house and receiving nothing higher than 60% of what was owed, we closed on the sale of the house for a profit of $2,500. It was amazing!

But it was after following through with the donation of the profit from the house sale to The Hands & Feet Project that God worked through Mark Stuart, executive director of The Hands & Feet Project, to truly transform my journey and my Dad’s legacy by offering to name the kitchen in their new mission facility in Grand Goave, Haiti, after my dad. When I read the e-mail from Mark indicating his gratitude and intent to honor my Dad (though I’d made no request of him to do so in any way shape or form), I couldn’t help but to break down and cry with unbridled tears of joy and relief! The realization that the memory of my Dad — a man who never received the credit he was due as the hard working father, kind-hearted grandfather, and good neighbor that he was — would now be honored in a place where so much real and meaningful good is accomplished for those who most needed it on a daily basis relieved a tremendous amount of the grief that I’d been stumbling through in the wake of my Dad’s passing ten months earlier.

But the dedication of the kitchen and the manner in which my Dad’s memory is now honored by The Hands & Feet Project in Haiti was just the beginning.

I will spend the third week in July serving with the Hands & Feet Project for a second time in Grand Goave, but this time will be leading a group of ten (including my wife and six others who’ve never been to Haiti before) and I’m looking forward to the time that we’ll be there like nothing else. I learned from my first trip, and over the course of my relationship with The Hands & Feet Project, just how much beauty and hope can exist in the face of extreme circumstances. The children of The Hands & Feet Project, and the Haitian people in general, have so much to offer the world and, even in the midst of such poverty, the beauty of the mountains and the beaches, and the taste of the fresh-picked mangoes and bananas, is unparalleled.

So, too, is God’s grace, amidst our daily struggles, if we step through the doors He opens for us.

To learn more about The Hands & Feet Project visit http://www.handsandfeetproject.org