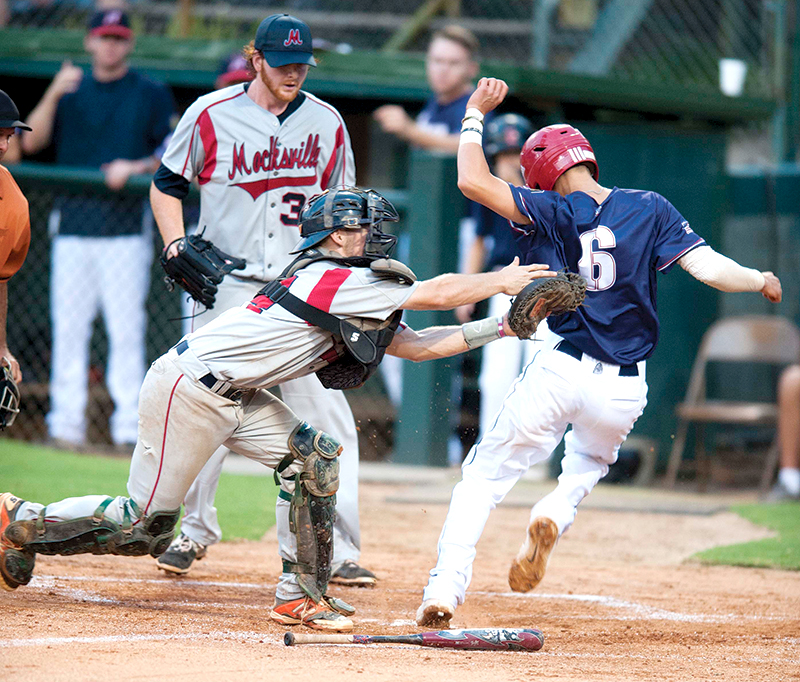 SALISBURY — Fans of the bizarre would have enjoyed Rowan County’s series-clinching win Wednesday at Newman Park.

It was a head-spinning game that featured a 40-minute delayed start because of weather, at least two disputable calls, an assistant coach’s 10-minute argument and eventual ejection, an infield popup that fell to the turf and a roller-coaster ride of a finish. By game’s end, No. 1 Rowan County had a 14-4, seven-inning victory and a sweep of its second-round series against No. 9 Mocksville-Davie.

“When you have a bunch of teenagers playing nine innings, you’re going to see some crazy stuff,” said designated hitter Heath Mitchem. “And we sure did.”

Rowan (20-5) won for the 18th time in its last 19 games and advanced to a third-round series against the winner of the Randolph-Davidson series. Game 1 is scheduled Sunday night at Newman Park.

“It was crazy,” winning pitcher Hunter Shepherd said after boosting his record to 5-0. “But that’s how it is. You just have to keep rolling.”

Rowan prevailed despite Shepherd’s sub-par performance. The left-hander’s usual curve-appeal was missing in action. He had little command of his fastball and ultimately, the strike zone.

“The strike zone was fair,” he said after yielding four runs, three of them earned, and eight hits in 5-2/3 innings. “I just have my release points down. I didn’t have a feel for my pitches.”

Mocksville (10-18) capitalized by scoring two first-inning runs and another on Nolan Stanley’s second-inning groundout. The game took a strange turn in the last of the third, when Rowan scored three times to tie the score. Michael Caldwell blew through a stop sign at third base and scored Rowan’s first run on a close play at the plate. Then losing pitcher Bradley Dzeskewicz issued successive bases-loaded walks to John Owen and Jeremy Simpson.

“You have to take what they give you,” said winning coach Jim Gantt. “But for us I think the key was being patient. We had to wait for our opportunities.”

Rowan trailed 4-3 entering the last of the fifth but exploded for seven runs on six hits. Key plays included Owen’s infield fly that was called for by three players and caught by none. Simpson’s rolling bunt down the third base line loaded the bases with none out. Harrison Baucom smoked a two-run single that short-hopped the left-field wall and Mitchem (3-for-4 with a walk) crushed a two-out, two-run double to right that made it 10-4. In between came Caldwell’s sac bunt that was misplayed for an error at first base and extended the inning.

“You can’t put the game in the umpire’s hands,” said Mocksville-Davie coach Charles Kurfees, who initially protested the game and then withdrew his complaint.  “We lost our focus. We had a big argument. And the game just snowballed away from us.”

Rowan stretched its lead to 13-4 in the sixth when Lee Poteat doubled home a run and Baucom (3-for-5, 4 RBIs) smacked a two-run double to left. An inning later, the game — and the series — was over when Caldwell raced home on a one-out passed ball.

“It was a sweep, but it was a really weird sweep,” Baucom said afterward. “We didn’t have any rhythm throughout the whole series, but that’s what makes it so humbling. Never have I lost faith in this team.”