100 wedding cupcakes: A big order for a reporter 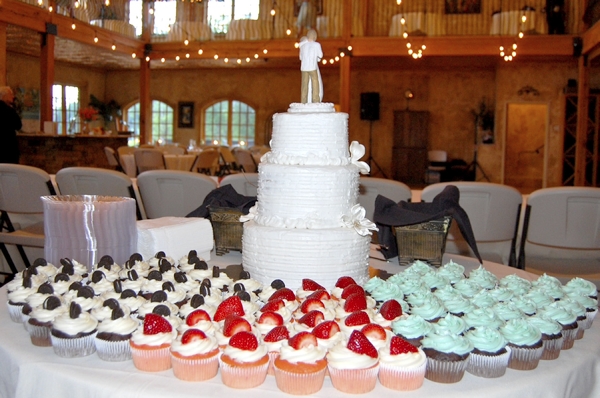 Jeanie Groh/Salisbury Post Making cupcakes for an out-of-town wedding is quite a challenge in summer's heat. Salisbury Post's cupcake queen fills in the details.

By now, it’s no secret that I love cupcakes.

I love baking them, eating them, and most importantly, seeing the joy that comes over someone’s face when they bite into one.

So, I’m sure that there’s no surprise that I am totally on the “cupcakes at weddings” bandwagon.

Other than the bride, wedding cakes are often the most oohed and ahed over piece of a wedding. From unique flavors and fillings to intricate designs to one-of-a-kind cake toppers, there’s a lot of room for a couple to show their personality through their cake.

But wedding cakes can be expensive – up to several dollars a slice (especially if a cake-cutting charge is added by the venue). Perhaps that’s why cupcakes are an option growing in popularity.

Cupcakes can be a much more affordable option for a budget-savvy bride and groom, and they allow the couple to serve more flavor combinations than a single cake. Did I mention that they’re cute, too?

I’ve been baking cupcakes for several years now, and I love every minute of it. Although I’ve filled a few orders for friends and family, baking cupcakes is definitely a hobby and not a professional career.

So when my college friend Kelsi asked me about baking 100 cupcakes for her wedding, I almost told her no.

I had plenty of excuses. I’ve only filled small orders before. I don’t have enough room in my one bedroom apartment to make, decorate and store them. I don’t have the tools I need or a reliable way to transport them.

But, after doing some research, I felt I could pull it off. So, we talked about different color themes and flavors. She decided she wanted strawberry cupcakes with cream cheese frosting, cookies and cream cupcakes and chocolate cupcakes with mint-colored buttercream frosting.

The day before the wedding, I took a vacation day at my real job here at the Salisbury Post to begin preparations.

I started my day by going to the grocery store to get all the ingredients I needed. There were the obvious items such as butter, cream cheese and eggs, but I also needed other things like cake boxes and cupcake liners as well.

After I finished shopping, I headed home to begin baking.

Kelsi wanted 100 cupcakes for her big day – a little more than eight dozen. Because I use cake mixes that make two dozen at a time, I actually had to make 10 dozen to make sure there were enough cupcakes to go around.

Baking went well – until I realized I only had enough vegetable oil for six dozen halfway through the afternoon. So, I had to run out between batches to get some more oil.

One of my biggest concerns was that I wouldn’t be able to transport fully iced and decorated cupcakes from my home in Salisbury to a winery two hours away in near-100 degree weather without cupcakes tipping or icing getting too soft.

So, I decided to make the frosting at my parent’s house in Raleigh the next morning and to ice the cupcakes at the venue itself. Doing this cut the commute time in half, and limited the amount of time the icing needed to be refrigerated.

Frosting is a temperamental beast. If it gets too warm, it will become mushy. If it gets too cold, it becomes impossible to pipe the frosting on to cupcakes and it won’t come out smoothly.

The morning of the wedding, I made the icing and filled the cookies and cream cupcakes with a cream cheese and Oreo filling. Then, I packed up everything I needed to decorate the cupcakes, including a hand mixer and extra everything in case there was an emergency.

We showed up to the wedding several hours early to make sure I had enough time to ice the cupcakes before the wedding started.

When we got to the venue, the staff had forgotten we would be coming to ice the cupcakes there, so they scrambled around to find a place we could decorate the cupcakes. We ended up using a folding table in a side room, but not after they proposed that we use their dusty wine-testing lab located down an intimidating flight of stairs.

Once we got set up, I began piping frosting onto cupcakes, and my sous chef (better known as my fiancé) began slicing strawberries to go on top of the strawberry cupcakes. As I piped the frosting onto the cupcakes, David (my fiancé) topped the strawberry and cookies and cream cupcakes with the appropriate garnishes. As we finished the cupcakes, he transported them to the other room with the cake table and arranged them around the cake (that the groom’s brother made).

When I got the chocolate cupcakes with mint-colored buttercream frosting, however, I began to stress. We had packed that bag of frosting on top of the ice packs in the cooler, and it was too hard to frost the cupcakes. David massaged the bags to soften the frosting enough to pipe it onto the cupcakes. After several minutes, it was still hard, but usable. So, I wrapped up the last few cupcakes, and David put them on the display table as I cleaned up.

We finished everything with just a few minutes to spare to wash up and make it up to the wedding.

Although baking cupcakes for Kelsi’s wedding was a high-pressure experience, I’d definitely consider it doing it again. It was a fun challenge, and I enjoyed seeing the final product.