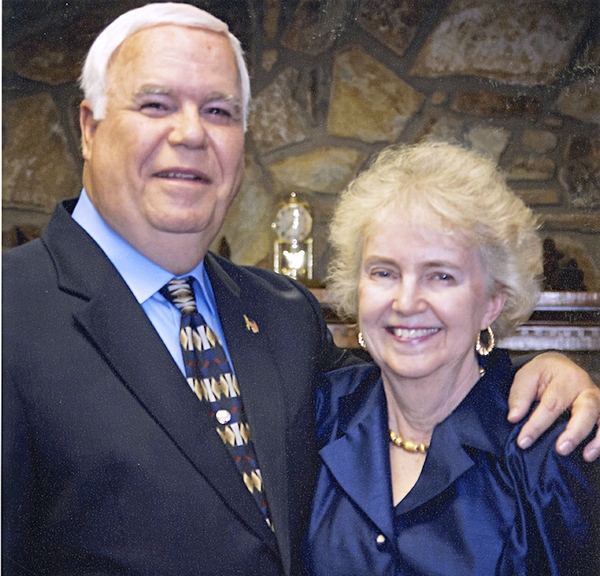 Ralph and Julia Baker celebrated their 50th wedding anniversary July 4, 2015. In the past, the Bakers have flown or driven across the country to celebrate in Las Vegas on their anniversary, but on this grand occasion, they celebrated locally.
The Bakers were married July 4, 1965, at Central United Methodist Church by the late Rev. Dwight Pyatt. Ralph and Julia celebrated their honeymoon at the familiar spot for most honeymoons during that era, Myrtle Beach, S.C. Ironically, the Bakers met in the Fall of 1963 while Ralph, on weekend pass from Seymour Johnson AFB, Goldsboro, and Julia (formerly Julia Gosney from Spencer) were dragging town. Julia and her friend Mary Ellen Bailey (formerly Mary Ellen Gaskey from Spencer) had car trouble on South Main Street and Ralph stopped to help them. It was love at first sight for Ralph and Julia. Another irony is that it was right in front of Walker’s Rowan Shoes where Ralph worked part-time while in high school, while in service and later full-time before starting this own business.
Julia was employed by Dr. W. Smith Kirk for 13 years before joining the family business. She also graduated from North Rowan High School and Salisbury Business College. Mr. Baker was in the first class to graduate from South Rowan High School and took business courses at Salisbury Business College after finishing a four-year tour with the United States Air Force, reaching the grade of Sergeant. Ralph and Julia have owned and founded many businesses during their lifetime and have a large rental property portfolio holding including commercial and residential. The Bakers are longtime merchants and founded Ralph Baker’s Shoes, 428 North Main Street, Salisbury, NC, the headquarters for their businesses.
They are the parents of a daughter, Susan Baker Mills (Josh) and son Ralph L. Baker, Jr. (Terri). They are also the proud grandparents of Ashlyn and Marissa Baker and Jacob and Joseph Mills.