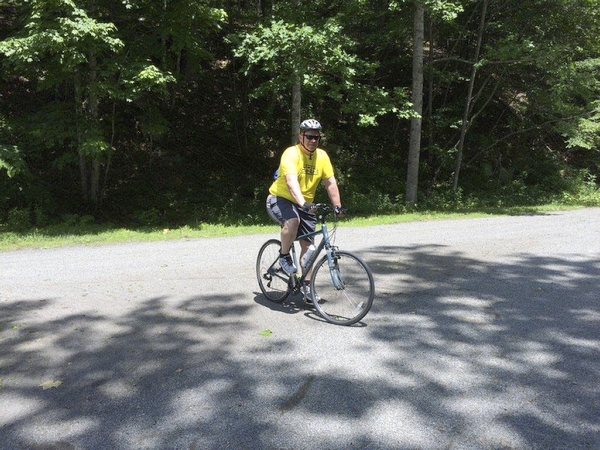 With a bike trip that will keep me busy for the next five weeks, my report on the progress of Brent Parks and Norma Honeycutt is through today. I will only be in touch with them by e-mail and phone for the month of July and the first week in August.

It is the perfect next step. At some point, they will assume the total responsibility of motivating themselves. Accountability will rest with them alone, so here comes a 35-day sample of the rest of their lives. Brent and Norma have continued to progress in their 2015 weight loss and wellness journey. Though the road is still long, both have gained a significant awareness of how to make their goals happen.

Here are a few highlights from June. Brent took his wife and daughter, Wanda and Sarah, to the New River Trail in Virginia for a camping-based bike ride. With the confidence from their ride of 21 miles in the Great Berry Ride at Patterson Farm in late May, Wanda got Brent a new bike for Father’s Day and off they went. Over two days, Brent rode 58 miles on a hard packed gravel and dirt trail that is commonly referred to as a “rail trail.” Reclaimed from old rail beds, the rail trails don’t usually have much in the way of turns or climbing challenge. Brent reported having a great time and was glad to send a picture of his cycling odometer. They already have plans to do more of this.

Norma didn’t have any grand adventure, but she is becoming very adept at using the cardio machines available at the Y and the Forum. With summer here, she also has incorporated swimming into her regular routine, both at the beach and at local pools. Norma also likes a challenging circuit training workout that pushes her whole body. She has a new workout partner after the purchase of a Fitbit HR. Norma keeps track of her workouts, monitors her heart rate, and is especially goal-oriented when it comes to getting 10,000 steps a day. Many fitness authorities rate “10,000 steps” as one of the quickest and easiest ways to maintain general overall fitness.

Norma has been encouraging Brent to also get a Fitbit and to do more than one workout a day on occasion. While often challenging each other with their witty banter, they still meet two days a week to compare notes and catch up. On a recent Thursday, Norma mentioned to Brent that she has just played 36 holes of golf the day before. Brent didn’t fall for her deception and quickly said, “Must have been putt-putt.” He was right. She later told Brent how to program the same interval workout on his upright stationary bike that she was already doing.

While their weight loss has slowed, their physical condition has improved. One of the signs of this is that the same workout that was so challenging several months ago requires less effort now. As per human nature, it is often easy to fall into that now comfortably less challenging workout. The real measure of an athlete is whether they are able to keep pushing themselves higher and farther in a workout. Both Brent and Norma entered July with this commitment in hand.

Here are some of their statements about their training in June. During one particular morning workout, Norma said, “Now that I have opened up these sweat glands …” to which Brent replied, “I sweat as soon as I walk in the door! We need to do more than sitting in an easy chair and eating a Twinkie!”

Brent said, “I plan to take the early spin classes at 6 a.m. on Tuesday and Thursday. I want to do long bike rides on most weekends. Minimum number of workouts will be five per week. I am also going to look into lunchtime classes.”

With one week to go in June, Brent was down 29.7 pounds. Norma was down 30.4 pounds. As a very important sideline, Norma’s husband, Mark, is now wearing a Fitbit HR as well and has been working hard to get his own 10,000 steps daily.

Brent would do well to get his own personal tracker, either a Fitbit or a Garmin. It has elevated Norma’s game and she has now slightly pulled ahead of Brent in results.

Brent wants to lose 15 more pounds by the end of July. Norma will be happy with 6.

As I write this, Brent and Norma head into training on their own for 5 weeks. I have asked them to meet twice a week together at whatever workout that they want to do. I have also asked them to keep me posted on their workouts while I am on the road. Both Tammy Swicegood and Ester Marsh from the Hurley YMCA have promised to keep an eye on them. Tammy said, “I will schedule something with them and push them. They need it.”

It will be fun for me to hear about their progress while I am out on the road. I will catch everyone up when I return. We have made halfway, the other half is about to begin. Let Brent and Norma know that you are pulling for them. They appreciate it when you do.