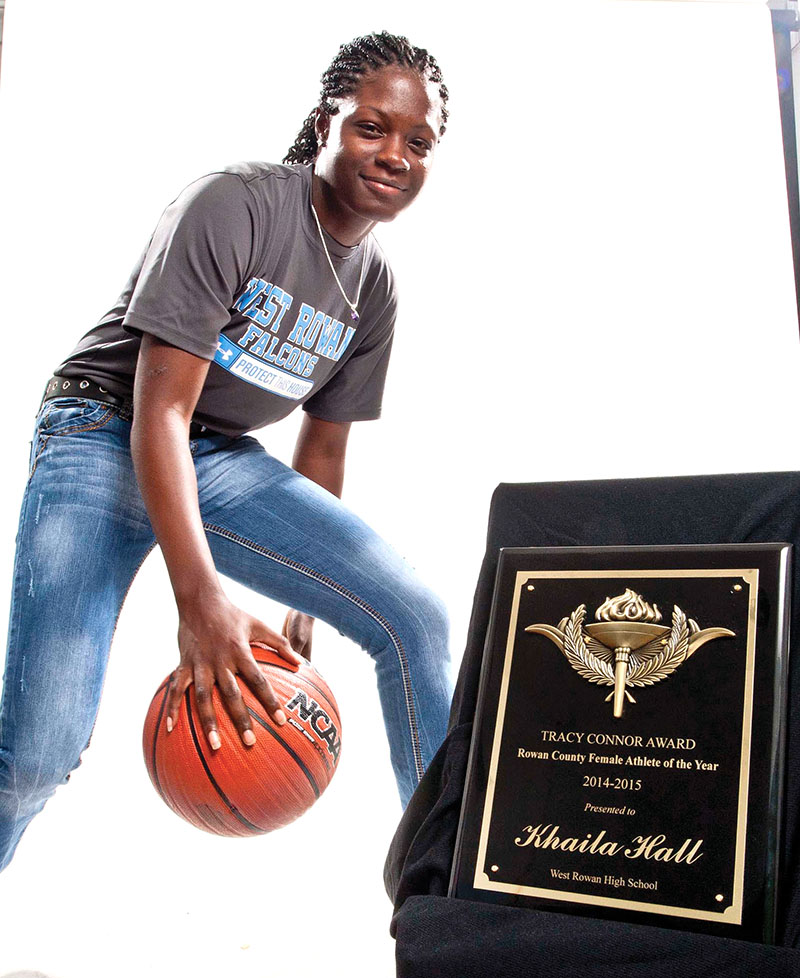 SALISBURY — It’s hard to believe, but Khaila Hall, Rowan County Female Athlete of the Year, was skittish about trying basketball as a youngster.
“I was scared of everything, but our whole family played basketball,” said Hall, a rising senior at West Rowan. ” I got out there that first time and I surprised myself a lot. I’d never been an aggressive person, but on the court I was aggressive. On a basketball court, I felt 10 feet tall.”
Hall stands 5-foot-10, but opponents would swear at times she is 10 feet tall and has four arms. She combines extraordinary quickness and speed with point guard skills, and she can also score consistently. In back-to-back South Piedmont Conference games against Carson and Central Cabarrus in late January, Hall poured in a flurry of 58 points.
While the Rowan County Female Athlete of the Year Award has been presented for decades, Hall is a fitting winner of the first Tracy Connor Award. In her high school days at South Rowan, Connor was brilliant in track and field and basketball. Those two sports also are Hall’s fortes.
“Khaila found out she’d won the award when she was at our basketball camp,” West Rowan coach Ashley Poole said. “She was excited. It’s a huge honor, especially to win it after her junior year. She deserves it. She’s not just a great athlete, she’s very coachable. She’s working all the time to get better. If the gym is open, she’s in there.”
All-SPC and All-Rowan County first team, Hall averaged 15.9 points for the Falcons, while leading her team in assists and steals. She reached 1,000 career points as a junior, becoming the fifth in school history to accomplish that feat.
“I was jittery when I got to 1,000 against Concord,” Hall said. “I must have missed 50 shots before I finally made one, but it was an amazing night.”
Poole counseled Hall before the 2014-15 season that, to succeed in college, she needed to add a reliable outside shot to her driving ability. Hall has made major strides in the past year with her 3-point stroke.
“I’ve been a real gym rat,” Hall said. “It’s been basketball 24/7.”
Hall is playing with the Carolina Reign AAU team this summer. She has attracted scholarship offers from Catawba and Belmont Abbey, although she’s made no commitment yet.
There were a number of candidates for female athlete of the year, including North Rowan’s Demeria Robinson and Aliyah Farmer, Salisbury’s Mary Seifert and Julia Honeycutt, South Rowan’s Leslie Franks, Avery Locklear and Caroline Hubbard, Carson’s Alex Allen and East Rowan’s Kelli Fisher and Brittany Small.
What separated Hall was she as dominant in track and field as she was in basketball. She had three days to rest between the end of basketball and the start of what proved to be a banner outdoor track season.
“I got started in track when I was 7,” Hall said. “But then I got away from it a long time.”
Hall is a jumper and a sprinter. She loved competing in the triple and long jumps for West Rowan’s new girls track coach Jan Dowling and produced nationally elite marks in both events.
“I don’t like the sprints nearly as much as the jumps,” Hall said. “But I do what the coaches want me to do and whatever the team needs.”
In the Rowan County Championships, Hall won the long jump and took the triple jump with a season-best effort of 38 feet, 5 inches. She placed second in the 100-meter dash and helped the Falcons win the 4×100. She was named Field Events MVP.
In the South Piedmont Conference Championships, Hall was champion in the long jump with a season-best 18 feet. She also won the triple jump, took third in the 200 and ran on the second-place 4×100 team. Again, she was Field Events MVP.
Hall qualified for the 3A state championships in both jumps and the 4×100 relay. She placed third in the triple jump and seventh in the long jump. The Falcons’ relay team was 10th.
“I didn’t do as well as I wanted to,” Hall said. “But the state meet was still a great experience.”
Hall enters her senior year with the burden of lofty expectations, but Poole is confident she’ll be even better.
“She’s special,” Poole said. “She doesn’t really like the spotlight, that’s not her personality, but she understands that she’s going to be in the limelight a lot. She’s not that vocal, but she’s always going to lead by example. The young kids believe Khaila walks on water. If Khaila tells them to do something once, they listen. It’s the word.”
It was former West Rowan and North Rowan coach Jeff Chapman’s idea to name the award for Connor, one of the great basketball players in Wake Forest and ACC history. Fans still speak in awe of Connor’s 35-point, 22-rebound game against N.C. State at Reynolds Coliseum. Connor battled through a series of injuries, but she was ACC Freshman of the Year and an All-ACC player twice.
Benny Connor, Tracy’s father, was on hand for the award presentation.
“The Tracy Connor Award is a big honor,” Hall said. “Mr. Chapman told me she’s an even better person than she was a player, and that’s how I want to be.”