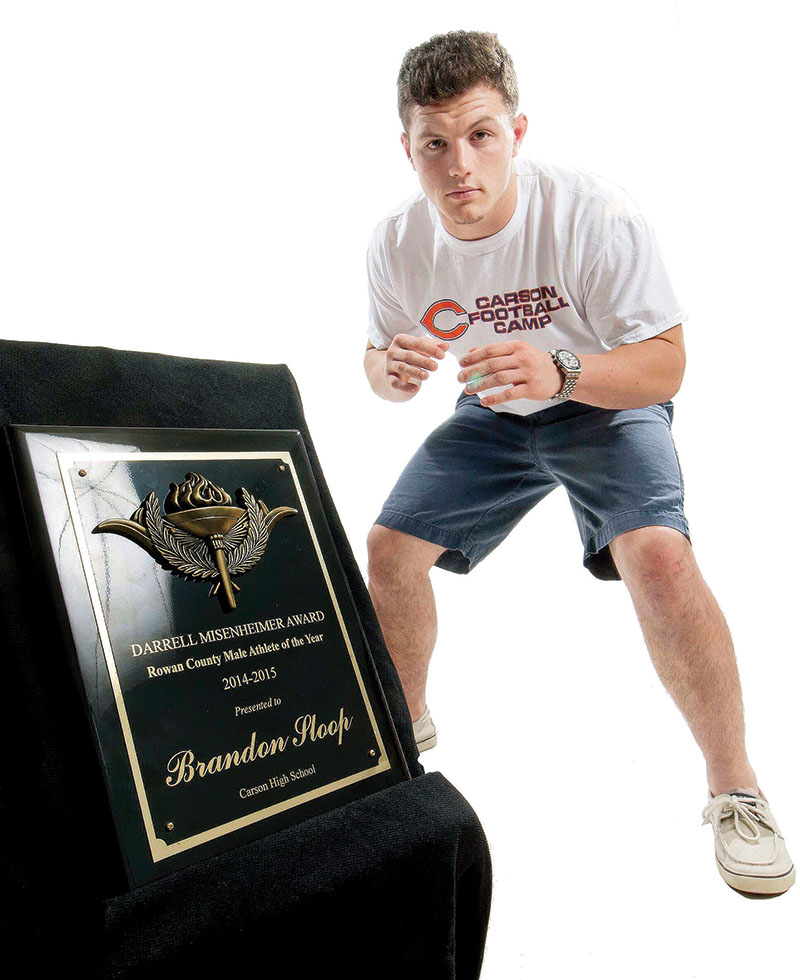 SALISBURY — Brandon Sloop is about the work and the grind. He goes hard no matter the situation — weight room, practice or when the lights are on and the crowd is roaring.

The Carson graduate treats his athletic career like a job. He shows up, clocks in, stays until the job is finished to his satisfaction and clocks out.

“When he goes to practice, it’s just like he’s going to work. He gives everything he’s got in practice just like he does in a game,” Carson football coach Joe Pinyan said. “He fit his role as the guy who kept everything together. He enjoyed it and [laughed at] seeing others goofing off.

“He is one of the guys who likes to lead by example and doing what he did.”

It’s in Sloop’s nature to compete. He hates to lose more than he enjoys to win. Sloop, the recipient of the first Darrell Misenheimer Award for Rowan County Boys Athlete of the Year, said on a scale of 1-10, his competitive streak is a a nine. Pinyan rated it at 12.

Jaron McMasters, Sloop’s drill partner for wrestling, knows about it as well. McMasters, a rising senior, and Sloop wrestled against each other at practice for the past three years. The Cougars like to go live a lot during practice, and things got heated a couple of times without getting out of control.

“…He pushed everyone to be the best. He’d see people doing something wrong, and then he’d correct it.”

Sloop’s business-like approach to practice and games comes from being around sports for most of his life. He said he started playing tee ball around kindergarten or first grade, picked up football in second grade and joined a youth wrestling team in third grade. That’s where he developed his lead-by-example demeanor.

“I definitely believe I am one of the hardest workers, so I hope other people follow that and can learn from that and better themselves the same way,” Sloop said.

This is the first year for the Darrell Misenheimer Award, but the Rowan County Boys Athlete of the Year honor has been around for decades.

The late Darrell Misenheimer was an athletic legend. He was a standout athlete at East Rowan until he graduated in 1975. Misenheimer, who passed away in August 2014, represented the Mustangs in the 1974 Shrine Bowl, was a runner-up at the Western N.C. High School Activities Association state wrestling tournament as a heavyweight, and a state champion shot putter.

Sloop put together an excellent senior campaign for Carson. On the football field, he ran for 15 touchdowns while his 1,361 rushing yards ranked third in Rowan County among running backs.

The Cougars’ football season ended Nov. 7, 2014, with a 56-20 loss to Cox Mill. Sloop amassed 73 yards on 18 carries but was kept out of the end zone. What was remarkable about that was he did it on a torn anterior cruciate ligament in his left knee, an injury he suffered the week before in the first half of a game against Hickory Ridge.

Sloop felt a pop in his knee. He said it hurt for about five seconds and was back to normal. He was about to go back into the game against the Ragin’ Bulls, but a heavy rain delayed the completion of the contest until the following Monday. He played that night too. Although he admitted Thursday he should have stayed on the sidelines.

“We didn’t know what was wrong with it, so my first instinct was to put something on it and get back out there on the field until I get it taken care of,” Sloop said.

At the time, Sloop thought it was just a torn meniscus. After football, he wrapped the knee and hit the mat as a preseason contender for the 3A state championship at 170 pounds. A slight pain wasn’t about to stop Sloop from going for it.

The senior, a UNC Pembroke signee for wrestling, made it to the state tournament in Greensboro with a 40-3 record. A seven-point major decision, a six-point decision and a three-point decision put him into the state final against Rockingham County sophomore John Harris, the top seed from the 3A Mideast region.

Sloop won that match with a 2-1 decision to cap his Carson wrestling career as the top 3A wrestler in North Carolina in his weight class. A point for an escape and another when Harris was called for stalling was all Sloop needed to win. It was just another instance of going about his business and doing what was necessary to win.

“Brandon is a kid that leads by example,” Carson wrestling coach Bryce Vandenberg said. “He’s not very loud or outspoken, but he’s a guy everyone on the team looks up to and follows. He had his own goals, and he was about doing whatever [it took to meet them.]”

That mentality worked not only for Sloop but for McMasters, Sloop’s drill partner. McMasters placed fourth at 160 pounds in his first trip to the NCHSAA state tournament.

It wasn’t until after that weekend in Greensboro that Sloop learned the extent of the injury.

“There was a lot of emotion. I realized I did something that doesn’t happen a whole lot, being able to perform as good as I did with my knee like that,” Sloop said.

He under went surgery to repair the torn ligament three months ago. Since then, the job has been to go through his physical therapy — a mix of stretching and working on an elliptical machine — while preparing to wrestle for the Braves. He said he is ahead of schedule.

On Thursday, he estimated he weighted in around 180 pounds. The plan, he said, is to wrestle at either 165 pounds or 174 pounds.

That gives him roughly six weeks to cut that weight. It’s just part of the job.