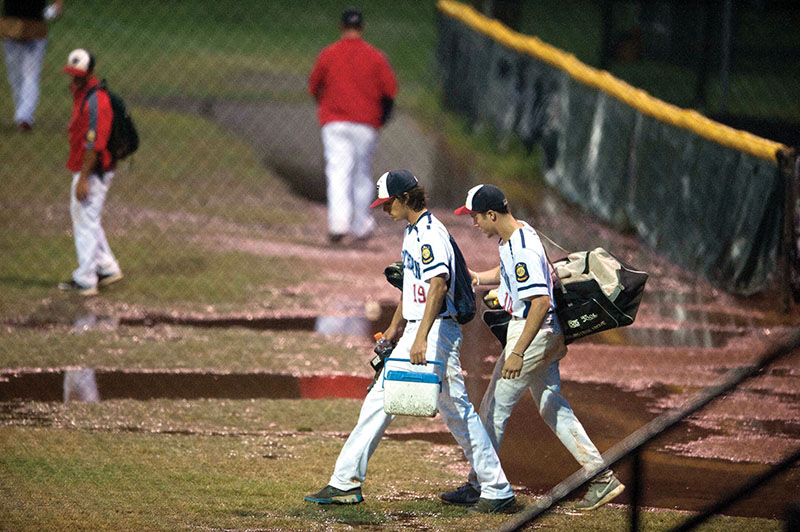 JON C. LAKEY / SALISBURY POST ABOVE: Officials talk with Mocksville-Davie head coach Charles Kurfees and Southern Rowan head coach Ben Hampton on Friday about the weather after a lightning delay. The game was called after the second inning. The teams will try again Saturday to start their series in the first round of the Area III Tournament. Game 1 is at 7 p.m. Saturday at South Rowan High.

LANDIS — Mocksville-Davie’s Kenny Overfelt lost a homer, but neither team lost a ballgame.
A solo homer by Overfelt soared over the left-field fence in the second inning and gave Mocksville a 1-0 lead, but No. 9 Mocksville’s playoff game at No. 8 Southern Rowan was wiped out by weather issues on Friday.
The game was halted by a flash of lightning after two innings. After a lengthy delay, heavy rain arrived and ended any chance to continue.
The teams will try again at 7 p.m. Saturday to play Game 1 of a best-of-three series at South Rowan High.
Only three days are allotted to the play the first round of the Area III playoffs, so the series must conclude Sunday.
A doubleheader has been scheduled for Sunday with Game 2 at Mocksville’s Rich Park at 1 p.m. Game 3, if needed, would be played at Southern Rowan at 7 p.m.
If weather prevents three games from being played, the winner of Game 1 will be declared the series winner. The survivor of this series opens a best-of-five, second-round series Monday against top-seeded Rowan County at Newman Park.
Colby Cranfill pitched for Mocksville on Friday. He got out of a jam in the first inning after a one-out single by Jake Pritchard and a Matt Honeycutt walk. Cranfill allowed a two-out double down the right-field line by Matt Saul in the second inning, but Saul was stranded.
Mocksville’s only hit against Southern Rowan starter Dillon Atwell was Overfelt’s homer.
Southern Rowan coach Ben Hampton wasn’t certain who will be on the bump Saturday when Game 1 is restarted from scratch. Atwell didn’t throw a lot of pitches, so he’s a possibility if his right arm feels OK. Left-hander Blake Johnson is the other option.