David Freeze: The Adventure Has Started 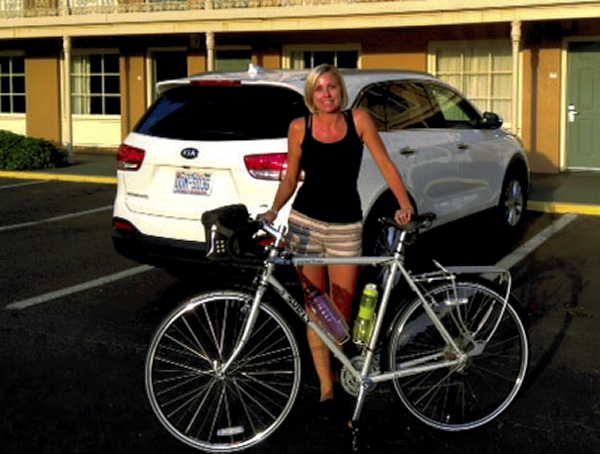 Ready to ride Monday morning. Freeze's daughter Amber and his bike in Mobile, Ala.

I’m writing tonight from the city on the bay, the home of Hank Aaron and Jimmy Buffet. I am in my motel room at the Quality Inn, near the intersection of Royal and St. Louis streets. This intersection serves as the map start of Underground Railroad. This intersection was the site where countless captured Africans were delivered here to be sold into slavery. The practice of importing slaves was banned officially in 1808, although the the law was poorly enforced so that the sale of slaves continued for at least five more decades in this area.
Today has been a very long day, starting at just past 4 a.m. with what should be my last run for 35 days. I said goodbye to the farm and headed south, breezing past Atlanta and into Alabama for my own first visit. I saw Talledega Speedway for the first time and stopped in at the Barber Motorsports Park where I picked up Amber. Motorcycle racing practice was being held today on a road course, similar to those that NASCAR uses.
So far, I like Alabama. It does appear to be hillier than I expected and the state appears to have had plenty of rain. Amber and I searched for a large body of accessible water close by to dip my rear wheel in and we were told that I will have to find that tomorrow. I am in the old part of Mobile, close to the shipyards, but all the water seems to be fenced off. The locals have told me that I will find good water for the purpose tomorrow.
I left the house very early this morning and experienced more emotion than I expected. It was a different feeling from the start of the last two summer journeys. This time, I know that my equipment is top-notch and physically I am strong. But still a few thoughts crept in that were leftovers from the accident in Florida last year. With that said, I am ready to get the show on the road.
Tomorrow will have some highlights from Mobile as I head north. Just before crossing Mobile Bay, I will see the USS Alabama Battleship Memorial. There are lots of historic homes and several forts here and I hope to at least ride by some of those sights on the way out of town.
Mobile was founded in 1702. Over its proud history, the French, Spanish, British and the United States have all claimed it. Mobile also has its own Mardi Gras Celebration, this past version celebrated from January 30 through February 17.
Southern Alabama is very rural and I will experience that for the next few days. There are few towns and not many chances for resupply during this time. Today was cool here and I hope for more of the same.
It is already late and I have map studying and packing the bike to do. I will be back tomorrow from somewhere well north of here and hopefully more organized than I am now. After close to 700 miles of driving today, I might be ready for bed soon. See you tomorrow.