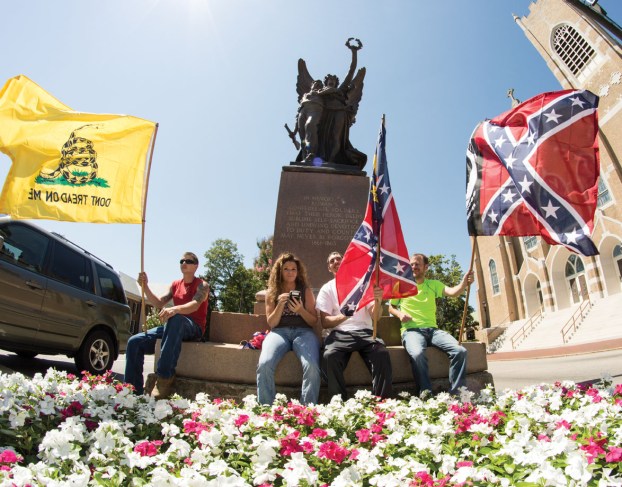 From left: Zach Greene, Christy Burleyson, Jeffery Long and Jack Kluttz wave flags at the base of a Confederate statue in downtown Salisbury in 2015. Josh Bergeron / Salisbury Post Josh Bergeron / Salisbury Post – East Spencer resident Greg Vanzant holds up a sign in protest of a rally that occurred Sunday afternoon. Vanzant organized a second rally a few blocks from the first.

Just before 1 p.m., a group of two dozen people, toting and waving flags, gathered near Salisbury’s Confederate monument on West Innes Street in support of a flag that’s provoked heated discussion across the country. Passersby both cheered and denounced the group’s display of Confederate flags.

Hours later and four blocks away, an opposing, second rally sprung up near the intersection of East Innes and Long streets. The second rally, likewise, drew cheers and jeers. Some passersby chanted with the second rally. Others sped off and revved engines, leaving clouds of car exhaust.

Participants in the Confederate rally expressed varying views, but said the flag shouldn’t be, and isn’t, tied to racism.

Bystanders, who took photos and recorded the Confederate rally, called the public display of the flag on one of Salisbury’s busiest streets unnecessary.

State leaders across America who have called for Confederate flags in public spaces to be taken down. N.C. Gov. Pat McCrory has called for the flag to be removed from specialty license plates dedicated to the Sons of Confederate Veterans group. Stores have removed Confederate merchandise in response to a shooting in Charleston, S.C. Criticism has specifically centered around the Confederate naval jack and the battle flag. The naval jack is, perhaps, most common. It’s rectangular and features a red field with crossing blue stripes with stars. The battle flag is identical to the naval jack, but is square.

Arguments during the first rally sparked conversations about the reason for the Civil War.

“I wanted to come up here and see hate in action,” said Salisbury resident Dee Dee Wright. “If they felt that this was a heritage, then it tells me how uninformed they are. With the Confederate Battle Flag, and let me underscore ‘battle’ because the battle is over; they lost a war to keep black people in bondage.”

Uninformed was a term used by rally participants, too.

“Our education system isn’t teaching what the flag really stands for,” said Iredell County resident Seth Williams. “I support the men that fought and my family that fought, and it wasn’t for slavery. It was for high tariffs, independence and states’ rights.”

He said the rally was important to discuss the flag’s history in a public setting.

“Slavery was a part of it, and it’s not something that we can just bypass,” Williams said. “However, this is the South, and a part of what was the Confederate states. You can’t just take that out of American history in general.”

Some Salisbury residents who gathered nearby to watch the rally worried about the image that publicly displaying Confederate flags presents to outsiders.

“I’m not mad at what they’re doing, but it shows a lack of togetherness,” said Salisbury resident William Peoples. “They said they’re Christian. Then why be so divisive? The flag is clearly causing problems.”

Peoples, a resident and native of the South, said the Confederate flag isn’t his heritage.

“It’s going to scare corporations away from bringing jobs,” People said. “If they see people doing things that are divisive, why would they want to bring jobs here? What does this rally do to help?”

The first rally lasted for hours. Participants sat on the base of a statue dedicated to Confederate soldiers, or stood near the intersection of Church and West Innes streets.

The second rally started Sunday evening. Vanzant said he called close friends shortly after hearing about and seeing Sunday’s Confederate rally. It’s disrespectful to victims and families of the Charleston shooting to hold rallies on public streets in support of the Confederate flag, Vanzant said.

“No one is talking about the real issues,” he said. “We really need to do away with all of the signs that are symbolic for negative things in society. We’re not talking about civil rights. We’re talking about human rights.”

A Salisbury police officer was present during the first rally. Police showed up twice at the second rally.

Neither was broken up by police.

During the second rally, police asked the group to turn down music playing from inside cars parked in a nearby lot. After the police request, the second group decided to leave.