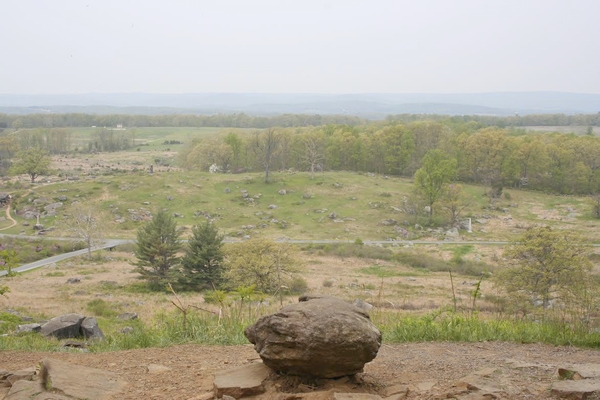 The view from Little Round Top, the highest point on the battlefield that General Lee tried and failed to obtain. Crucial sites from the battle are visible from this vantage point. Susan Shinn/For the Salisbury Post

The fields are green, their split-rail fences mended. The cannons have long since fallen silent. But the land here seems so sorrowful. It is a quiet, contemplative place, strewn with statues. Never forget.

As part of a Lutheran Heritage tour with St. John’s in May, our group toured the Gettysburg battlefield. Being female, I’ve never much understood war, and I think I understand it less now, having visited Gettysburg.

I’ve never much traveled north of the Mason-Dixon line, and honestly, I was a little curious about how the South would be portrayed. But the visitor center and our battlefield guide presented a well-balanced story of those three days in July.

The battle of Gettysburg, which took place July 1-3, 1863, has been called one of the bloodiest of the entire Civil War. In those three days, it’s estimated that some 50,000 soldiers died, out of a force of more than 90,000 Union and more than 70,000 Confederate soldiers.

The turning point of the war came here, when Union soldiers successfully defended Cemetery Ridge in an assault known as Pickett’s Charge.

“It was a terrible thing,” he said.

At the visitor center, we watched the short film, “A New Birth of Freedom,” narrated by Morgan Freeman. We then viewed the impressive Civil War cyclorama, a circular painting, 42 feet by 377 feet, created by the French artist Paul Philipoteaux. It’s the largest painting of its kind on display in North America. Its five-year, multimillion-dollar restoration was completed in 2003.

Then it was on to the battlefield with our guide, David Eisenhart. The two armies met here by chance, as the Confederates were looking for a supply of shoes.

With some 30,000 casualties, the fighting overwhelmed the small town of Gettysburg. I knew there was a Lutheran seminary at Gettysburg, but I didn’t know it played such a pivotal role in the battle, caring for wounded soldiers. Fighting took place all around the campus, including on Seminary Ridge.

Day two of the battle ended in a tie, Eisenhart said, but on day three, Gen. Robert E. Lee authorized Pickett’s Charge, resulting in huge losses for the Confederate Army. Lee took the blame, and it was the beginning of the end of the war, Eisenhart said.

We visited the North Carolina monument, created by the sculptor who designed Mount Rushmore. We stood atop Little Round Top, which with the peak called Big Round Top represented the desired high ground for the forces. The Union held its ground.

From that high vantage point, we could see Devil’s Den, which to me was not unlike the Gates of Hell I saw in the Holy Land earlier this year. There and at the Peach Orchard, terrible fighting took place.

After the war, Eisenhart said, the veterans came and with their help, different states placed monuments at important places. There are hundreds throughout the property.

We ended our visit with a short prayer service in the Gettysburg chapel. It seemed fitting after such an emotional morning. We also had the chance to tour the seminary’s museum, which features several floors of fascinating exhibits. Photography was just coming into vogue during the war, and photographers for the first time were able to capture the horrors of war on film. There’s a photo of a soldier, his mouth shot away. It is hard to look at. There’s also a photo of a surgeon as he prepares to operate on a young soldier in front of a large tent. There are men holding the wounded man’s legs. The surgeon carries a huge saw in his hand.

They say that war was fought to end slavery, to protect rights, to defend freedom. Whatever the reason, brother rose up against brother. Families were torn apart. Lives and limbs were lost.

In light of recent events in our country, perhaps it’s a wise thing to look back and ponder the tragic costs of what a civil war can do.

After having visited that hallowed ground, I know this now more than ever: It’s time for the fighting to end.

For more information about the Gettysburg Museum and Visitor Center, visit www.gettysburgfoundation.org.