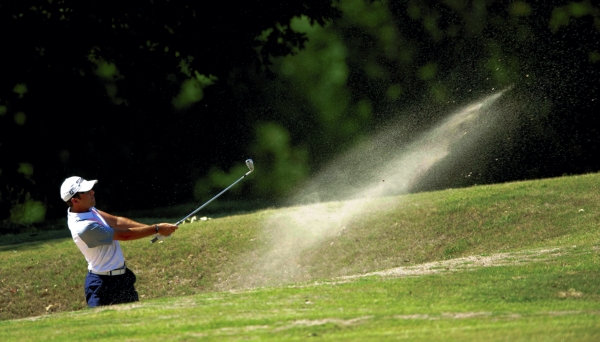 Matt Hardman comes out the sand trap on the 11th fairway during the Rowan Masters on Sunday.

CHINA GROVE – Matt Hardman won his second Rowan Masters tournament in a row Sunday afternoon at The Warrior Golf Club, but don’t look for him to return to defend the title next summer.

The May graduate of Catawba College defeated Justin Lefler, 4 and 3, in the finals of the marathon three-day match play event, then promptly jumped in the car with his father to begin a 400-mile journey back to his hometown of Gettysburg, Pa.

After playing several more amateur tournaments this summer, Hardman, 22, plans to turn pro by joining the e-Golf Tour in August, as well as play in some tournaments on the Hooters Tour in November and December in Florida.

“It was a great week for me,” Hardman said. “It has been a fun event for the past two years and it is such a test, if you make it to all five matches because you are looking at a potential 90 holes of golf. All of the guys I played are great players. To win against such a strong field two years in a row is just awesome.”

It was also the second year in a row Hardman defeated Lefler for the championship. To reach the finals of the 13th annual tournament Sunday afternoon, both golfers birdied the 18th hole to win, 1-up, surviving tough tests in the morning semifinals. Hardman edged fellow Catawba golfer Jeb Bennett, while Lefler outlasted 15-year-old Michael Childress of Salisbury, the co-medalist in qualifying and the second seed.

“To be honest, I felt like I really had a tough bracket to come through,” said Lefler, 30, of Cleveland and the the golf superintendent at Rolling Hills Golf Club. On Saturday, Lefler edged Chris Owen, 3 and 2, then outlasted N.C. State golfer Davis Richards in the quarterfinals, 1-up, in 20 holes. It only got tougher for Lefler with Childress and Hardman in back-to-back matches on Sunday.

“Matt played great and he did what he needed to do to come out on top,” Lefler said. ” I felt like as the afternoon went on, I was getting just a little bit tired. I didn’t have everything in the tank I wanted to have, or as I like say, I was about as sharp as a wooden spoon.”

Neither finalist was particularly sharp in the afternoon, although Lefler rallied with birdies on seven and nine to square the match at the turn. But Hardman turned the tide his way for good by winning both 10 and 11 with bogies as Lefler started having problems keeping it in the fairway. Hardman went 3-up on the par-5 13th, as Lefler conceded after hitting out of bounds on his drive. The match ended on the 15th hole as Lefler three-putted for a bogey while Hardman recorded a par.

“The wind today was tricky and to be honest I was emotionally trying to save myself in case the match kept going,” Hardman said of his own less than stellar play in the finals. “I was really just doing what needed to be done on a couple of holes, based on what my opponent was doing rather than just playing the course.”

Hardman recorded four birdies and three bogies in the finals but ironically, each of the bogies was good enough to win the hole.

The other two semifinalists, Bennett and Childress, were scheduled to play a third place match Sunday afternoon but opted out since Bennett had to go to work and Childress, a sophomore at the Cannon School, headed off to a golf camp at Duke University.  Bennett, a rising sophomore golfer at Catawba and son of former Indians football coach David Bennett, claimed third place honors by beating Childress in a game of rock, paper, scissors.