Pugh retires, recognized with Order of the Long Leaf Pine 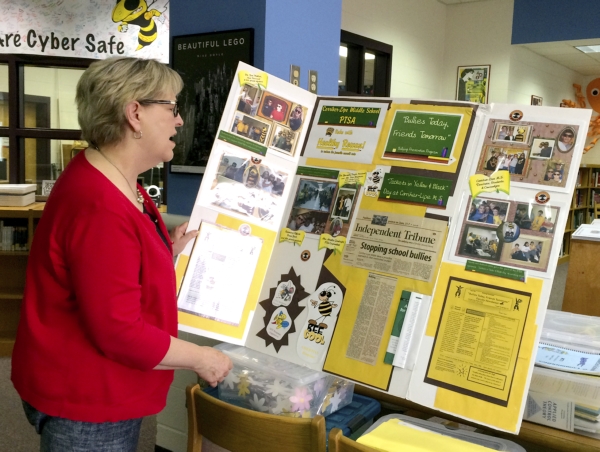 Pugh talks about Corriher-Lipe's the Mix It Up Council. Jeanie Groh/Salisbury Post

“I’ve been the principal, but I really leave here as a teacher,” Pugh said

Pugh began her career with Lexington City Schools, where she taught elementary school for 21 years.

During her time at Lexington City Schools, she also became one of the original North Carolina Teacher Academy teachers. She traveled across the state, providing professional development for kindergarten through eighth-grade teachers.

“I came to middle school sort of on a dare,” she said.

Pugh applied for and received a seventh-grade English teaching position in the Alamance-Burlington School System.

During the summer of 2002, Pugh came to the Rowan-Salisbury School System with the North Carolina Teacher Academy to provide professional development.

Pugh applied and accepted the position at Corriher-Lipe that summer.

She began eight days before the teachers did that year.

Over the last 13 years, Pugh has put her heart into Corriher-Lipe Middle School.

“I love the variety of middle school,” she said, adding that there are more things for students to participate in, such as sports and clubs.

“If you can engage them in middle school, then you’ve really done something,” Pugh said.

“This period of life is so transformational,” she said.

Students “come in as children” and “leave like young adults,” she said.

“They’re not children anymore,” she said.

Pugh said she’s especially proud of her work with the student Human Relations Council, now known as the Mix it Up Council.

The group started as a lunch period when students intentionally sat with people they didn’t normally talk to.

The group has made a positive influence on the school over the years, and it even won the Martin Luther King, Jr. Award one year.

Although she’s retiring, Pugh’s dedication hasn’t gone unnoticed. She was awarded the Order of the Long Leaf Pine, the highest civilian award in the state of North Carolina.

Pugh’s family nominated her for the award, and she was selected. It was presented at a retirement party for Pugh after school let out.

Pugh said that she’s going to miss her students after she retires.

“That’s why you do this job,” she said. “It really is about the children.”

“All I’ve ever known is school. That’s going to be a major transition,” she added. “This was a good time with the change,” Pugh said, citing the “phenomenal” year that just wrapped up as the district rolled out its one-to-one digital conversion.

Pugh said she wants to spend more time focusing on her health during retirement.

“I want to be healthy for a long time,” she added.

When Pugh took the job at Corriher-Lipe, she wasn’t able to sell her house, so she decided to keep it. Because of that, she said, she plans to move back to Alamance County to be closer to her family and church in Burlington.

“I have two granddaughters that I don’t spend very much time with,” she said.

Her church is heavily involved in two of her passions – justice and poverty issues.

“I want to pursue some other interests,” Pugh added.

Growing up on a farm, Pugh was active in 4-H, and she loves cooking and gardening.

Pugh said the two have spent a lot of time together and that German has asked some “really good questions.”

“I think she’s going to do a fantastic job,” Pugh said.