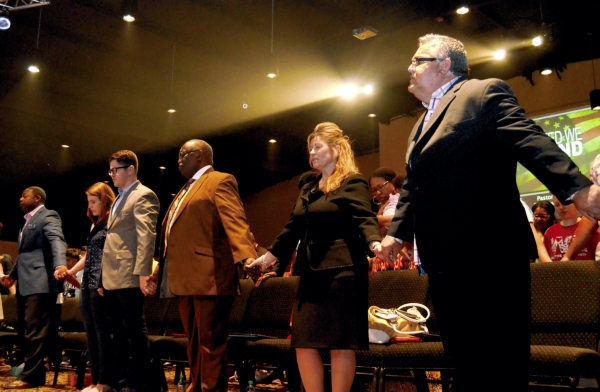 “We are here to say the nine lives matter. Every life matters,” said Bill Godair, pastor of Cornerstone Church.

It was Godair’s words that set the tone for a Tuesday night community prayer service held at his Webb Road church. The service was simple in its goals — pray for the victims of the Charleston mass shooting and their families, the local community and the United States as a whole.

He credited the family of those killed with showing love, kindness and forgiveness during such a difficult time, especially to shooter Dylann Roof. Some of the family members of the shooting victims told Roof during a hearing shortly after his arrest that they forgave him.

“What that young man wanted was to start a race war, but what he did was cause a love war. The least we can do is fight for love,” Godair said to the crowd gathered.

“We are united. We will stay united,” Godair said.

Bishop Harvey Rice of Mount Calvary Holy Church, who is the longest serving pastor in attendance with 43 years in ministry, is a longtime friend of Godair.

Rice said he’d wanted to do something and Godair gave him an outlet to be apart of “something good.”

Rice said what good can come out of the tragedy in Charleston is an outpouring of love.

City Councilwoman Karen Alexander said she too has been friends with the Godairs for many years and was honored to be asked to participate. She said everyone has mourned with the victims in Charleston.

Alexander said this service is about the community and how they are hurting.

Josh Vernon, pastor of Ecclesia Church, is the shortest serving pastor in attendance with four months in local ministry, said like Rice he wanted to do something and was given an opportunity by Godair to participate.

Vernon said it was God that opened the door for he and his church to be able to participate in the service.

“Every time there’s an opposition, there’s a time of opportunity,” Vernon said.

“Prayer is not a last resort, but a first response,” he said.

Taylor said he received a call from Godair about taking part in the service.

It was a necessity that he and his church be there “not just because of the plight in South Carolina, but as a wake up call to all.”

Taylor said he believes in being proactive instead of reactive and it is a start to trigger something reactive.

He said “just because something isn’t happening around our doorstep doesn’t mean we shouldn’t get involved.”

“The church has to be united,” he said.

Retired Pastor Yvonne Derrick Mebane is a member of the 7th Episcopal District and attended the same ordination class as the Rev. Clementa Pinckney and was in the same church conference as shooting victim Daniel Simmons.

She traveled from Texas, made a stop in the area to be with her son and daughter-in-law and then she’ll continue to travel to Charleston.

“Prayer is starting a revival in America. I’m a firm believer in prayer,” Mebane said.

She said the shooting victim’s lives were not lost in vain.

There were 24 churches represented at the service, 10 cities from North Carolina, South Carolina, Texas, Pennsylvania and Ohio.