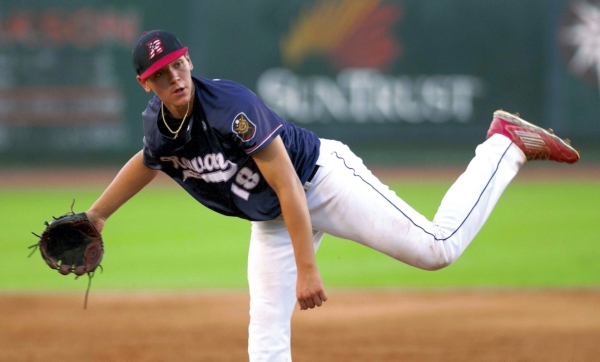 SALISBURY — The mercury continues to soar at Newman Park.

First-place Rowan County made sure of that Thursday night when it routed visiting Stanly County, 12-2, in seven innings.

“Ever since this hot spell hit North Carolina, our sticks have gotten hotter too,” Heath Mitchem said after 10 straight Rowan victories turned into 11. “At the beginning of the year we were hitting, but we weren’t scoring a lot of runs. Now we’re playing more as a team and things are falling our way.”

Rowan (13-4, 8-0) sits atop the Area III standings with five regular-season games remaining. It compiled a season-best 18 hits against Post 76, even if 17 of them were singles. Mitchem had four hits and four RBIs. Harrison Baucom went 3-for-5 and scored twice. Michael Caldwell had three hits and stole a base. And Riley Myers (3-for-4, three runs scored, two RBIs) sent the sweltering crowd home early when he singled home Baucom to end the game.

“That’s the kind of team we have,” said coach Jim Gantt. “We don’t have any real power guys, but they can hit it. They have good approaches at the plate. They like to come and work. Two weeks ago on a Sunday I was out here working on the field at 2:30, trying to get ready for a 7 o’clock game. And we had a bunch of guys out here already. That’s what has turned it around.”

These are giddy times for Gantt and Co., who haven’t lost since June 4. Last night they wrapped a week’s worth of sharp, ground-ball singles — smashes that whipped through the infield in no time flat. Eight different times they collected consecutive hits. Five hits came in a three-run fourth inning and four more were delivered in the last of the seventh.

“We’ve really been squaring it up lately,” catcher Dustin Ritchie said after going 2-for-4 with two RBIs and producing Rowan’s only extra-base hit — a run-scoring double down the right-field line in the sixth. “It seems like we hit everything hard and right at them, which isn’t a bad thing.”

Neither was the work of master moundsman Hunter Shepherd, a tall lefty who has emerged as the staff ace. He allowed one earned run in 6 1/3 innings, induced nine groundouts and had retired nine straight men before issuing a four-pitch walk to Matthew Lambert, the last batter he faced.

“Everything felt good tonight,” said Shepherd, now the owner of a 4-0 record and an ERA below 1.00. “My change up got better as the game went on. And my curve was effective.”

Stanly (5-14, 2-7) had six hits, but none after the fourth inning. That left Stanly Coach Wil Huneycutt peering under the hood, searching for answers. “They only flew out three or four times,” he said after Post 76 dropped its fourth game in three days. “There were lots of ground balls, which is what you want, but they all seemed to find holes at the right time.”

Perhaps Mitchem, who gave Rowan a 4-2 lead with a bad-hop, two-run single in the third, said it best. “I was actually a little upset with my approach,” he said. “With a runner on third I was trying to elevate the ball. I couldn’t do it, but that’s just the way the night went.”