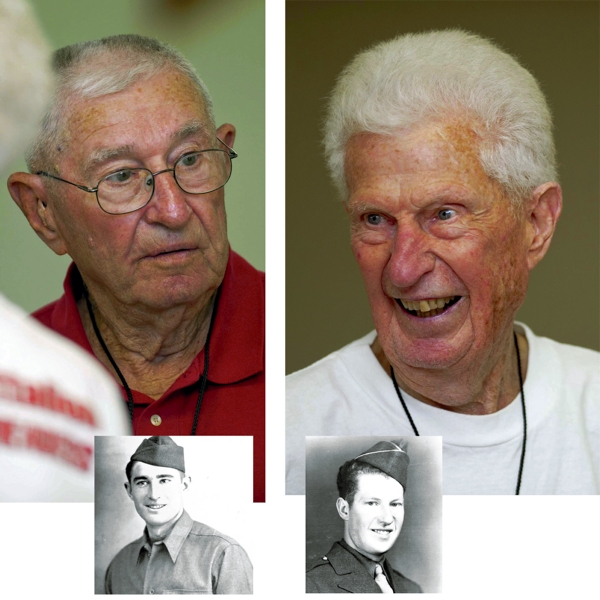 It’s likely Jim Deal and Bob Kluttz, this year’s grand marshals for the Faith Fourth of July Parade, will be riding toward the front in a convertible.

That’s OK with them. After spending much of World War II as gunners inside Sherman tanks, Deal and Kluttz can deal with the open sky.

As young men — still teens when they were drafted — Deal and Kluttz were part of the 737th Tank Battalion, the youngest tank battalion to leave the United States. During the fighting in Europe, the battalion’s men became known as “Patton’s Spearheaders.” Kluttz was a gunner in Co. A; Deal, in Co. C.

Today, Deal is 92; Kluttz, 91, but they remain active and just recently attended their tank battalion’s 68th reunion in Rowan County.

The 737th had a uniquely Southern flavor. Of the 750 18- and 19-year-olds drafted for the battalion in late 1942 and sent for a year’s worth of training at Fort Lewis, Wash., 300 were from North Carolina and 150 each were from Alabama and Georgia. Most of the N.C. recruits came from the Salisbury, Fayetteville and Hickory/Valdese areas. Rowan County alone had 32 men in the 737th, including Deal and Kluttz.

Their year’s training included maneuvers in Oregon and artillery firing in Yakima, Wash. The battalion’s staging area before heading off for Europe was Camp Miles Standish, between Boston and Providence, R.I. The men then had additional tank training at the Arbury Park estate in Warwickshire, England, before eventually landing in Normandy July 12-13, 1944, and immediately confronting a landscape hedged in and mined.

Military history shows the 737th spending 299 days in actual combat, starting with its landing at Omaha Beach. It saw some of its fiercest action in the Battle of the Bulge.

It was Patton who lauded the 737th battalion’s assault crossings of the Sauer and the Rhine and swore the men and their tanks had webbed feet.

Kluttz says none of the tanks he was in were ever lost, though he saw a German Tiger, with its 88-mm cannon, take out tanks in front and behind his. Kluttz wore out two 75-mm cannons on his own tanks before freezing his feet and being sent back to an English hospital for three months with frostbite.

Deal had shrapnel rip into his legs when he tripped on a land mine.

After the war, Bob Kluttz returned to North Carolina and fashioned a long career as a brick mason and contractor. He retired in 1983.

At the tank battalion’s recent reunion, Deal and Kluttz were two of the only three men who could attend, but a 69th reunion already is planned for 2016.

First, however, there’s a parade to attend and a convertible in waiting.