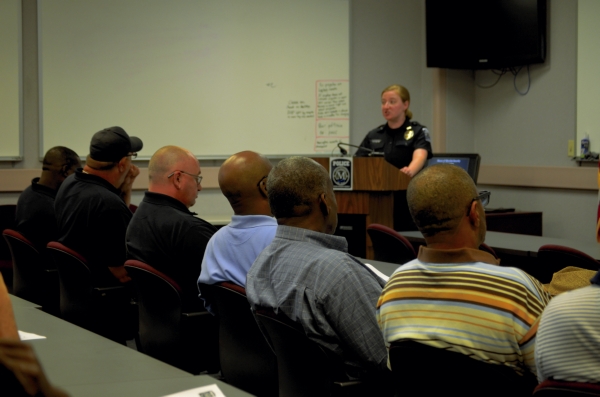 Mooresville Police Department hosted a house of worship security training session two days after a gunman walked into a Charleston church and allegedly shot nine people. The police department has held these sessions before, but hosted the Friday session in the wake of the events in South Carolina. Local pastors and church members attended the event. Shavonne Walker/Salisbury Post

MOORESVILLE — Just two days after a man walked into a Charleston, S.C., church and allegedly shot and killed nine people, area churches are wondering if similar violence could strike their houses of worship.

Mooresville Police hosted a training session Friday that provided tips for for local churches, clergy and community members on how to establish a safe and secure environment for its congregation and visitors.

Crime Prevention Officer Lauren Childers encouraged those in attendance to create a plan of action by assessing the individual church’s needs. A church may need to install an alarm system, create a security team, obtain background checks on church personnel, or invest in security cameras.

Charleston shooting suspect Dylann Roof, 21, was shown on surveillance video walking into Emanuel African Methodist Episcopal Church and leaving in his vehicle after authorities say he spent an hour at the church before the shooting occurred.

Childers told the small group during the second session of the day to assess any risks the church or place of worship may have, to include conducting a building and grounds survey of the facility. She also said to make sure the building is safe in case of a fire or other emergency.

The officer said law enforcement can often help churches with their site survey by looking at potential dangers like unlocked doors or windows, where to place exterior lights or if the church may need regular police patrol or security alarms and cameras.

She urged churches to have a system set up for child care that would require a signature or other check-in and check-out feature for children in a church nursery or day care. She also advised the group to have everyone, especially those who work with children, undergo a state and national criminal background check.

Some churches may believe a surveillance camera is out of their financial reach, but Childers said it would be a wise investment. She suggested a camera that has a clear picture, is in a visible spot and advised against using fake cameras.

Childers said if someone walks into your church who is disruptive or violent the best thing to do is remain calm.

“The calmer you are, the less chance there is of a disruptive person becoming violent,” she said.

Also, if people remain calm, it also increases their chances of getting a more accurate description of the perpetrator.

She also suggests not to fight, argue or attempt to use a weapon against the person.

Unless this person becomes physically violent or has a weapon, then take what action you feel is needed to protect yourself or a third party form imminent danger, Childers said.

Other helpful tips she mentioned are keeping the interior doors locked, escorting visitors in and out of hallways or office spaces, controlling and keeping track of the number of people who have keys to the building, install exterior or motion lights and considering silent or hold-up alarms.

Rydell Cowan, who is a deacon at New Life Mission Baptist Church in Troutman, said he attended the meeting because he wanted to learn more about how his church can protect itself, if violence occurs.

His church has a security team made up of church officers who observe the parking lot and lobby.

“I wanted to be informed and receive updates on the law and what legally the church can do,” Cowan said.

His tip for other churches would be to be aware of someone who backs into a parking space, especially if they are someone who has never been there.

He spoke of an incident at his church where someone backed into a space so the license plate wouldn’t be visible and that person later stole a vehicle from the parking lot.

Jeffrey Wallace, pastor of Living Water Ministry in Troutman, said his church has already put in place some of the tips officer Childers suggested, but he was interested in learning more of what could be done at the church.

When asked why he attended Wallace said simply — prevention.

“We have to be proactive in providing our congregation with a peace of mind as far as feeling safe,” Wallace said.

“Our purpose is to come out and learn,” he said.

Wallace said his church does have parking lot security, someone to rove the church during service, flood lights, and they limit the number of people who have keys to the building and offices.

He would like to improve the checkout system for the children at the church, but advises any church to diversify their security team to include men and women.

Childers said the police department first did a training session in January and decided after the shooting in Charleston that it was time for another session.

The most important tip Childers said she hopes people glean from the training sessions is to get a security team in place, even if the team is merely there to observe and then report suspicious activity to police. She encouraged churches to contact their local law enforcement agency for other valuable tips.