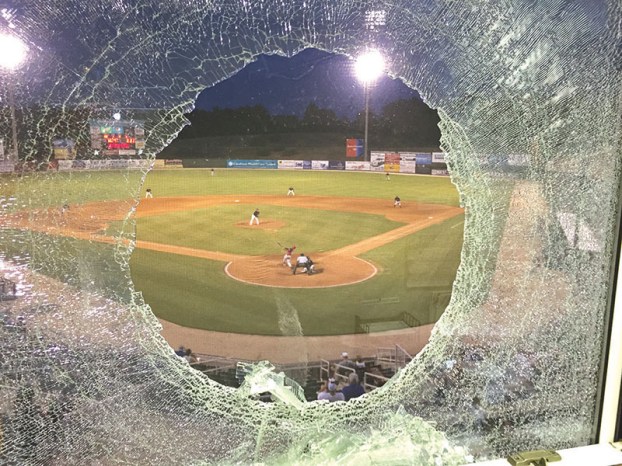 ADAM HOUSTON / SALISBURY POST Kannapolis’ Thad Lowry pitches Thursday against the Hagerstown Suns. The window to the press box was broken on a foul ball by Kannapolis’ Nick Delmonico earlier in the night.

Intimidators: Delmonico has another break-through night

KANNAPOLIS — Newcomer Nick Delmonico probably hasn’t worn out his welcome — even if he did smash a press box window Thursday night.

The Intimidators’ designated hitter made his third game with the team a memorable one when he went 4-for-5 with four RBIs, all after his first-inning foul ball sprayed shattered glass onto the seats outside the press box.

“I guess they’ll take it out of my paycheck,” the 22-year old joked after Kannapolis routed Hagerstown 13-5 at CMC-NorthEast Stadium. “I heard something, but I didn’t know I broke the window until [after] the game.”

Delmonico’s screaming foul was a tone-setter for lefty-swinging slugger, who was assigned from Birmingham on Tuesday. He doubled home the game’s first run moments later, added a pair of singles and then tripled into the right field corner to give the Intimidators (33-34) a 10-1 fifth-inning lead. With a shot at the cycle, he grounded out in his final at-bat in the seventh.

“He’s getting back into baseball shape,” manager Tommy Thompson said after Kannapolis snapped a three-game slide. “I don’t know how long he’s going to be here with us. He’s had some tremendous offensive nights.”

Delmonico, a 2012 South Atlantic League all-star with Delmarva, didn’t waste any time getting reacquainted with Kannapolis. He homered in his first plate appearance on Tuesday — calling it “a dream” — and is hitting .455 with three extra-base hits and five RBIs.

“Today at BP I just tried to shorten up my approach and square up the ball,” he explained. “I tried to take that over into the game. It’s just good to get going and be back in baseball.”

Delmonico had plenty of help from his supporting cast. The Intimidators collected 15 hits and mounted an 8-0 lead after two innings. Infielder Ryan Leonards went 4-for-5 with a double and knocked in a fourth-inning run. Hunter Jones reached base four times and scored three runs. And shortstop Eddy Alvarez — who will join teammate Brett Austin at next Tuesday’s all-star game in Asheville — made a Ringling Brothers catch to rob Hagerstown’s Austin Davidson of a hit in the top of the eighth.

“I didn’t think he had a chance,” Thompson said afterward. “He had some good air time right there.”

Not to be overlooked was another sturdy, if unspectacular, pitching performance from right-handed starter Thad Lowry. The 20-year old Texan yielded two runs in six innings and won his eighth game.

“I didn’t have my best stuff,” he said after winning his fourth straight decision. “My fastball was down, my changeup was better. Those long innings kind of made me a little cold.”

“His fastball wasn’t as fast as it usually is, but he located good,” he said. “His breaking ball wasn’t as sharp as normal, but he pitched, he bulldogged it. That’s the sign of a really good pitcher when you don’t have your great stuff but you compete and give us six great innings.”

NOTES: Wrestling legend Hacksaw Jim Duggan threw out the first pitch. … The Intimidators visit Greensboro this weekend, then break for the all-star game before opening a nine-game homestand on June 25.