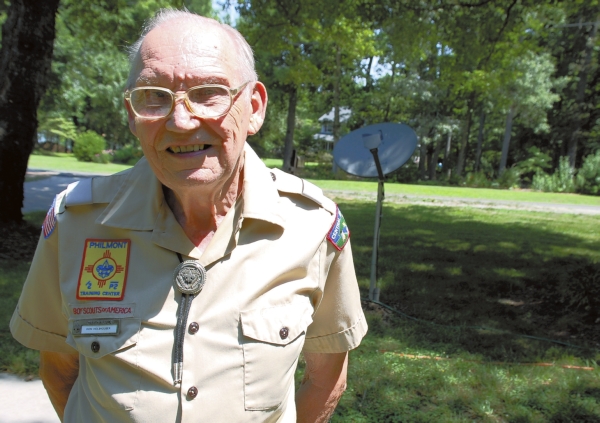 Donald Holshouser has been a leader in local Scouting for 65 years. Mark Wineka/Salisbury Post

HIGH ROCK LAKE — On his big dining room table, Donald Holshouser has spread out all the identification cards, certificates, degrees, patches, awards, books, photographs, paperweights and plaques he has accumulated during his 65 years in Scouting.

The thing Holshouser likes best is almost the smallest thing on the table. It’s the bright red patch of Boy Scout Troop 333 with the number “60” also stitched in.

The patch was presented to Holshouser during the 60th anniversary of the troop, based at St. Matthew’s Lutheran Church, and it means a lot because he was one of the troop’s founding leaders in 1950, starting out as assistant Scoutmaster.

Back then, St. Matthew’s pastor David Johnson told Holshouser, “You can go as far in Scouting as you want.”

“I took him at his word,” Holshouser says.

Troop 333 had 16 Eagle Scouts during that brief time period. When Holshouser took over the troop, it had dwindled to nine boys. By the time he stepped down in 1964, the roster had grown to 50 Scouts.

“The job I cherished the most was the eight years I was Scoutmaster,” Holshouser says, explaining how meaningful that small red patch is.

But his adventure in Scouting was just starting. The future held more significant leadership roles for Holshouser in the Rowan District and Central N.C. Council of Scouting.

What Holshouser doesn’t immediately tell you is how he created the Campmasters program for Central N.C. Council and watched  it become the model for Scout camps nationwide.

For 40 years, he served as director of the council’s Campmasters program, before stepping down this February at age 85.

“I told them two years ago, ‘I’m getting old, and you need to look for a replacement.'” Holshouser recalls.

Terry Tate took over the job, but that doesn’t mean Holshouser’s Scouting career is over. When scheduled, he still serves as a weekend campmaster at Camp John. J. Barnhardt in Stanly County.

But Holshouser keeps going back to that Troop 333 patch and his long-ago days as Scoutmaster in a rural part of Rowan County where boys didn’t have much else to do but enjoy the great outdoors.

And Holshouser knew all about that.

“I’ve been a river rat all my life,” he says. “I know High Rock Lake like the back of my hand.”

Holshouser was born in the Rowan Mills community outside of Salisbury, but his family moved to his mother’s birthplace on Clark Road near the lake when he was 2. He was one of four children.

His father farmed their 100-acre spread, and once the worst part of the Depression was over, he also went to work at the N.C. Finishing Co., making 25 cents an hour.

“We thought we were rich,” Holshouser says. “At least it was a job. He was a hard-working man. My mother was a hard worker, too.”

Holshouser attended Rockwell High but quit early to take a job at the Southern Railway transfer shed in Salisbury and Spencer. He held that job for 14 years.

Meanwhile, he married sweetheart Geraldine Sides in 1949, and soon Johnson, the pastor at St. Matthew’s, was twisting Donald’s arm to become one of the adult leaders for a new Boy Scout Troop at the church. The trouble was, Holshouser was three months shy of his 21st birthday — the minimum age for being a leader.

“They sort of slipped me in under the rug,” he says.

The troop formed Aug. 5, 1950. Forest Stoner served as Scoutmaster, and Holshouser was his assistant for the first five years. There was a year’s worth of disorganization under a new Scoutmaster before Holshouser took over in 1956.

“I was an outdoorsman,” Holshouser says, “and I think that has a lot to do with being a Scoutmaster, most definitely.”

He adds he had the best assistant Scoutmaster ever in Osco Basinger. “You could always count on him,” Holshouser says.

Geraldine Holshouser says her husband and the Scout troop gave boys on the lake end of the county an important activity. “These boys down here really enjoyed their Scouting experience,” she says.

It didn’t hurt that the couple’s home, where they have lived since 1951, was next to St. Matthew’s Lutheran Church.

Before Boy Scouts of America quit offering the program for adult leaders, Holshouser, who had never been a Scout as a kid, earned his Tenderfoot, Second Class and First Class rankings along with many of the boys in his troop.

In 1959, Troop 333 was recognized as one of the outstanding troops in the country.

Meanwhile, Holshouser also wanted to steer his work career in another direction. He earned his GED when he was 33. He graduated from Salisbury Business College and also earned a two-year degree in industrial management and supervision from Rowan Technical College.

Holshouser landed an office job at Thomas & Howard, and when he became night manager, he had to give up his Scoutmaster’s post for Troop 333 because it conflicted with the weekly meetings at night.

Holshouser later would become shipping manager for DMI Furniture Co. before going on to management positions with Ryburn Farm Equipment and Davidson Tractor and Equipment Co. before taking an early retirement in 1988 for health reasons.

He had strokes in 1975 and 1980 and says he only has survived this long thanks to good doctors and a good wife.

Holshouser and his family formed a corporation leading to the Leisure Point and Dutchman’s Point campgrounds, now managed by his son, Mike. Mike probably knows High Rock Lake better than he does, Donald says, and he keeps his parents well stocked in fish.

Though he couldn’t continue as Scoutmaster for Troop 333, Holshouser devoted himself to the Rowan District and Central N.C. Council, which oversees seven counties encompassing eight districts.

Holshouser would become district Scout commissioner in Rowan County for 12 years. In 1988, he joined the Central N.C. Council as an assistant commissioner. He told each district he would devote a month per year to them — “I was at their disposal for the month,” he says.

Some of the Scout meetings led to long nights because the council’s territory reaches to the S.C. line in Union County and east into places such as Wadesboro and Troy.

He might finish a 10 p.m. meeting in Monroe and still face an hour’s drive home.

“There were times when I felt like a Scout widow,” Geraldine says.

The creation of a Campmasters program for Camp Barnhardt started with a telephone call Holshouser received in 1974. John Bush, chief Scout executive for the Central N.C. Council, told Holshouser the council had an important job for him to do.

Bush and his assistant, Bob Farrell, traveled to Holshouser’s home on Bringle Ferry Road and explained how the Atlanta regional Scouting office, on request from the Boy Scouts of America’s national office, had asked the  Central N.C. Council to come up with a Campmasters program that could be used at Scout camps throughout the country.

Holshouser agreed and went to work on the program in September 1974. He told each of the eight districts to send him their two best commissioners, and the Campmasters program was established Feb. 8, 1975.

“It didn’t really seep in it was a national program,” Holshouser says.

Campmasters essentially perform the duties of a camp ranger between 3 p.m. Friday and 3 p.m. Sunday. Councils were finding they had no reliable ways to staff Scout camps such as Barnhardt on the weekends or give the rangers deserved time off.

Bob Lefler was the ranger at Camp Barnhardt, and he was so dedicated he essentially was on call every day of the year. Lefler would hardly take any time off, Holshouser says. Even when the Campmasters program provided a regular schedule of Scout leaders to oversee the camp on weekends, Lefler wouldn’t leave — unless Holshouser was the campmaster.

The campmasters are needed for every weekend except the five weeks devoted to summer camps. Holshouser eventually learned that other men who weren’t commissioners also wanted to participate, and he says hardly anyone drops out of the schedule once they are penciled in.

A campmasters is responsible for checking in Scout groups and making sure they have at least two adult leaders. If Scouts are in the pool or on the lake, he makes sure they have a certified lifeguard with them. If they’re using the rifle range, he determines whether a qualified instructor is on hand. Campmasters receive training in first aid. They also serve as security against potential vandalism.

Wives and families can accompany the campmasters on the weekend duties, and they use the Health Lodge as headquarters at Camp Barnhardt.

Holshouser would meet twice a year with the men who volunteered and make out a six-month schedule.

The program became the model used at Scout camps elsewhere. In 1992, Holshouser traveled to the Philmont Scout Ranch in Colorado and gave a class on Campmasters to 49 commissioners from 38 states.

Besides serving as a Scout campmaster, Holshouser is still teaching Sunday School at Emmanuel Baptist Church, and he also goes door to door routinely to distribute New Testament Bibles on behalf of The Gideons International.

Approaching 66 years of marriage, he and Geraldine continue to enjoy High Rock Lake. They had three children — Joyce, Debbie and Mike — and, yes, Mike is an Eagle Scout.

“The hardest Eagle Scout I ever had to get through,” Donald says.

Mike has two boys, one of whom already is an Eagle, and the other is on the verge of completing all the requirements.

When the day comes in which that grandson earns his Eagle, Donald Holshouser expects to be there, pinning it on.

He continues to go as far in Scouting as he wants.