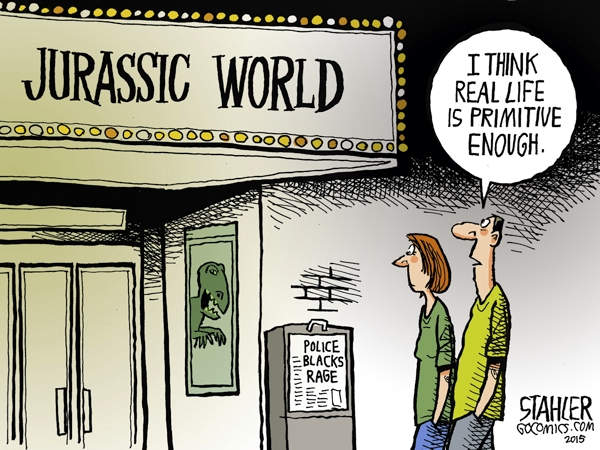 Not a seat was available in the first show for an updated version of “Jurassic Park.”  The dinosaurs were captivating and a bit different but still lacked the evolutionary feathers that would eventually give us birds, though their disproportionate gigantic size let them reign.

This time they could think and communicate, acting collectively to hunt for sport, not food. Unfortunately, their enemy could be man if he got in their way.

As an aside, how one can run in high heels like Bryce Dallas Howard, the female star, was mind blowing.

As a biologist by undergraduate degree and physician trained in family medicine, I knowthe possibilities of genetic manipulation, as well as the safeguards lacking when such is unleashed were clear and not to be disregarded. As smart and inventive as man can be, there is a God who is still in charge of the underlying order though mankind often wants to undermine such and play God.

The new dinosaurs of “Jurassic World” were created from taking part of the genes of one species and planting them in another, resulting in breeding out certain characteristics.  This is not unlike that done with purebred dog combinations yielding a labradoodle or other designer dogs. Test-tube babies, as well, can be bred for characteristics such as blond hair and blue eyes or even gender, with preferences for males among the Japanese.

Wheat is manipulated to deal with a changing environment which may feed the hungry in developing nations. Clouds can be seeded to produce needed rain.

This movie gives a view of the tragedies which can be unleashed when things go wrong when man is in control.

Though we have long believed that one’s sex is determined by one’s 46th sex chromosomes — X and Y —  it is not quite that simple. A spontaneous mutation can occur in cell lines giving us people with XXY (Klinefelter’s Syndrome), Xx (Turner ’s syndrome with a defect of one of the two xs normally expected in a female) or other anomalies as yet to be determined.

Bruce/Caitlyn Jenner,  with six children from his seed, is genetically a male. The persona transition to female is one that doesn’t negate his genes but does alter his realities as well as ours.

As with fences and an isolated island for research such as was done in “Jurassic World,” science makes advances without oversight and safeguards on parameters crucial to our lives and our world.

Monsanto Corp. has stored for replanting at  some point in time one of each kind of tree known to the world, thereby giving them control of future feed stock.

The Johns Hopkins University has profited immensely from the cervical cells of one Ms. Henrietta Lacks from which  a multi-billion dollar molecular industry has spawned billions, including the genome project and many  vaccines. Yet her family lives in poverty.

Bowman Gray participated in the eugenics experiments on those considered mentally impaired — similar to sterilization efforts undertaken by the Nazis — for which the Republican-led North Carolina Legislature has finally offered some compensation.  And daily we consume unlabeled genetically altered food with no understanding of its potential for harm or good.

The “Butterfly Effect” posits that what is done at one point in time may alter the world in ways yet to be determined at some future date.

The movie “San Andreas” is more fact than fiction in dealing with the world’s fault lines and resulting potential for massive disasters without early earthquake warning systems. California’s droughts and water controls are but one shot noting the possibility of a water war leading to an internal civil war.

The effect on the butterflies may be but one warning system. If we don’t  wake up  to pay more attention to the world and our interactions with it, we may be on the path to becoming mankind’s dinosaurs.

Dr. Ada M. Fisher of Salisbury  is a former member of the Rowan-Salisbury Board of Education and current Republican National Committeewoman for North Carolina.

Laurels to Food Lion for its Food Lion Feeds program, which just celebrated its first anniversary. So far the program... read more