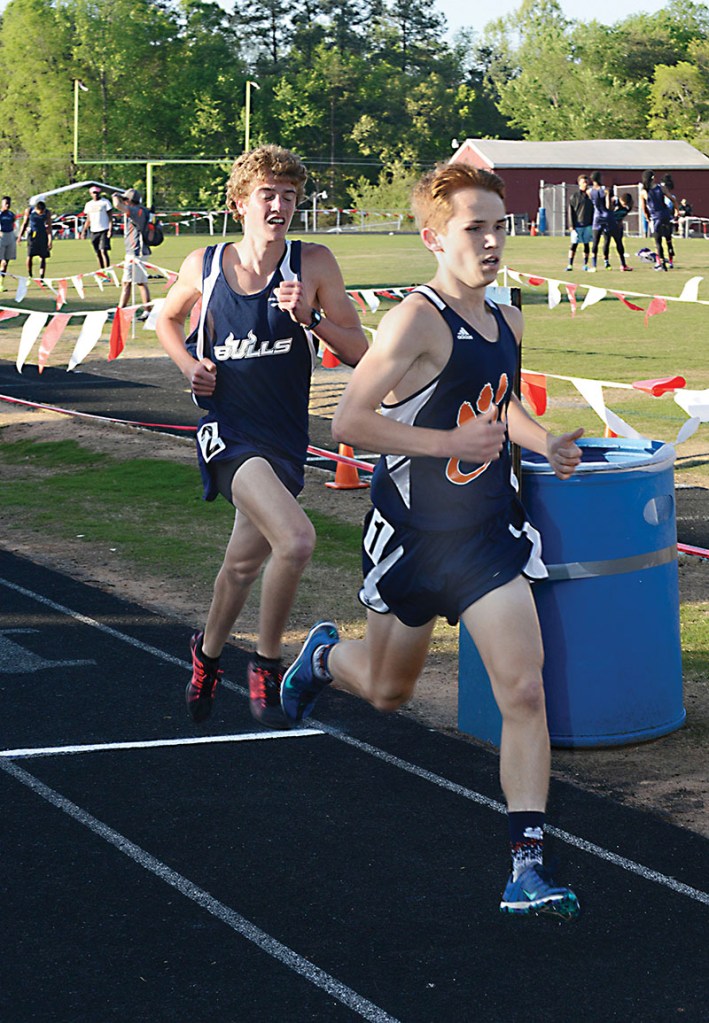 SALISBURY — Carson junior Zachary Marchinko was named Athlete of the Year for Rowan County track and field.
The award comes on the heels of recognition as the county’s top cross country runner in fall, so Marchinko turned a smooth double play for the 2014-15 school year.
It’s tougher to be No. 1 in track and field. In cross country you have to out-run people, but in track and field you have to stand out while being measured against outstanding jumpers, vaulters, hurdlers, sprinters and throwers.
The 5-foot-7 Marchinko stood tall. Not only was he Rowan County’s best bet in distance races, he experienced the most success of the county’s male track athletes at the state level.
“It’s an honor because of the great athletes in the county in this sport,” Marchinko said. “J.T. Sanders, Conor Honeycutt. On and on. There’s a lot of ’em.”
At the Midwest Regional, Marchinko qualified for the 3A state meet in two events with second place in the 3,200-meter run and third place in the 1,600.
Carson’s team points total wasn’t a factor to consider at the state meet in Greensboro, so Marchinko was able to focus his energy on one race.
“I believe the 3,200 is my best event, and I thought it was my best chance,” Marchinko said.
He finished as state runner-up.
“I was happy with second place but not really happy with my time (9 minutes, 41 seconds),” Marchinko said. “It was a hot day, but I should’ve gone faster. I was side-by-side with the winner (Weddington’s Matthew Conner) a long time, but I couldn’t out-kick him.”
In the South Piedmont Conference Championship, Marchinko competed in the maximum four events. He won the 1,600, took second in the 3,200, placed third in the 800 and helped Carson claim second-place points in the 4×800 relay.
In the Rowan County Championship, Marchinko gave the Cougars everything he had with first-place finishes in the 1,600 and 3,200. He also helped Carson take first in the 4×800 relay and third in the 4×400.
In both the county and conference meets, Marchinko was named Distance MVP.
Marchinko’s father, Robert, coaches Carson’s track and cross country teams. So it’s no surprise his son has been a runner a long time. But Zachary said he didn’t get serious with competitive running and training until the summer between eighth and ninth grade.
He’s come a long way quickly. He’s planning a short break in his training this summer, but he’s almost relentless now in his pursuit of excellence.
“I might take a week off,” Marchinko said.
Marchinko doesn’t have the length of some of his competitors, but he’s found his optimal stride and has elite endurance.
“The longer the race, the better for me,” Marchinko said. “I may be more cross country guy than track guy, although I’m sure I’ll do both in college.”
Marchinko ran personal bests of 4:23 in the 1,600 and 9:22 in the 3,200 as a junior. He’s experienced additional success since the school track season ended.

He won the 5K at the North Carolina Track & Cross Country Coaches Association Meet of Champions in Kernersville (15:37) and he ran a 4:27 mile for second place in the N.C. Runners/S.C. Runners Elite Tune-up at Marvin Ridge.
Second in the state isn’t a bad thing to be, but as runner-up in cross country and track and field as a junior, Marchinko is in position to take that last step as a senior.
“I’m hoping for another good season,” he said. “Hopefully, there will be some championships.”