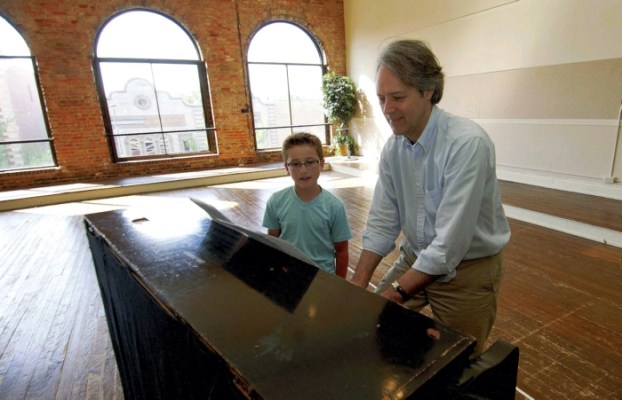 SALISBURY — Imagine the challenges Salisbury composer Marc Hoffman faced when he was commissioned to write a piece for the Fourth of July Chorus in Faith.

How would he find a way to do something innovative and different? How could he stay away from cliches and images common in patriotic songs, yet still make it a fitting tribute to a great country? How could he include some jazz influence and still maintain the classic choral writing he appreciates?

And how could he incorporate a solo, and who should sing it?

Hoffman, founder and artistic director of Salisbury School of Music, has addressed all of those questions with his gently flowing composition “In This Land,” which will premiere June 28 at Faith Baptist Church.

Beginning at 5 p.m., the choral performance kicks off the Faith Fourth of July week of activities. After the annual Sunday concert, Faith Legion Park (across from the church) opens for its first night of amusement rides and food.

Soon after last year’s choral performance, which brings in choir members from a multitude of churches, organizer Daisy Bost told Hoffman she personally wanted to commission him to compose a special song for the 2015 chorus.

Hoffman would have total control over the piece. “I just want it to be beautiful,” Bost said.

Bost, an alto in the Fourth of July Chorus since its first patriotic concert some 30 years ago, also sought a way to honor all the people who have sung through the decades and pay tribute to past director Dean Orbinson, current director Jason Harwood and accompanist Susan Trivette.

“I wanted to do something to show these people how important they’ve been,” Bost said. “It was just my way of saying thank you so very much for making this possible.”

This year, members of 19 churches will be represented and close to 50 chorus members.

Hoffman describes “In This Land” as uplifting and optimistic, with “a very inspiring feel.”  The composer says he probably followed “the patriotic path of ‘America the Beautiful,’ ” but his lyrics tried to steer clear of cliche.

A line most likely to stick with you from this new composition is, “Our strength comes from this land.”

Hoffman says his lyrics honor veterans in a subtle way, and he thinks the piece overall sounds more patriotic than religious. The song has some jazz, maybe even gospel influences, but Hoffman also made sure the warm, thick chords of the singers are featured.

Hoffman wrote a solo part for his piece and realized the young voice of one of his students, 10-year-old Gavin McDaniel, would set it off.

Gavin symbolically represents “the hope for the next generation,” Hoffman says. The youngster has a solo in the middle and is “the punctuation mark at the end,” Hoffman notes.

Gavin has sung in public before. He recently sang the national anthem at the groundbreaking for the Rowan-Salisbury Schools’ new central office on North Main Street. He also has had singing roles on stage with Piedmont Players and The Norvell children’s theater.

He says the nervousness he has felt so far hasn’t been so much about singing in front of a crowd. Rather, it has been singing with a roomful of adults who are much more experienced than he.

Hoffman confirms the talent in the chorus is enormous, and the singers learned “In This Land” quickly and are making it stand out.

“I was so pleased,” says Hoffman, whose trio also will be accompanying the chorus June 28.

By the night of the concert, the chorus will have had six or seven rehearsals.

“This song that Marc has written is so gorgeous,” said Renee McDaniel, Gavin’s mother, who has sat through some of those Sunday afternoon practices at Faith Baptist Church.

Gavin McDaniel will be a rising sixth-grader at Erwin Middle School. He takes guitar and voice lessons once a week at Salisbury School of Music, which is located upstairs at the Meroney Theater.

Why did Hoffman choose McDaniel for the “In This Land” solo?

A big band group under the direction of Ron Turbyfill also will be entertaining at Faith Baptist Church from 3:30 to 4:45 p.m. The free choral concert at 5 p.m. will feature nine songs, and as always, veterans and men and women now serving in the military will be honored.

“In This Land” is scheduled to be the fourth song presented. Bost thinks the composition could become a standard for the chorus in years to come, and she hopes other choruses will seek it out.

“I love it, it’s beautiful,” Bost says. “It talks about how our strength comes from this land and how we, with the help of God, have made it (strong). It’s pretty. It’s just a pretty song.”

This month marks the 60th anniversary of the 1955 Wake Forest College baseball team which won the national championship at... read more