‘Make the most of it’ class of 2015: graduations held around Rowan Saturday 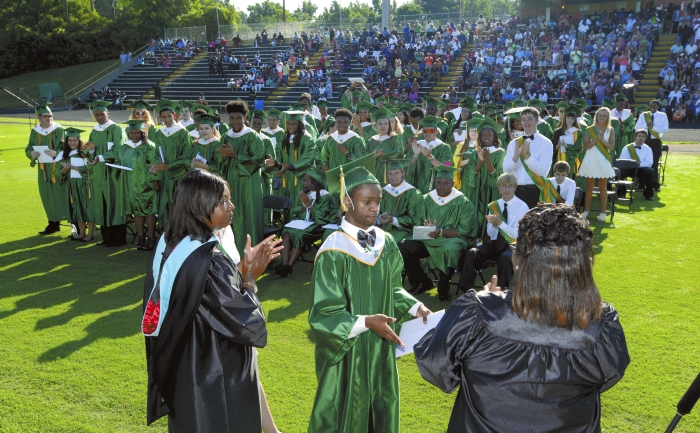 Jarvis Miller gets his diploma from Principal Fateama Fulmore while his senior classmates give him a standing ovation. He got out of his wheelchair to walk for his diploma. The North Rowan graduation was held in Eagle Stadium on campus for the first time in many years on a hot sunny Saturday morning. Photo by Wayne Hinshaw, for the Salisbury Post

Saturday was a day for reflecting on the past and looking toward the future as high school commencements were held across the county.

In all, over 1,300 students celebrated their graduation in Rowan as ceremonies were held for seven high schools throughout the day. Another 265 students graduated from A.L. Brown High School in Kannapolis.

At East Rowan High School in Granite Quarry, the ceremony took place in the football stadium under a rising sun shining down on the 243 seniors who received their diplomas. Parents, siblings, relatives and friends sat in the stands taking pictures and fanning themselves with commencement programs as the temperature reached 80 degrees shortly after 8 a.m. — when the ceremony was scheduled to start.

East Rowan Principal Julia Erdie told the graduates that life after high school will have its share of challenges.

“There is one thing that I can guarantee you will happen once you graduate. You will be faced with obstacles,” she said. But she urged her students to “rise above” the obstacles they face and “make great things happen” in the world.

He told his fellow graduates that the day marks the end of an era. “Each second held a new adventure,” Troutman said about the years he and his classmates spent together.

He also said receiving their diplomas serves as a symbol of their transition from childhood to adulthood. He challenged his classmates and the audience to forgive and forget the “drama” of the past and “proceed” into the future.

Salutatorian Jacob Durham told his classmates they have the potential to do great things in their lives.

“We have the tools to begin our next step. However, we must determine how we will use these tools to make our lives easier,” he said.

“Prepare to make an impact on those you encounter,” Durham said.

After the ceremony, friends and families gathered for pictures in the parking lot behind the school.

Ben Baker, who is going to Western Carolina University in the fall,  said graduating is an exciting and sad time. He said he will miss all the people he’s gotten to know over the years.

Lauren Trexler said she is anxious and a little scared about the future. She will attend Rowan-Cabarrus Community College to study nursing and said she will always remember her friends from high school.

Anthony Rozzel said he will remember the good times he had with friends and family. He is going to RCCC to study dental hygiene and said graduating is a “great relief.”

In her remarks during the ceremony, Senior Class President Grace Stokes used the game of golf as an analogy. “Timing is everything,” she said. Stokes played golf at East Rowan.

Be prepared for the bad days, she said, dig deep and don’t give up. We only get to play one round in the game of life, she said.