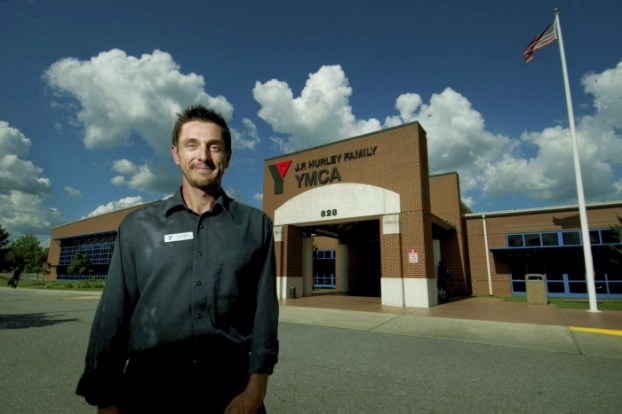 Richard Reinholz has come home to the J.F. Hurley Family Y. Truth be told, his entire career has been spent with the Y, but he hasn’t worked in his home county for nearly 15 years.

On April 20, Reinholz became executive director at the Hurley Y.

In 1999, Reinholz started his full-time Y career at the South Rowan Y as its fitness director. That job was followed by stints at Ys in Winston-Salem and Charlotte. He returned to the YMCA of Northwest North Carolina (in Winston-Salem) in 2014.

The Hurley Y will attain another level of quality with Reinholz at the helm, says Ester Marsh, associate executive director. “He’s a true leader, and he’s the kind of leader who’s perfect for me. He is definitely budget-driven — which we have to be. But he’s also caring. He leaves the programming up to me, but with his guidance. He’s really community driven. He likes community collaborations. We all feel really good about Richard.”

Reinholz first came to Rowan County in 1993 as an exchange student from Germany. He graduated from Salisbury High School in 1994, and played soccer and tennis at Pfeiffer University.

His plan was to experience American culture and learn English fluently, which he thought would help his future job prospects in Europe. The fact that he skipped 11th grade here and graduated from Pfeiffer about the time he’d be starting university in Germany appealed to him.

“Everything was paid for, which was nice,” he says. “Then I just stayed.”

He received a master’s degree from UNCG in 2003, while working full-time. At first, he was just happy to have a job at the Y. Then he realized it was so much more.

“After realizing the impact that the Y has on the community, and serving its Christian mission openly, any other opportunities didn’t have the same impact on me,” Reinholz says. “Having the Y in a community is special, and we have a good infrastructure here.”

The Y provides opportunities for programming within a Christian framework, he says. “And the Y does not turn anybody away for inability to pay.”

That’s demonstrated in the Y’s annual campaign. The Y raised some $120,000 in 2014, but gave away $900,000 worth of scholarships. The difference is made up through grants, United Way funding and memberships. The United Way contribution goes specifically to youth programming scholarships.

Membership is holding steady at the moment throughout the Ys in Rowan County, Reinholz says. “When the economy was bad, in Charlotte, we actually saw increased usage, but decreased dollars. I guarantee you that’s the same thing we saw here.”

With so many folks who need assistance, he’s looking to save money elsewhere.

That includes developing a renewable energy program. For example, he’s in the research phase of developing a lighting project, replacing the facility’s 300 lights with LED lighting. He’s also looking into the possibility of utilizing solar power.

Saving money also includes having nimble staff members who can work in multiple areas. It includes surveying fitness classes to make sure attendance isn’t too low.

“At the end of the day, every dollar saved stays within the Y,” he says.

Having a newer facility helps, but the building will soon be at the point where its HVAC and roofing need to be replaced.

“We need to communicate with members why we’re asking for funds, so they realize where the overhead expenses lie,” Reinholz says. “We’re a very large facility, and the amenities that come with membership are second to none.”

Reinholz is eager to forge partnerships in the business community. He wants to grow the relationship with Novant, as well as corporate wellness programs.

Fundraising, of course, is another area of focus. One staff member called the Annual Giving Campaign the best-kept secret in town.

“We’re a little bit upside down in the amount we offer in assistance compared to the dollars we fundraise,” Reinholz admits. “Most associations give away double what they raise. But that’s a good statement to be able to share with the community.”

The major donors who funded the Hurley Y are still involved and interested, Reinholz says, and he’s in the process of getting to know those donors. “We want the Y to continue to be what they want it to be. I want to maintain the relevancy of this Y in the community for years to come. I see the Y’s impact in the community that I live in. You take away the Y in this community and what do you have? You have a big void.”

Jamie Morgan, the Rowan County Y’s CEO, is glad to have Reinholz aboard. In the interim before Reinholz was hired, Morgan filled in at the Hurley Y. He’s now doing the same thing at the South Y.

“We did a national search for this position,” Morgan says. “Richard and I had been in conversation for the last couple of years, and he’s continued to live in Rowan County. The opportunity came open and he applied. He was our unanimous choice.

“You consider his wealth of knowledge in large Y organizations with the fact that he does have Rowan County roots. That combination is a really good fit. Already, I can tell he’s going to be solid. He’s smart and analytical. We feel very fortunate to be able to get him.”

Reinholz and his wife, Kelly, have been married for 10 years. They have a son, Ayden, 8, a third-grader at Faith Elementary, where she teaches.

“I never thought I’d live in a town with no stoplight,” says Reinholz, whose native Dormagen is near Cologne.

His host parents were Crystal Lomax and the late Chuck Lomax. Reinholz still keeps in touch with his host mom, a local realtor. His sister lives at Lake Norman, and his parents visit frequently from Germany.

The Reinholzes attend First Baptist Church, and enjoy time on the lake, swimming, four-wheeling and watching movies. Reinholz can’t tell you anything about the summer blockbusters, but he’s all about the Disney and Pixar releases.

He found “Despicable Me” witty, and can’t wait for the “The Minion Movie” to come out.

He’s happy to talk movies or fitness or whatever members would like to discuss.

He works different hours at the Y in order to meet members and staff alike. He is part of the rotation for manager on duty on Friday nights, as well as the Saturday and Sunday shifts.

She got satisfaction: China Grove native sings backup for the Rolling Stones

You can’t always get what you want, but if you try sometimes, you might find, you get what you need.... read more